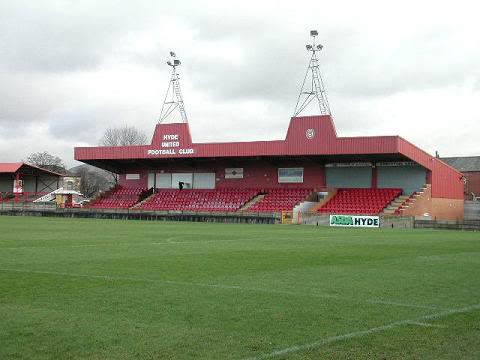 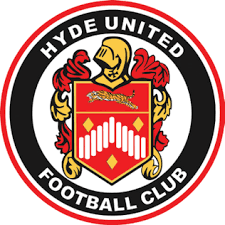 Hyde F.C. was founded on 27 July 1885 at the White Lion pub in the town centre. They played on a field near the Bankfield Hotel, until 1898 when they moved to Townend Street and set up a club headquarters at the Gardeners Arms pub. They moved to Ewen Fields in 1906 after merging with Hyde St. George’s and taking their place in the Lancashire Combination. In 1917, Hyde FC folded because of what was termed “war reaction”.

Hyde United formed in 1919 after demands for a football club to be re-established. United was added to the name because of a match between two groups which used to meet in the market place: the Forty Gang and the Discharged Soldiers and Sailors, both of which groups were very active in the resurrection of the club. After one season in the Lancashire and Cheshire Federation, Hyde joined the Manchester League and by 1930 had won it five times and won the Gilgryst Cup twice. In the 1920s, players wore black-and-white halved shirts for a spell. The club moved into the Cheshire County League in 1930 and won the League Challenge Cup four years later. The decade after the Second World War proved to be a purple patch for the club. In 1946, they won the Cheshire Senior Cup, the first of many trophies to arrive at Ewen Fields during the next ten years. In 1953, Hyde won the League Cup followed by a league and cup double a season later. The 1955–56 season saw the club retain the championship and finish as runners-up in the following three seasons.

They reached the FA Cup first round in 1954 only to lose 5–1 away to Workington, who were at that time managed by Bill Shankly. Hyde were founder members of the Northern Premier League in 1968 but financial strains took their toll and the club rejoined the Cheshire League in 1970 where they remained for 12 years. They won the League Cup in 1973, and in 1981 finished as runners-up in the league and winners of the Cheshire Senior Cup and The League Challenge Shield.

A year later, with Les Sutton as manager, Hyde swept the Cheshire League board, and with the installation of a number of supporter’s club-financed ground improvements, won election to the Northern Premier League. The first year back saw the club score 91 goals. The following season they reached the first round of the FA Cup where they lost 2–0 at Burnley, with Peter Wragg as manager, also reaching the Northern Premier League Cup final— only to lose on penalties to South Liverpool. However, they were back in the final in 1986 when they beat Marine 1–0. In 1986, as a result of the changes introduced following the Bradford City stadium fire, the club, in conjunction with Tameside MBC, erected a new main stand and laid a baspoturf pitch.

In 1993, Pete O’Brien was appointed manager for a second time, but only remained in charge until the end of the season, when he resigned to take-over at Droylsden. Mike McKenzie took over from O’Brien in June 1994. His first season in charge showed much future promise when Hyde reached the first round of the FA Cup but then lost 3–1 at home to Darlington, to be followed by elimination from the FA Trophy by Kidderminster Harriers in the semi-final. During the 1995–96 season, Ewen Fields’ astroturf pitch was relaid in grass, then played host to another FA Trophy semi-final, this time against Northwich Victoria. After Mike McKenzie left the club in 2001 by mutual consent, former player Dave Nolan took over as manager. After an unsuccessful 2001–02 season, Nolan was sacked. In October 2002 former Manchester United player Gordon Hill was appointed as manager, but remainder at the club for only two months. Following his departure, Hyde gave the job to former Leigh boss Steve Waywell, though he could not prevent the club’s relegation to the Northern Premier League Division One in 2003. Waywell assembled a new team, and they won the Northern Premier League First Division at their first attempt.

Hyde United won the Northern Premier League Premier Division title in 2005 for the first time in their history, a controversial win as Hyde were awarded the title following an appeal to the Football Association. The title was originally awarded to Farsley Celtic after the expunging of Spennymoor United’s results because they were unable to complete their fixtures that season (with a Hyde fixture one of those not played). On appeal, this decision was overturned and Hyde, along with other teams who had not played Spennymoor twice, were awarded three points for a “0–0 win”—sufficient to secure Hyde’s first Northern Premier League title.

During their first season in the Conference North league, the Tigers started slowly, but a run of better results mid-season saw them finishing 11th, with 56 points from 42 games. Further mid-table finishes followed in subsequent seasons, then Waywell left the club by mutual consent in October 2008, after a poor start to the season saw Hyde collect only five points from their first eight games and at the same time exit the Conference League Cup in the first round. He was replaced by Neil Tolson along with Chris Brass, who left the club a few months later. Hyde finished the season in 20th place and faced relegation, only to be spared when King’s Lynn were demoted for failing to ensure that their home ground met Conference North standards.

On 24 September 2009, the club was officially wound up at the High Court in London, with debts of around £122,000 to HM Revenue and Customs. Over the following few days, major efforts by club officials, supporters and players, which included a bucket collection at a Manchester City Premier League match, raised sufficient funds to lodge an appeal against the High Court decision. This was heard on 30 September 2009, and the original winding-up order was rescinded, with Leicestershire businessman John Manship stepping in as owner.

Hyde finished the 2009–10 season in 15th place after a mid and late season fight back during which they lost only one home fixture. Before the start of the 2010–11 season, the club changed its name to Hyde F.C. and Ewen Fields underwent a complete makeover, turning the ground from red to blue and switching to white shirts and blue shorts as part of a sponsorship deal with Manchester City.

In the second half of the season, club chairman Steve Hartley and secretary Tony Beard both resigned from the board, and this was later followed by the sacking of manager Neil Tolson. Tolson was replaced by Scott McNiven and Steve Halford, who acted as joint caretaker player-managers, and Hyde escaped relegation on the last day of the season.

Ahead of the 2011–12 season Hyde appointed Gary Lowe as manager, with Martyn Booty as his assistant. Their first 10 matches of the season saw Hyde win every match, equalling Hyde’s best ever start to a season dating back to the 1925–26 season and also breaking the record for the best ever start to a season in Conference North. On the back of this incredible start, Hyde finished the season as Conference North champions following a 4–1 win over Boston United in their last home match of the season, gaining promotion to the Conference Premier for the first time and breaking the club’s record for the highest points total in their history with 90 points. Following the end of the season manager Gary Lowe and assistant Martyn Booty resigned, to be replaced by Scott McNiven and Gavin McCann, respectively.

The 2013–14 season was a disastrous one for Hyde FC, losing numerous matches including both the Boxing Day and New Years Day fixtures to Macclesfield Town, both 3–0, including a Scott Boden hat-trick at Ewan Fields. After a two-year stay in the Conference Premier, the club was relegated back to the Conference North after a 3–0 defeat to Alfreton Town on 11 March 2014. The club only recorded one win in the whole of the 2013–14 campaign— a 2–0 win away at Welling United. They finished the season in 24th place— bottom of the table, gaining only ten points throughout the whole season— a league record low points. With the club nine points adrift at the bottom of the Conference North in January 2015, the club parted company with manager Scott McNiven. McNiven was replaced by former manager, Gary Lowe.

Lowe was not able to prevent a second successive relegation as Hyde finished bottom of the league, returning to the Northern Premier League after ten years in the Football Conference. At the end of the season Hyde’s deal with Manchester City ended, and the club’s name reverted to Hyde United. On 27 June 2015, the club announced that John Manship had offered to hand over control of the club, it had been successfully taken over by the Hyde United Supporters Club. At the end of March 2016 with Hyde United just 3 points above the drop zone, the decision was taken to part ways with manager Gary Lowe. The appointment of Darren Kelly was made to prevent a third successive relegation in three seasons. Kelly was unable to guide the club to safety and they were relegated to the Northern Premier League Division One after a 4–0 defeat at home to Nantwich Town.