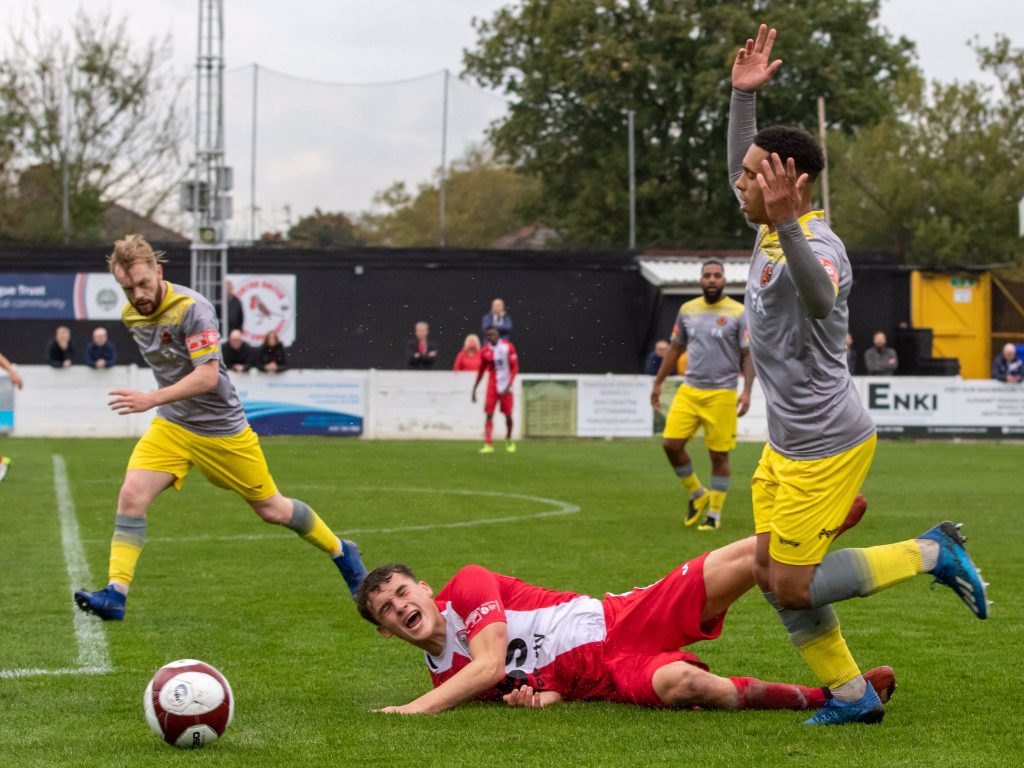 Mickleover secured their first away win of the season in the Northern Premier League, with a comfortable 3-0 win over Ashton United.

Gaffer John McGrath had to make one change from the team that started at the St Albans Cup tie, due to Mason Warren’s suspension.

Mickleover went into full attack mode from the kick off, with Webb’s left foot cross almost finding Beavon in the box in the first two minutes. Three minutes later the roles were reversed, as Beavon put Webb through, but his shot was easily taken by Ashton’s keeper Dan Eccles.

Six minutes in and Sports had a corner from which Butler rose above the home sides defence to head in for 1-0 to Mickleover.

Bennett was the next to go close, with another header from a testing cross after 11 minutes, before play suddenly changed ends and Ashton had a great chance to equalise, when centre back Joel Bembo Leta was alone on the far post and failed to make contact with the ball.

They soon rued their missed chance as after Bacon played Webb through and his shot was again saved by Eccles, Beavon made it 2-0 on 16 minutes, with a giant leap to send his header deep into the left hand corner of the Ashton net.

After further two minutes Milner almost got a third goal, when his attempt found its way through a host of legs to go just wide of the post.

Mickleover keeper Hawkins had a rare touch when he saved a tame free kick from Millenic Alli, before Sports were back on the attack. Milner and Beavon shared a one two, but on the return Milner was caught in possession.

Webb had another half chance before half time and Beavon tried another pass to Webb before the whistle, but that was cut out before it reached its destination, so it remained 2-0 to Mickleover.

Into the second half and it was more of the same, Bacon scuffed an early shot after a pass from Webb and Eccles found himself tested again after 48 minutes by another effort from Webb.

Just after Milner had been yellow carded for a push, Sports were actively seeking a third goal and Bennett provided it with a jinking run into to the heart of the Ashton defence, crashing the ball home from an ever tightening angle after 61 minutes for 3-0.

Three minutes later there was almost a fourth when a poor clearance from Eccles rebounded to Beavon, who then hit the post with his reflex shot.

After Sports keeper had to tip an Ashton shot over, Sports began substitutions, with Satchwell, and McGrath on for Wright and Milner for the last 23 minutes.

Walshaw then came on for Beavon and the final seven minutes and just missed out on a fourth goal for Mickleover when he failed to connect with a Webb cross with four minutes left.

So the whistle went for a positive 3-0 win, which moves them into sixth place in the table, with Tuesday nights visit to Buxton to look forward too.