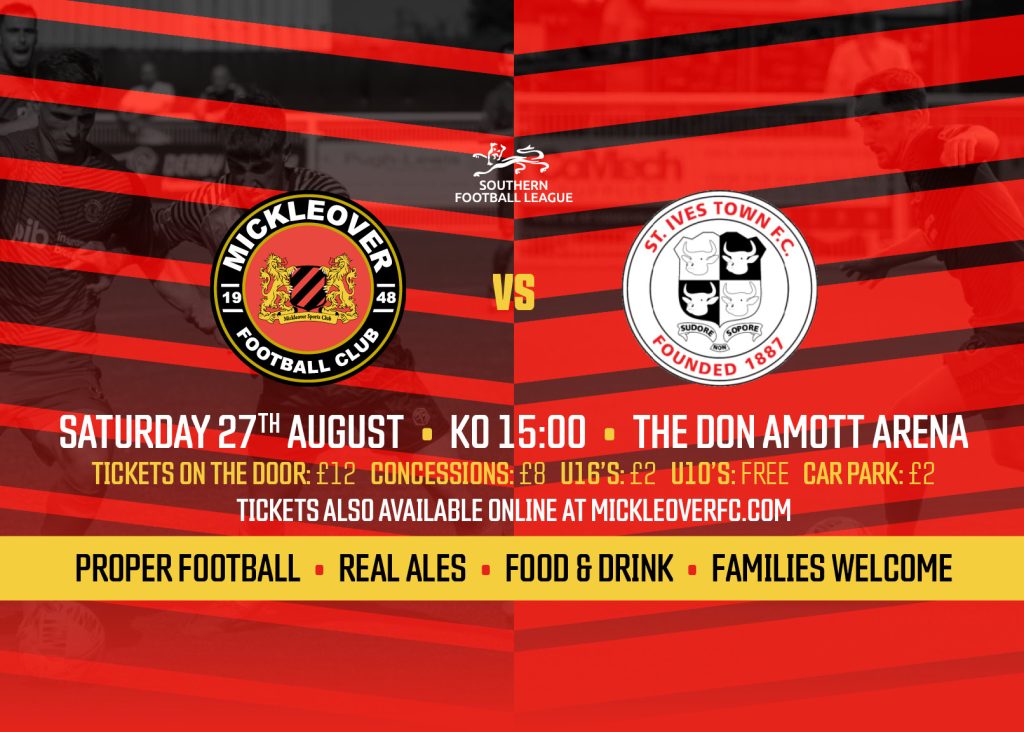 Still seeking that first win of the season, Mickleover host second in the table St Ives Town at the Don Amott Arena on Saturday.

Manager Ricky Marheineke has been in charge for nine years, and has had three wins and one defeat so, at the hands of Needham Market. Last Saturday they were 2-0 winners over Kings Langley at home.

Keeper James Goff came from Lincoln Utd in October 2021, having started as a Northampton Town junior. He’s played for Banbury, Wisbech and Spalding too.

Right back Julien Saka was a pre-season signing from Soham Rangers, who was previously at Tooting & Mitcham.

Left back Johnny Herd is another new arrival. The former Southend Utd youth player, moved on to Ebbsfleet, Bishops Stortford and St Neots and had a couple of seasons at Peterborough Sports before arriving at St Ives.

Michael Richens is a midfielder and team captain. He was originally at Peterborough Utd but spent much of his time out on loan. He made a couple of first team starts and joined Stevenage on his release. He then moved on via Farnborough, Hemel, Bishops Stortford and Biggleswade, before joining St Ives from Kettering in July last year.

Jordan Williams plays centre back and began his career at Cambridge Utd. Moves to Brackley, Cambridge City, Stratford and Stourbridge followed, before a return trip to Stratford preceded his move to St Ives pre-season.

Defender Callum Milne is in his second season with our guests, having arrived from Harborough Town. He started as an Aston Villa junior and has also played for Kettering, Wisbech, Eynesbury and Bedford.

Myles Cowling is a midfielder on loan from Cambridge United. He has made one start this season and was previously loaned to St Neots.

Striker Jonny Edwards was another summer singing from FC Romania. He started at Peterborough but has had experience in Leagues One and Two during his various moves. He was loaned to Bishop Stortford and St Albans before moving to Hull City, where further loans at Accrington and Woking following, before a move to Halifax.

He has since played for Maidstone, Biggleswade and Royston, before spending last season with Romania.

Dylan Williams is another midfielder who started out at Cambridge Utd. St Neots, Biggleswade and Lowestoft followed, before a return trip to Biggleswade preceded his St Ives move two years ago.

Midfielder Enoch Andoh is a Ghanian international at Under 17 and 20 levels. Much of his early career was spent abroad, with FC Porto and Limassol, before a spell with Port Vale, where he played in League One. He then played for Whitehawk, Nuneaton, Macclesfield, Hednesford and Stratford, arriving at St Ives earlier this month from Biggleswade.

Nabil Shariff is a striker who has already scored four league goals this season, including a hattrick against Stratford. He started at Rushden & Diamonds, moving to Banbury, Tamworth, Oxford City, Kettering, Banbury, Corby, Stamford, Alfreton, St Neots and Stratford. He came to our visitors in July 2020 after a third spell at Rushden.

Edmund Hottor is another Ghanaian midfielder. Most of his early football was spent in Italy, which included spells at both AC and Inter Milan. He came to the UK with Kettering in July 2018 from Sliema Wanderers in Malta and was at Banbury before coming to St Ives in December 2019.

Former Boston Utd junior Owen Sherriff is a young centre back yet to make his league debut, after arriving earlier this month.

Right back Kane Lewis is another new arrival, yet to make a start too. He was with Brentford and Liverpool, before playing in the Welsh League with The New Saints and Cefn Druids, where he gained Champions League and Europa League experience.

Midfielder Andrew Osei-Bonsu is another Ghanaian, who started at MK Dons. Corby, Wealdstone, Dunstable and Larne FC came before his first spell at St Ives. He also played for Billericay before moving to East Fife last season and came back to St Ives for a third time in March.

Ethan Johnston is a striker signed from Banbury last November, after starting out at Northampton Town.

Midfielder Tyrone Barker arrived last November too from Basildon, having been at Bowers & Pitsea and Heybridge Swifts previously.

Kick off as usual is at 3pm WE NEED YOUR SUPPORT!!!