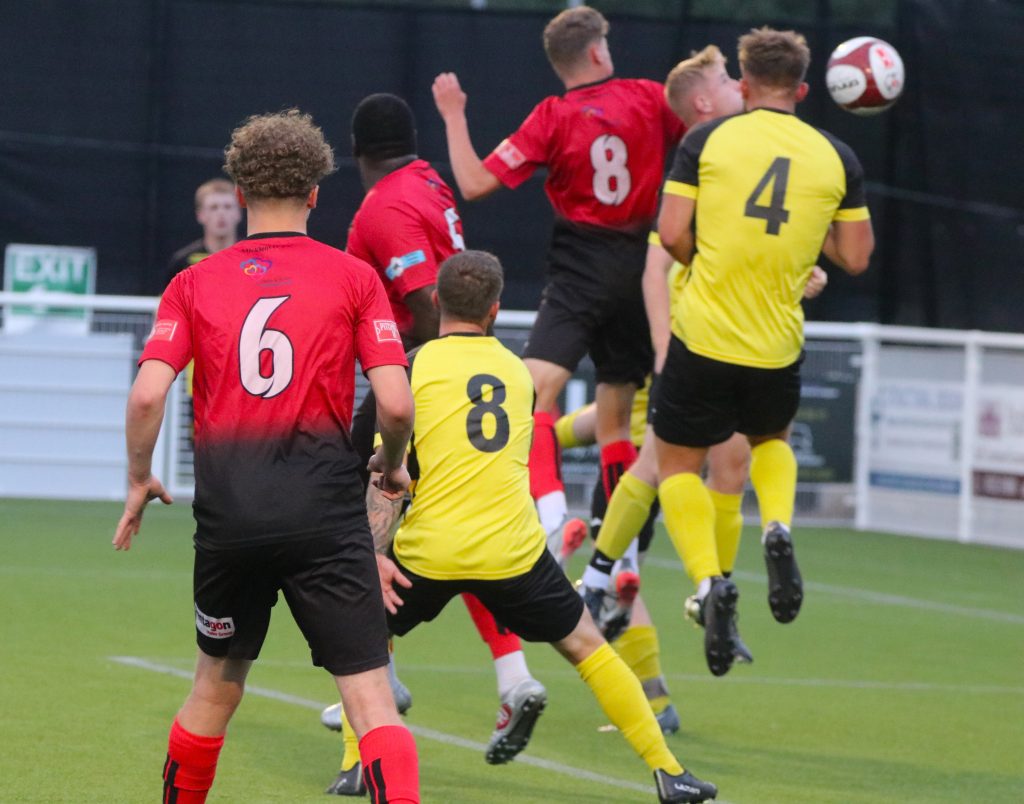 It was virtually the Mickleover FC youth team facing Holbrook in last nights Central Midlands League Division One South match, but they had to settle for 2-2 draw.

Only two minutes into the game Davidson-Miller was fouled to earn the first free-kick, but Ferron shot wide from Mills kick.

Three minutes later Holbrook had their first attack but failed to trouble Bill in the Mickleover goal.

As Mickleover took the upperhand Mills headed just wide from an Atwal cross, before Leighton fired in a telling cross after an overlap on the left.

Mills was trying to get long balls through to Davidson-Miller, but Holbrook were then quick on the break after a couple of interceptions, but Bonser,Rock and Atwal cleared any danger.

After 19 minutes the Holbrook keeper had to charge out of his goal, with only metres to spare before Davidson-Miller connected with another long ball.

The first team striker then followed up a minute later with a good hold in the box, turning and shooting just wide of the post.

It was Mills and Davidson-Miller combining that saw Horleston score the opening goal after 25 minutes, a crisp effort from just inside the box buried in keeper Morley’s left-hand corner. 1-0.

Both Leighton and Ferron were working the overlaps well and a Ferron run was just short of connecting with Davidson-Miler again on the half hour.

Atwal had a long-range effort just over the bar and then 37 minutes in and Horleston found Mills, whose shot was deflected for a corner.

Holbrook had another shot just over the bar with five minutes left in the second half. But Mickleover came back with Horleston’s shot blocked from a Parr cross.

Bonser then lost possession and Holbrook were through, forcing a fine save from Bill, before Parr’s shot was deflected onto the bar, and Mills followed up with a cross, just missing the heads of both Davidson-Miller and Ryder.

Holbrook started the second half with more endeavour to seek out the equaliser. Bonser managed to get back to intercept the first break, but only two minutes later Holbrook were level with a 49th effort.

The central defence of Bonser and Rock was split wide open, leaving Holbrook’s Barnes with a free shot down the middle and no chance for Bill, 1-1.

Both Leighton and Ferron continued to put the crosses in, before Parr had a shot saved after 51 minutes.

The Holbrook goalkeeper Morley then went off injured, but Mickleover failed to capitalise or trouble the sub keeper.

Just over the hour and Mickleover were losing control in midfield, but Holbrook’s efforts were off target.

Mills had a tap cleared off the line following a 65th minute corner, Davidson-Miller was thwarted one step from a shot in the box and Parr had another shot deflected for a corner.

But 68 minutes in and Bonser was outpaced by Holbrook’s Millinchip and fouled him from behind, just outside the box, almost identical to the penalty given away in last week’s Youth Cup match.

It was a straight red card and Mickleover then subbed Mills with Roberts-Downing, before Holbrook’s free kick was sent well wide.

There was another defensive mix-up in the 73rd minute, but Holbrook shot wide after a free shot on goal.

A minute later Ryder had a good run before cutting inside, but Davidson-Miller’s end shot was too weak. Ryder was then on the ball again, but his final pass was just behind Davidson-Miller.

Mickleover tried to push forward and there was another Davidson-Miler shot straight at the sub keeper, before Parr had a blast blocked.

Ferron then cut in from his own overlap, but his shot was too weak too. But Horleston should have scored his second, but he failed to connect with another Ferron cross.

Ryder had a cross or shot just wide of the right-hand corner, but just when it looked to heading for a draw, the Mickleover defence was split wide open down the middle yet again by Smithurst and it was 1-2 after 84 minutes.

But three minutes later Leighton’s dogged perseverance saw him fire another cross into the box, there was a scramble as both Ryder and Davidson-Miller going for the final touch as they made it 2-2.

Mickleover were close to a winner when Davidson-Miller got through again after a Ferron cross, but a last-ditch tackle thwarted the effort.

Ironmonger came on for Ryder in the closing minutes, before Ferron had a shot high and wide, as the game ended with just the one point for the home side.