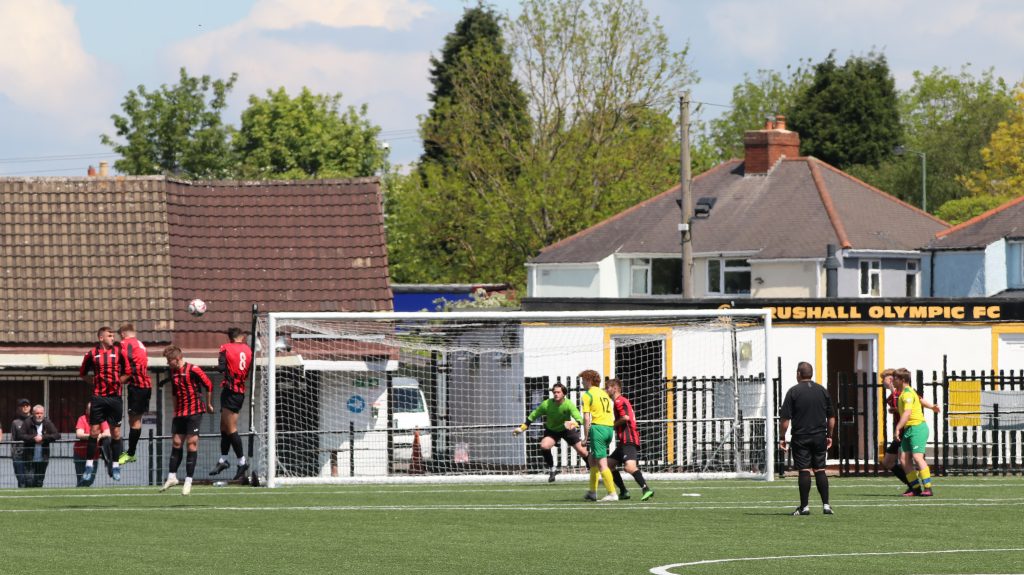 Runcorn Linnets had already won the first of their ESPFA Play-off games, but it was all one-way traffic as they faced Mickleover Reds at Rushall.

Only 30 seconds into game and Bobby Battisson picked up on some slack defending, finding Fin Barker who slotted home 1-0.

Five minutes later Ben Lewin and Barker worked well on the overlap, but just ran out of pitch before a shot was taken.

We didn’t have to wait long for goal number two though, with George Atwal firing into the roof of the net, after a classy build-up between Brodie Carter and Josh Satchwell. 2-0.

Mickleover had a free kick 10 minutes in, when Ted Stevenson was tripped on the edge of the box, but Jacob Edge-Lucas’ kick was just wide.

With Runcorn barely getting out of their own half, they hit the post on their first real break. 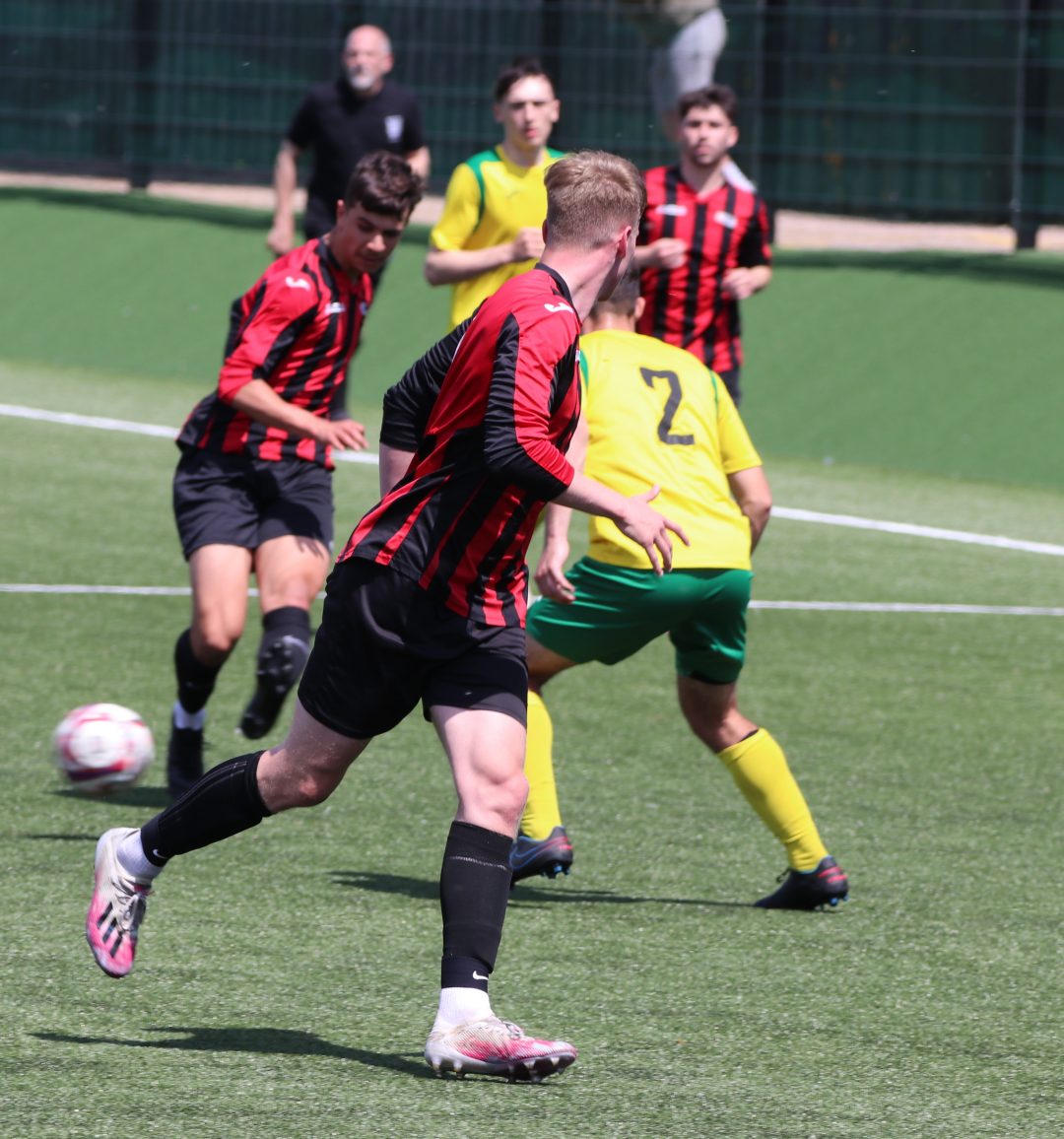 Lewin then had a good try blocked after 15 minutes, before Battisson found Barker, whose close range shot was blocked by the keeper.

Lewin’s defensive duties were called upon after a Runcorn free kick was cut out, before Will Robinson burst from the defence to find Battisson in space, shooting wide of the post.

With both wing backs pushing forward, Cameron Anthony and Robinson were the only Mickleover players to stay back. There was a free kick after Battisson was fouled again, and a combined effort from the majority of the team set Barker free, earning another corner after 27 minutes.

Tom Smith had a rare touch of the ball when he raced from his line to kick well clear as the half hour mark approached, quickly followed by a charge down the wing from Edge-Lucas after he intercepted, almost putting Carter in the clear.

Carter was close to adding to the goal tally in the 33rd minute when Anthony sent Lewin on a run, before his precise cross was inches from the strikers head.

Battisson had a try high and wide, then Atwal, Barker and Carter combined. As Barker had no space, Atwal collected and fired over the bar.

It was soon 3-0 though when Carter was on target after 41 minutes. Another Lewin cross had found Barker, whose pinpoint pass set Carter up. 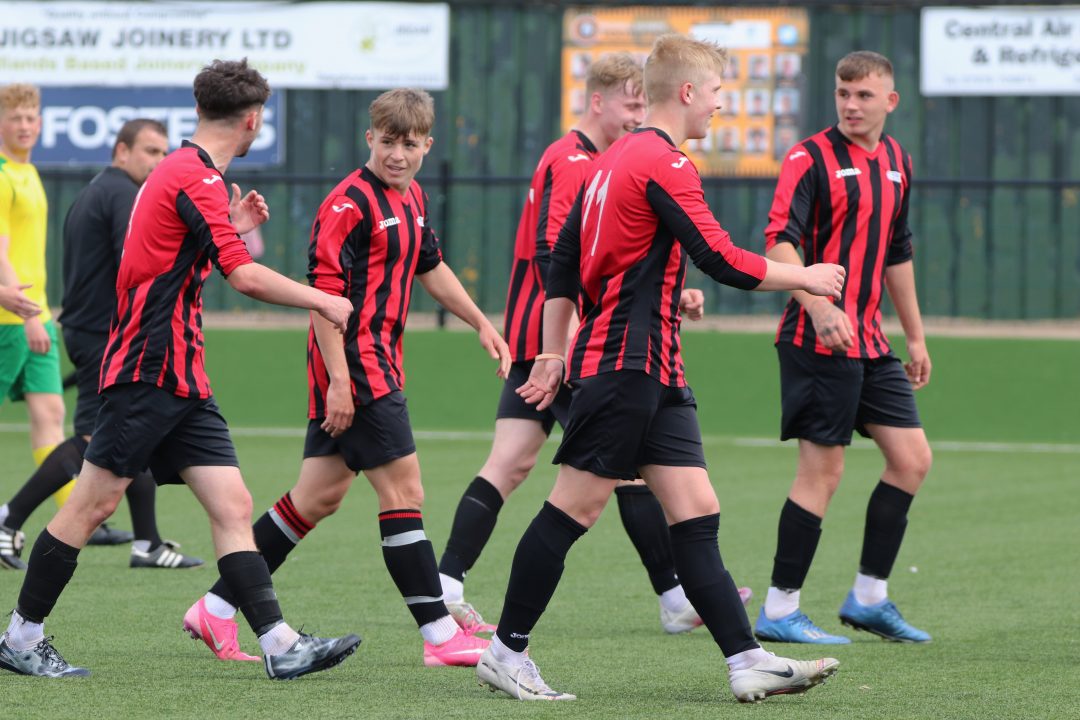 From 3-0 at half time, Mickleover were straight back on the attack as the second half got underway. Barker put a shot across the face of the goal after 48 minutes and a minute later Barker’s attack left Atwal shooting over.

Battisson and Barker then combined with yet another chance, only to be denied by the keeper’s legs. It was another Barker and Battisson run than earned goal number four. After being tripped in the box, Barker made no mistake from the penalty spot. 4-0.

Runcorn had a random shot well over after 58 minutes, but there was only one team in the game.

Edge-Lucas hit the post after 68 minutes and four minutes later Stevenson had a fantastic run to set up Barker, who took it around the keeper and fired into the roof of the net for 5-0.

Only two minutes later Barker put Carter through but the keeper intercepted, then Stevenson came off to make way for Kai Moore. 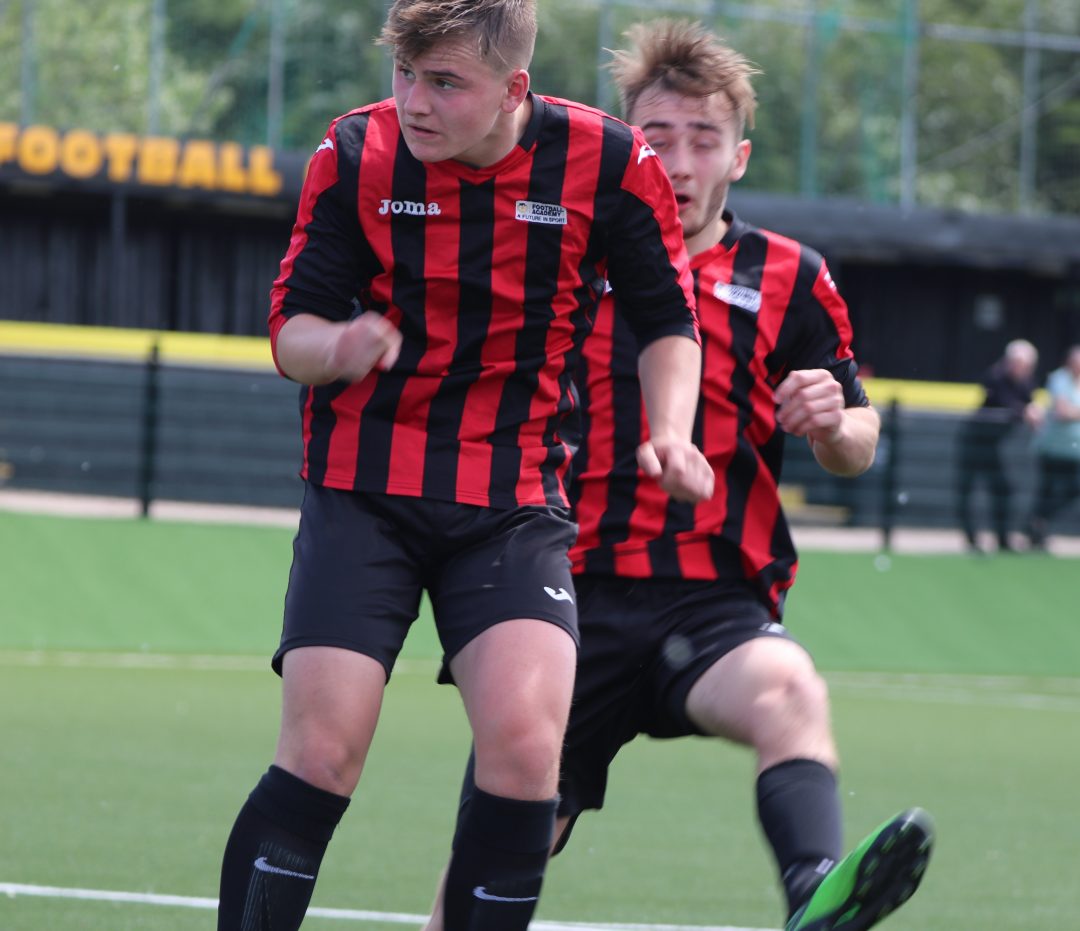 It was soon 6-0 when Battisson was tripped in the box and recovered to take the penalty himself after 76 minutes. Lewin then fired just over from another free kick.

10 more minutes and it was goal number seven, after the Runcorn keeper lost the ball, Battisson picked it up and slotted home 7-0.

There was still more to come, with Niall Cole on for Carter, it was 8-0 with two minutes left. Edge-Lucas had burst down the wing and was also on the end of it, with a top corner shot 8-0!

Kyran Ward and Joris Yates were both late subs for Lewin and Edge-Lucas, leaving Mickleover to play possession football for the last few minutes.

Moore had a half chance late on and  Smith in the Mickleover goal had one brief threat to his clean sheet, but Moore played it back for him to clear confidently.

So the Midlands Division was sewn up last week, and   victory in the first play-off, leaves the Reds in good stead for the final game against Chesham Utd in two weeks.