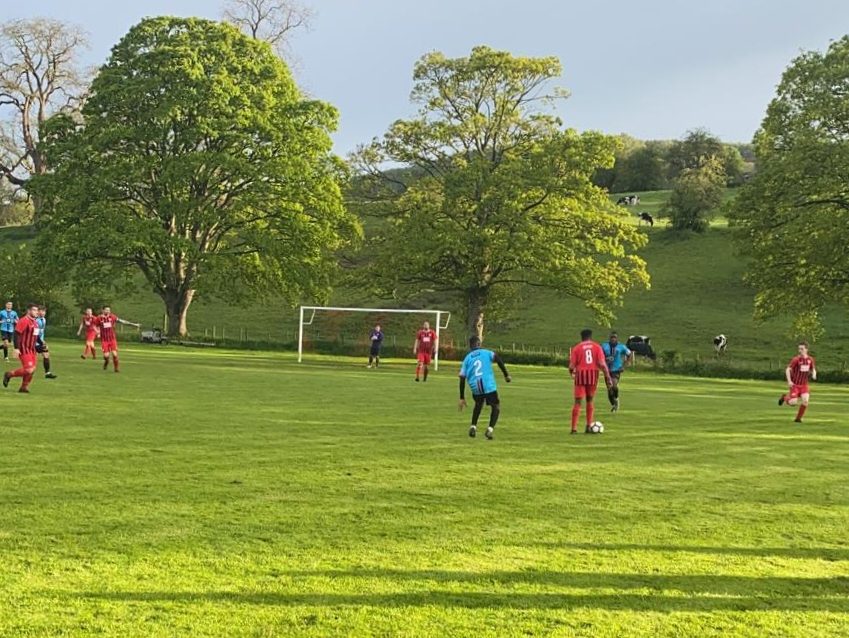 The Mickleover Reserves team headed back up the A6, unless you went up the A38 and across the A615, to the scenic setting of Rowsley, situated in a little Swale at the edge of the Peak District.

I also went up and watched their quarter-final win over Bentley and now my Sat Nav thinks my home address is Peaktor Lane, Rowsley! The results of the first two games were one win each, however being the tactical geniuses that Aaron and I are, we inveigled a 2-1 defeat in the last game, so as we would get an away tie in the quarter-final and not have to pay the officials!

But one thing guaranteed at Rowsley is a friendly welcome and post-match.

Mickleover started really well with some crisp passing and good movement supporting players on the ball. The central defensive pairing of Ferdinand and Fuertado were solid and well balanced, making good decisions on when to play out or give it the wellie.

With the stability of Morrison in front, it allowed the industrious pairing of Battisson and Milner to pressurise Rowsley into errors, so we got the ball back.

After 15 or so minutes Mickleover had fashioned chances for Monteiro, Ayetine and Tefera, with the home keeper being called into action.

Prior to the game, we talked about the importance of set pieces – corners and free-kicks and how having a plan would work in our favour. It was therefore pleasing that from a free-kick from our right side, just to the right of the penalty box, about 21.5 yards powerfully struck by Eccleshall between the posts that we took the lead. 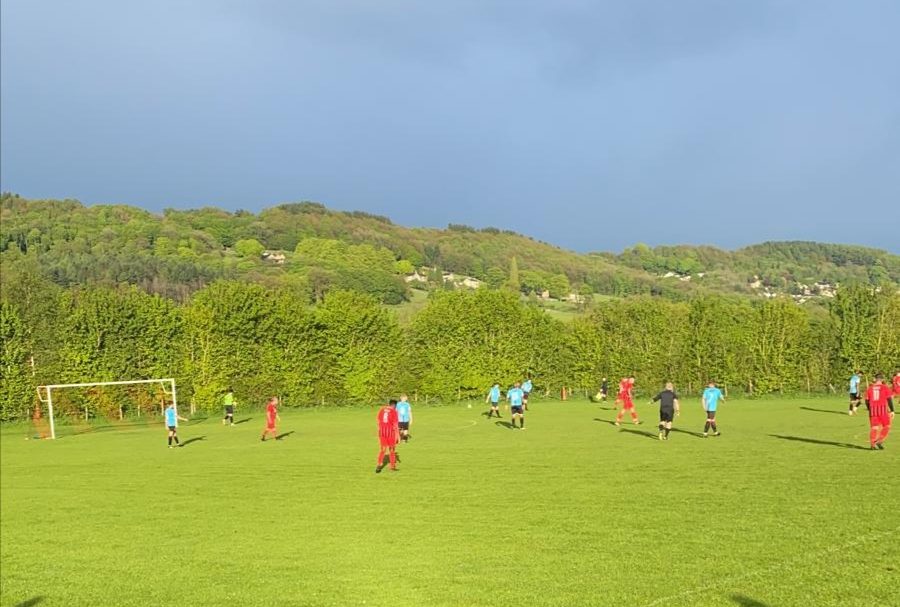 Monteiro had gone close in the opening minutes, after a fine ball from Ayetine on the left. Then Tefera found Ayetine, but his effort was saved by the Rowsley keeper, before Milner put another telling ball into the box, from a Massampo feed.

15 minutes in and Battisson lofted a corner in, finding Milner in space, but the final header was over. Both Battisson and Milner went close again as the pressure built on the home defence and it was no surprise when Tefera opened the scoring.

It was a free kick from Edge-Lucas after Monteiro was fouled, but the keeper did well to parry the shot and his next action was to fetch the ball out of the net, after Tefera had controlled the high spinning ball and guided the ball carefully into the corner.1-0 Mickleover.

Only five minutes later Monteiro was on another run, beating players to pile more pressure on the Rowsley defence.

The tails were up and in the next period we played some sumptuous impressive football and not much later followed a goal of quintessential beauty.

The ball got played out to Monteiro just in our half, he set the ball back to Tefera, who spun with one touch and slotted an exquisite through pass in front of the onrushing Monteiro. There was still work to be done as their centre backs had come across to close down the danger, but Monteiro took them both out, sidestepping inside before bending the ball to nestle in the corner of the net. 2-0.

Monteiro continued to run rampant through the defence, ably supported by Ayetine, Morrison, Battisson, Tefera and Milner, but after 35 minutes Rowsley had their best chance of the game, when Smith had to charge off his line to try and retrieve a short back pass. The striker was their first but his shot was wide of an almost open goal.

There were penalty appeals after Monteiro was fouled again, but it was still virtual one-way traffic.

Just before half time however Rowsley pulled one back, with a shot from 10 yards out, which Smith misjudged 2-1.

To Rowsley’s credit, they continued to fight and it was a good goal from their point, but one which we should have stopped.

Collecting the ball about 30 yards out on our left he ( the scorer) drove into the centre area and got away a shot that went through Morrison’s legs and trundled with a wee bit of pace into the net near the left-hand post. If there was a good time to lose a goal when 2-0 up, the minutes before halftime as the momentum they could have gained was stopped by the interval.

There was still a chance for one more shot from Mickleover before the half time whistle, as yet another foul on Monteiro, saw Battisson shoot over.

We started the second half well but the game developed into a tousy affair with a spate of bookings. I suspected that the referee had left his cards in the changing room first half, as he allowed a few robust challenges to go unheeded.

Tefera was booked for pushing a defender after being kicked from behind and then Monteiro flew into a tackle that merited the yellow that he received. 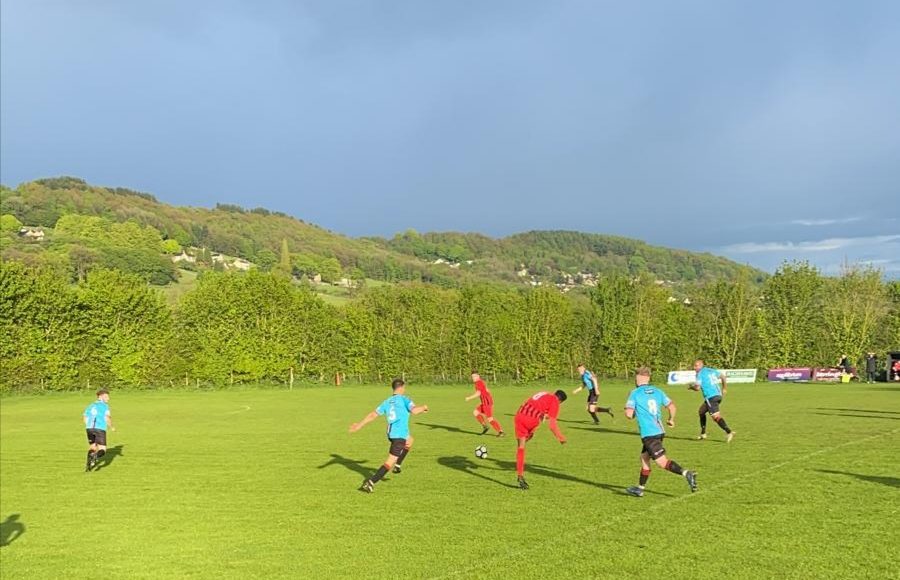 Worse was to follow for the Rowsley centre half when he got a yellow to match the one he had just got previously so he had to go.

On the positive side, Eccleshall had a free kick saved and just after the hour, Rowsley had a shot hit the underside of the Mickleover bar, before Battisson tested the keeper, after nice build up between Morrison and Tefera

In the last period of the game the Rowsley keeper made three very good saves from Tefera twice and Monteiro.

However, there were other opportunities squandered which would have made the game safe, when we either were slow in getting a shot away or took the wrong option.

One thing we knew was that Rowsley would keep playing and were very unlucky on three occasions.

In the 73rd minute Morrison used his experience to be in the right place and cleared off the line and luckily for us a Rowsley player snatched at a shot from six yards and squirted the ball past the post.

In the final minutes Ayetine had a shot well saved, but in time added on, Rowsley were handed the chance of an equaliser, but put the shot wide with a open goal, before Monteiro lost out in a final one on one with the Rowsley keeper.

A good first half followed by a dip in the second with excellent performances coming from Ferdinand and Fuertado, with Battisson and Milner in midfield and Monteiro and Tefera taking their goals well.

There was also a display of ball retention and simplicity that would be hard to match from Morrison, added to his goal-line clearance, making make him motm. (I won’t mention the ‘swinger’ of an attempted shot in the first half though)

We now look forward to a final with Retford at Sheffield on Saturday, at the end of a strange season and thank Rowsley for their hospitality and wish them well for the future.