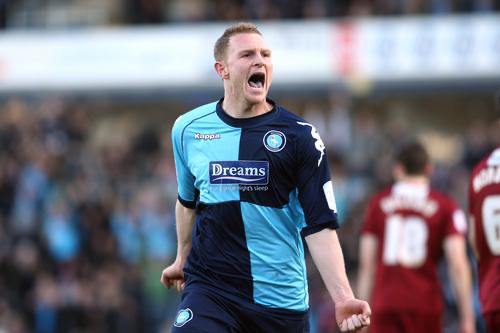 Stuart Beavon is another current Mickleover player due to join the NHS Allstars Charity match action. He became the third generation of his family to play professional football, following in the steps of his Father Stuart and Grandfather Cyril.

But it all started for Stuart junior at Hellenic League Ardley United, before swiftly moving on to Combined Counties side Wallingford. He scored 13 goals in 36 games between those clubs, before being snapped up by Didcot Town.

For 2008/09 he had his first spell in the Football League with League 2 Wycombe Wanders. He scored on his debut and his initial loan became permanent.

He gained promotion again with the Brewers to League 1 but part way into his third season he left in January 2017 with 15 goals and 102 games under his belt, destined for Coventry City.

Early into the 2019/20 season he joined Nuneaton, but it was when he began his current connection at Mickleover that he regained his scoring touch.