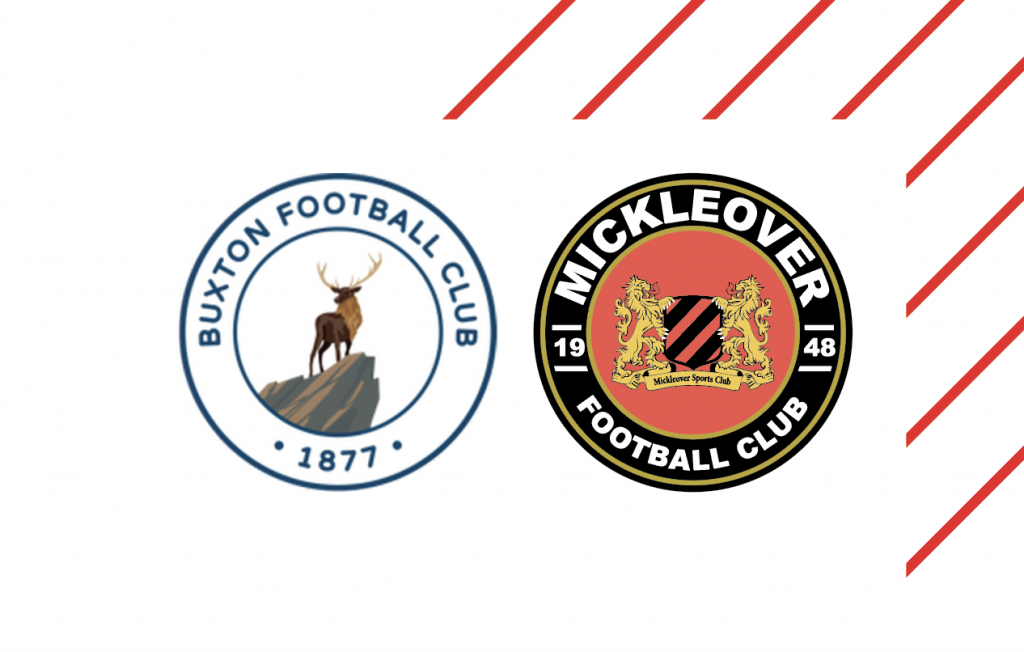 Mickleover will be looking for their fourth successive league win when they visit Derbyshire rivals Buxton on Tuesday evening.

Buxton have had a strong start to the season too and currently lie third in the table, one point ahead of Mickleover.

They have beaten Radcliffe and Scarborough at home so far and Stalybridge away, plus have drawn at home to Whitby and suffered one defeat so far, 2-1 away to Nantwich.

Strikers James Walshaw and Diego Di Girolamo have both been in prolific form, including FA Cup ties, Walshaw had six goals and De Girolamo seven.

Manager Gary Hayward and assistant Mark Ward have a fairly strong squad. Their goalkeepers are Mark Shenton and Tommy Taylor.

Shenton was signed last year from Chester FC. After a spell of reserves football at FC United of Manchester, he made his non-league name at Ramsbottom United, becoming the club’s leading appearance maker with 279 matches in a five-year stint from 2011. He’s also played for Ashton Utd in 2016, Stalybridge Celtic, and Trafford, moving to Chester in the summer of 2018, making 39 appearances in the truncated 2019/20 season and was voted ‘Players’ Player of the Season’.

Taylor was a junior at Leeds United and Sheffield Wednesday before moving to Garforth Town in 2011. He had stints at AFC Halifax and Brighouse, winning the EvoStik Division One North Young Player of the Year 2014/2015, before signing for Scarborough in 2017. He earned himself a trial period at Rotherham in 2019 and came to Buxton this July.

Left-back Stephen Brogan was another summer signing from Spennymoor Town. He made over 60 first-team appearances for Rotherham Utd, being linked with Premier League sides, before a horrific injury put him on the side-lines for 14 months. After a loan spell at Stalybridge Celtic he went to Alfreton Town in 2011 and earned a call up to the England ‘C’ squad in 2012. Since then he has played for Stalybridge (twice), Guiseley, Forest Green, Southport, Gainsborough Trinity and North Ferriby United, before Spennymoor Town in 2018 after a short period at Boston United.

Centre-back or right-back suits Connor O’Grady, he signed for Buxton in September last year. An ex Sheffield Wednesday youth player, he signed a pro extension in 2018, before joining Buxton. He was named captain for the first time against Witton Albion in late October 2019, where he turned in a man-of-the-match performance.

Matt Curley singed in February in a ‘swap’ deal with Hednesford Town and made an immediate impact with a goal on debut against Gainsborough Trinity. Primarily as a right-back, he is a versatile player and has played in various positions for Romulus and Sutton Coldfield, before joining Tamworth in 2017 and then Hednesford Town.

Another summer signing Shane Killock was a Huddersfield Town youth player, but made his debut in non-league for Ossett Albion at a very young age before returning to Huddersfield. He made a couple of first team appearances for the Terriers, then went on loan to Hyde United, Harrogate Town and Oxford United before moving permanently to Oxford in 2009. Another loan at AFC Telford United, led to a move and three-year stint there becoming captain and seeing the club win promotion to the Conference National via the play-offs. He moved to Harrogate Town in 2012 for three seasons, then Hyde United, Guiseley, Bradford Park Avenue and Alfreton last year.

A powerful defender signed from Barrow this summer, Josh Granite started his career at Woodley Sports and played for Sheffield and Hallam Universities before signing for Mossley. He then joined Trafford, before moving on to Ashton United I and then Barrow, where he was made he was club captain as they regained their league status in 2020 as winners of the Conference National League.

Matthew Kilgallon is a vastly experienced centre-back with over 300 Premiership and Football League appearances. He was signed from Indian side Hyderabad in August, but played junior football at York City before signing for Leeds United aged 12, before making 80 first team league appearances at Elland Road A near 2-million-pound transfer took him to Sheffield United in 2007 then joined Sunderland in January 2010, where he was loaned to Middlesbrough and Doncaster Rovers before signing for Blackburn Rovers in 2013 and Bradford City in 2016. He moved to Hamilton Academicals in the summer of 2018 and Hyderabad in 2019. He also played for England from Under 18s to Under 21s.

James Hurst started at West Bromwich Albion, before moving to Portsmouth on a scholarship in 2008. After a loan in Iceland at iBV he went back to West Brom in 2010, making his first team debut in a League Cup quarter-final at Ipswich Town. He had loans at Blackpool, Shrewsbury (twice), Chesterfield and Birmingham City before returning to Valur in Iceland in May 2013. After a summer with Crawley Town he returned to Iceland again, followed by a loan at Northampton Town. The he played for Hednesford Town, Torquay United, AFC Telford, Guiseley, Dover, Wrexham, Nuneaton Borough, Relling United and, Sutton Coldfield Town with a return to Hednesford Town before signing for the Buxton this summer. He played for England at Under 16s, Under 17s and Under 18s.

Former Wales under 21 international Chris Dawson was Leeds United Academy product, making a number of First team appearances, before joining Rotherham United in 2016. He went on loan to Viking FK in Norway, but following serious injury he signed for Scarborough, helping them win promotion to the Northern Premier League before spending the 2018/19 season at Bradford Park Avenue. He was then loaned to Grantham Town, before returning to Scarborough and was one of three players to make the move from ‘Borough to Buxton in July 2020.

Young midfielder signed September last year, Warren Clarke was a Sheffield Wednesday youth product, signing pro with the Owls in 2017, where he stayed for 2 seasons.

Tom Elliot is another midfielder singed from Hednesford Town in early December 2019. He started at Worksop Town before signing for Nuneaton Town in 2016, moving to Darlington where he made over 40 appearances for ‘The Quakers’ before signing for Hednesford in the summer of 2019. He was the first signing made by Gary Hayward when he joined the Bucks as manager.

A vastly experienced midfielder, Sam Wedgbury was a youngster at Worcester City before a scout took him to Sheffield United in 2006. He had two loan spells, first at Mansfield Town and then in Hungary with Ferencvaros. From Budapest his next stop was Macclesfield Town and after 100 appearances, including earning an England ‘C’ cap, he moved to Stevenage in 2013 and then onto Forest Green Rovers making 76 league appearances and helping the club win promotion to the Football League. He had a season at Wrexham, before joining Chesterfield in 2018 from where the Bucks signed him this summer.

Reece Styche has had an impressive goalscoring record since he started his career at Hednesford in 2006. After a loan period at Bromsgrove he joined Grantham Town, Coalville Town and Shepshed Dynamo. Forest Green Rovers spotted his goal scoring prowess at Chasetown and signed him in 2010. Despite injury he netted 35 times in 107 games for Forest Green before a loan move into the Football League with Wycombe Wanderers. He joined Kidderminster Harrier, then Tamworth, Macclesfield Town, Gateshead, Nuneaton Town, rejoined Tamworth gain, Darlington, followed by Alfreton, Hereford and Bromsgrove before Buxton signed him this summer. He has one England ‘C’ cap but is now a full international with Gibraltar with 7 caps, scoring a goal against Switzerland in a Euro-qualifier in November 2019.

There’s more continental flavour with Diego Girolamo. A former Italian Under 18s, Under 19s and Under 20s international and Sheffield United junior, he came to Buxton in July 2018. After several first team matches for the Blades, his career at Bramall Lane was hindered by an injury picked up on Under 18 International, which ruled him out for nine months in 2013. He was loaned to York City before returning to Sheffield where he scored his first goal for the Blades in a FA Cup tie against Preston North End. Two further loan at York and Northampton Town preceded a move to Bristol City in 2016. He was loaned again to Cheltenham in January 2017, scoring a hat-trick in the EFL Trophy against Leicester City Under 23’s. Then loaned to Chesterfield and Macclesfield Town, where his prolific goal scoring became the highlight of his game.

Another reliable goalscorer, James Walshaw was signed from Scarborough in July. He’s played at Ossett Town, Leek Town, Farsley Celtic, FC Wakefield and Guiseley, gaining England ‘C’ recognition and then a transfer to Darlington. After a spell at Halifax he returned to Guiseley in 2012, moving on to Altrincham, and Harrogate Town before returning to Farsley Celtic and finally Scarborough in November 2017.

Nigerian born Godwin Abadaki was a Rochdale junior who made a few first team appearances, before being loaned to Hyde United, Southport, Stalybridge Celtic and Workington. He also had a youth loan at Huddersfield Town and has played for Northwich Victoria (twice), Ashton United, Nantwich Town, Shaw Lane, and Mossley twice, from where the Bucks signed him this summer.