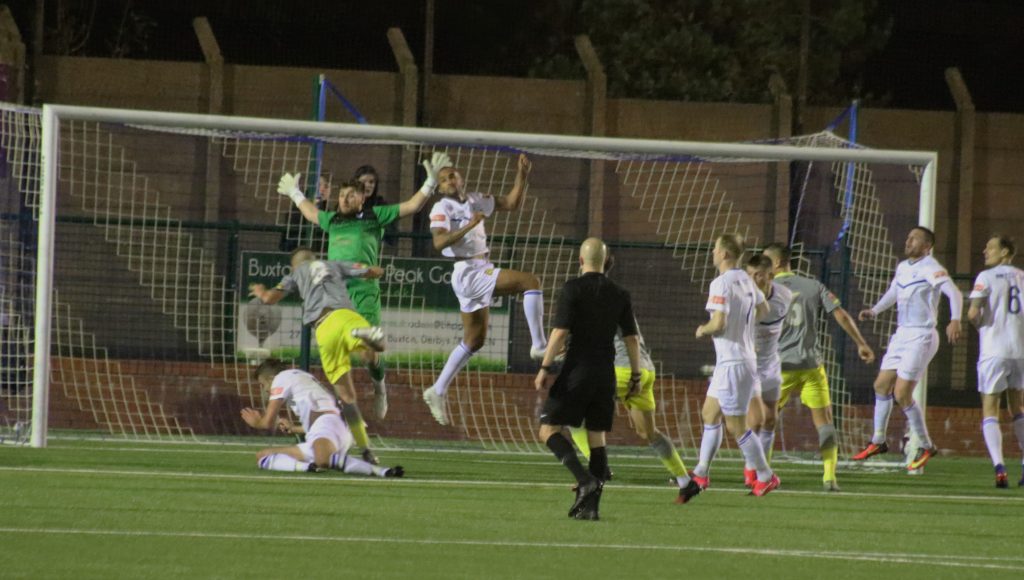 Confidence was high for Mickleover as they travelled to the north of county to face third placed Buxton, following three successive Northern Premier League victories.

With Andrew Wright nursing a niggling hamstring, he dropped to the bench and gave Josh Satchwell a start.

In the first five minutes from kick off Webb found himself through, but his first attempt was wide of the mark, before Buxton wing back Steve Brogan was flagged offside in their first attack of the night.

It was obvious from the start that Buxton were looking to catch the Sports defence on the break and when a Bennett free kick was intercepted, Tommy Elliott found his run comfortably intercepted. 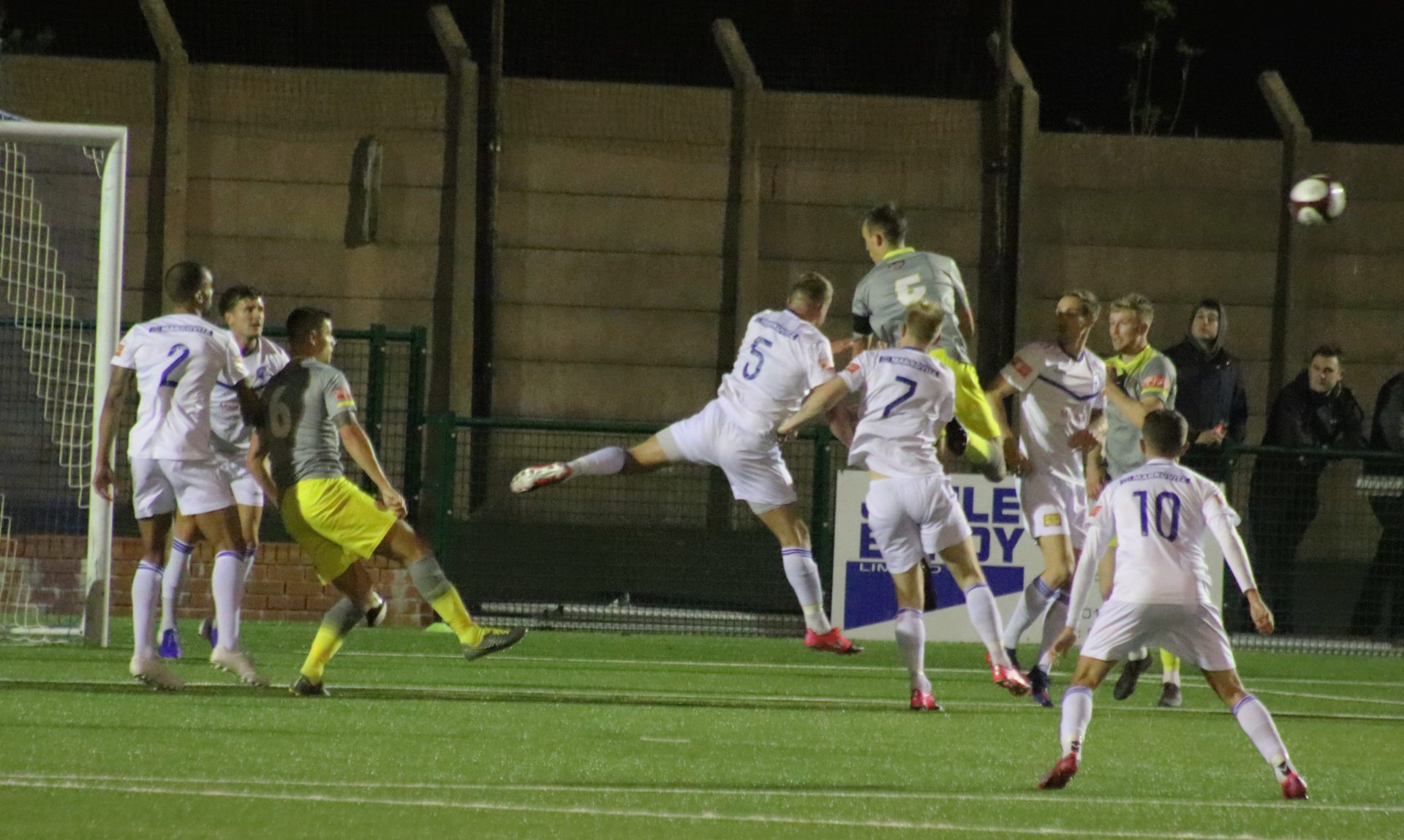 Beavon managed to squeeze a good ball through to Milner after eight minutes, but as he tried to collect, Buxton keeper Grant Shenton was there first.

There was a good chance for Buxton in the box shortly afterwards, but Brogan missed out, before Hawkins had to pull out all the stops to make a brilliant diving save from Clarke, following a poor clearance from the Mickleover defence.

Clarke wasted a good chance after being set up by Di Girolamo after 17 minutes and four minutes later a glancing header from King was easily taken by Hawkins.

Mickleover were then given a free kick which was placed into the box with perfection by Agustien, leaving to Watt to rise above the home defence and send a powerful header into the roof of the net for 1-0 after 22 minutes.

Agustien had a try for a second himself, with a powerful long range shot, before Buxton retaliated with a long shot well over the bar.

It was still end to end with both sides having a share of the attack. Beavon’s 31st minute shot was just wide of the post, but a minute later the referee gave the first of his dubious penalty decisions, after a combined Butler and Watt airborne challenge, was deemed to have fouled the Buxton striker.

Di Girolamo made no mistake from the spot kick and it was 1-1.

Buxton’s King was lucky to stay on the pitch after a horrendous tackle on Morris, left the Sports wing back in need of treatment. 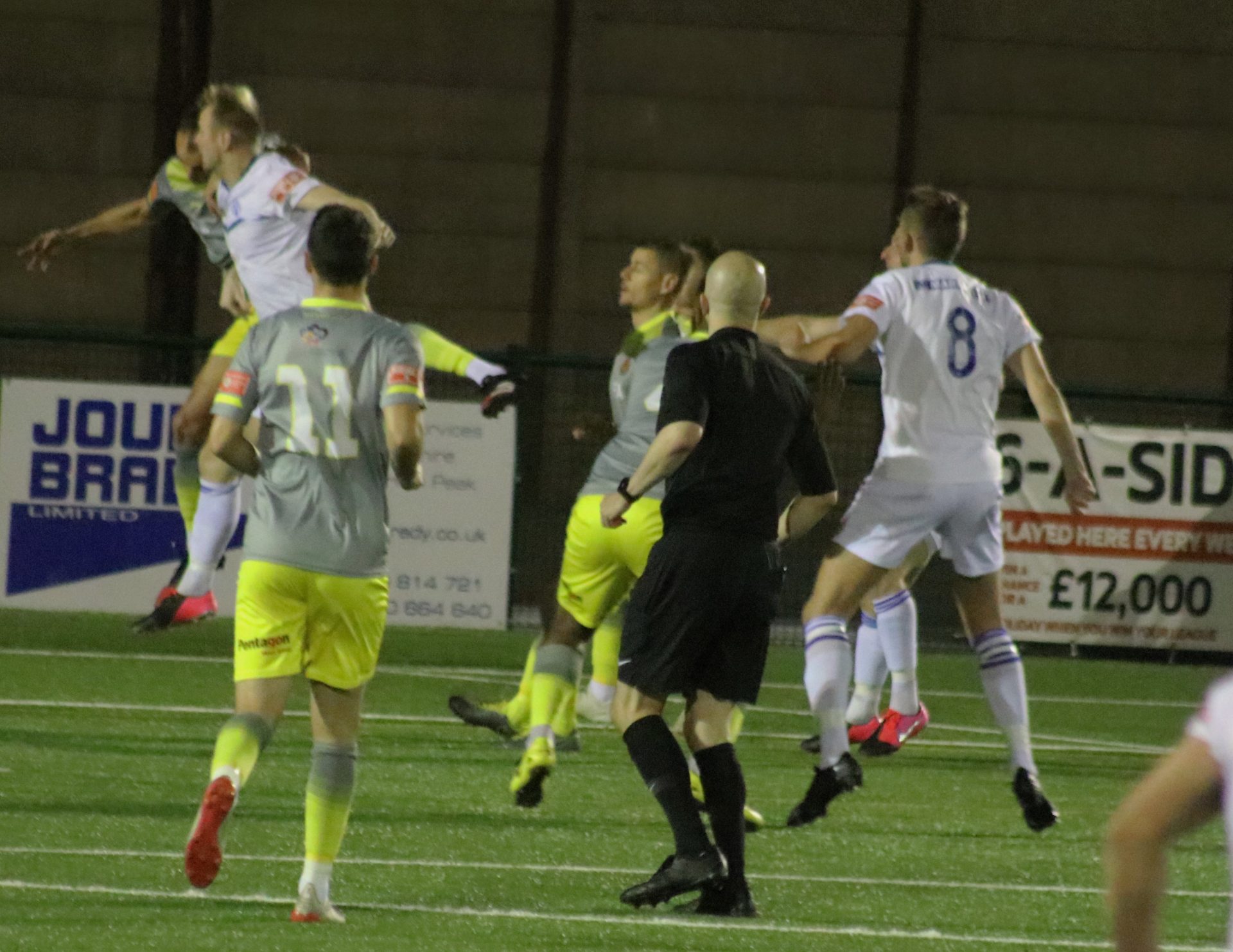 There was already a feeling that the referee was favouring the home side, missing niggling, sometimes cynical trips and taps and the pressure started to tell.

Sam Wedgbury put a shot just over the Mickleover bar from a long throw and Hawkins was at full stretch again from a 42nd minute Buxton free kick.

But Beavon made the most of another break to send Webb clear. The striker sent a precise pass into the box, where Bacon was on hand to make it 2-1 to Mickleover with a minute left to half time.

Unbelievably only a minute later Mr Riley from Manchester deemed a tap from Bennett to be another penalty, which Di Girolamo struck for 2-2.

Into the second half and Webb put an early ball across the face of the goal, but there was no one to connect.

Buxton could easily have gone a goal up on 50 mins when Butler was dispossessed on the edge of the box and a Buxton striker was left one on one with Hawkins, but he decided to pass and the chance was lost.

There were a number of long clearance’s sending Webb on runs, he had two shots within a couple of minutes, but both wide of the mark.

There was a Mickleover penalty appeal in the 56th minute, when Bacon’s shot was blocked by what appeared to be a defender’s arm. Unlike his other dubious awards, Mr Riley ignored this.

Webb continued to try his luck and sent a shot cannoning off the post on the hour, as the luckless striker still seeks his first goal of the season.

Continuing a slow and gradual build up Buxton tried again, but the end result was King firing high and wide, only for a quick switch of play to leave Webb with just the keeper to beat, but he failed to connect. 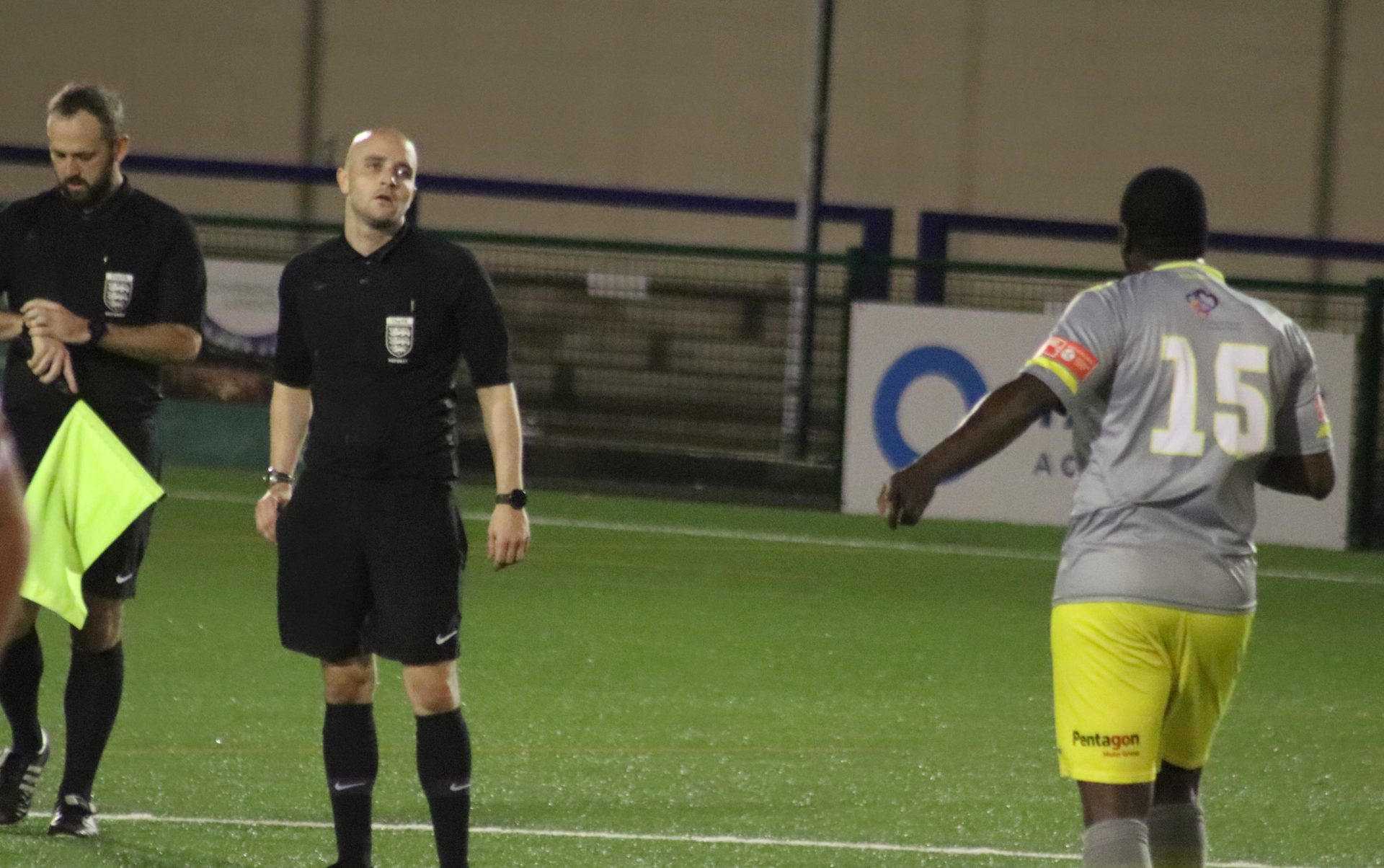 Beavon went close again after 64 minutes, but shortly afterwards was flattened by a wild challenge from Brogan. It could easily have been another red card, but like the first it was yellow.

Sensing the decisions continuing to go their way, Buxton piled the pressure on, with a header just wide from a free kick, followed by an incredible diving save from Hawkins following a shot from James Walshaw.

Watt then had to clear off the line in a goal mouth scramble, before both teams started to make late substitutions, with Chris Dawson on for Wedgbury for Buxton, and Mills replacing Agustien for Mickleover, after the Curacao international had taken a knock.

Three minutes of added time finally brought the game to a conclusion, with a very hard fought point to return home with. The high points were two terrific goals for Sports, some brilliant saves from Hawkins, solid defending from Butler and Watt and a classy show in midfield from Agustien.

The low points were obvious, two appalling penalty decisions, two possible red cards and a number of lesser incidents totally missed by the officials. In particular Buxton’s James Hurst spent much of the second half pulling Satchwell’s shirt, elbowing and pushing him.

We now look forward to our next home game on Saturday, when Grantham Town are the visitors.