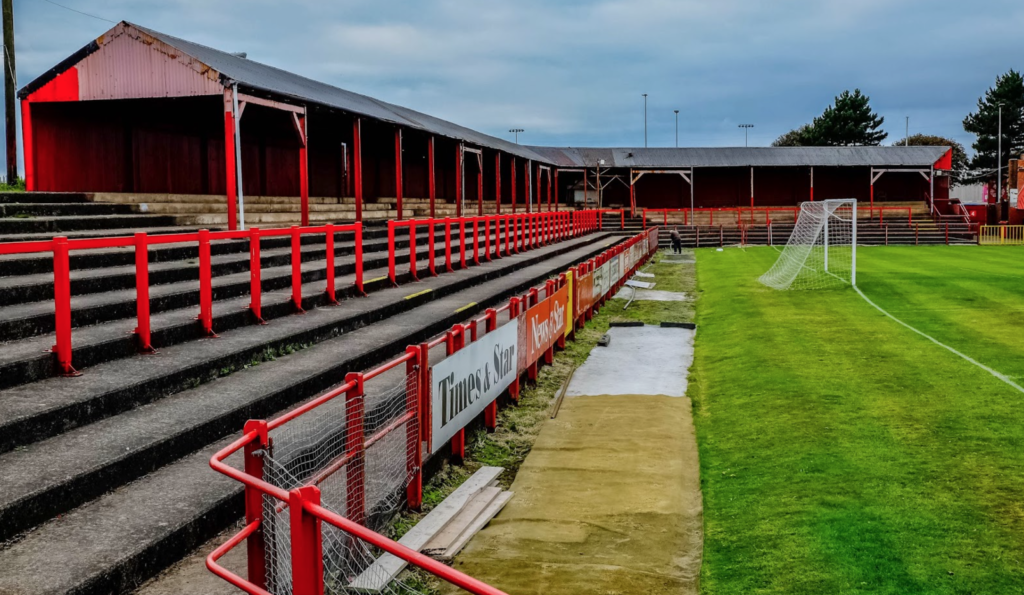 By Tony Shaw
Workington: Taylor, Simpson, Rowntree, May, Calvert, Earl, Symington (Wright 75), Wilson, Ryan, Allison (Douglas 82), Tinnion. Other subs Smith, Waterston, Fowler
Sports: Green, Gilhooly (Lansdown 57), Ptak, Mcgrath, Mills, Burgin, Dales, Scott, Belgrave, Dickinson (Thomas 70), Broadhead
Referee: Lindsey Robinson
Att 448
With Sports 1-0 in front at half time the game took a dramatic twist straight after kick off as the Referee took centre stage.
Sports had taken a 20th minute lead when John Mcgrath’s in-swinging free kick was headed into the corner of the net by Tom Burgin. They almost doubled the lead when a pass from Andy Dales saw youngster, Jake Dickinson run through and his low shot beat Taylor but came back off the post. From this the home team broke quickly to create their best chance as Scott Allinson shot past Jamie Green only for it to hit the post.
The officials were loudly booed off the pitch and also received a grilling in the changing room area from the Home team management and this must have unsettled them. In the 48th minute ,out of the blue, the referee awarded the first of three penalties in an eight minute spell. In a challenge by young full back Jordan Gilhooly the ball came out of the tackle and hit his arm on the edge of the area. David Symington fired in the spot kick. In the 50th minute Lewis Belgrave was clearly fouled out wide but the referee waived play and when the cross came Symington volleyed in superbly. 2 minutes later came a second penalty and for a third time Sports were justifiably upset as Tom Burgins tackle was deemed a foul by the linesman, though he clearly played the ball out for a corner. Jamie Green, making a strange debut in goal for Sports, produced a fine save to deny Symington a hat-trick.
Sports were now rocking and conceded again on 54 minutes when a poor headed clearance was spectacularly volleyed in from 20 yards by Rob Wilson. Even worse followed on 56 minutes when a third penalty was awarded – again clearly not a penalty. A long punt through the middle was headed back by Pablo Mills and the centre forward, who had continually jumped into him, did so again. With Sports expecting a foul on the whistle the referee warded a penalty!!
With the damage done Sports could not get back into the game though Jack Broadhead and Lewis Belgrave both went close.