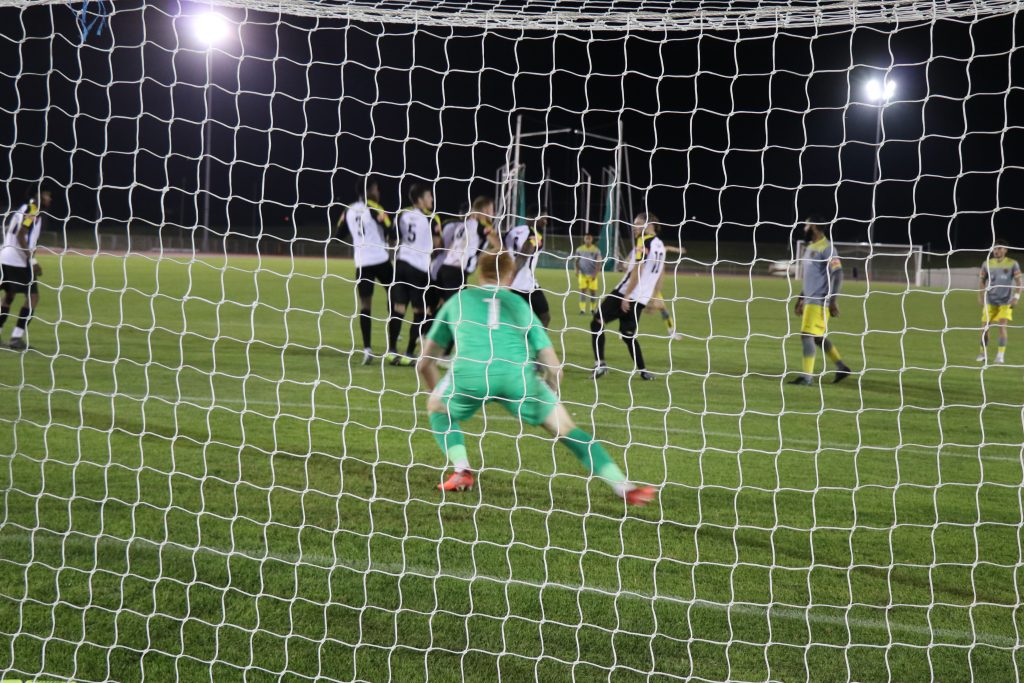 It was back to NPL duty for Mickleover with a visit to Grantham Town.

In the opening minutes Bennett was pushed from behind, no foul was given, but it was only four minutes in when Grantham went ahead with opportunistic opening goal.

Michael Williams managed to dispossess Butler wide to the right and had a player in the clear to his right. But rather than make the pass, he spotted Hawkins off his line and lobbed the ball over the Mickleover keepers head for 0-1.

Mickleover were quick to try and retaliate, with Dales finding Beavon who earned a corner, but it came to nought.

Bacon almost made it through the home defence with a long run after eight minutes, which was then turned into a Grantham break with Hawkins saving. 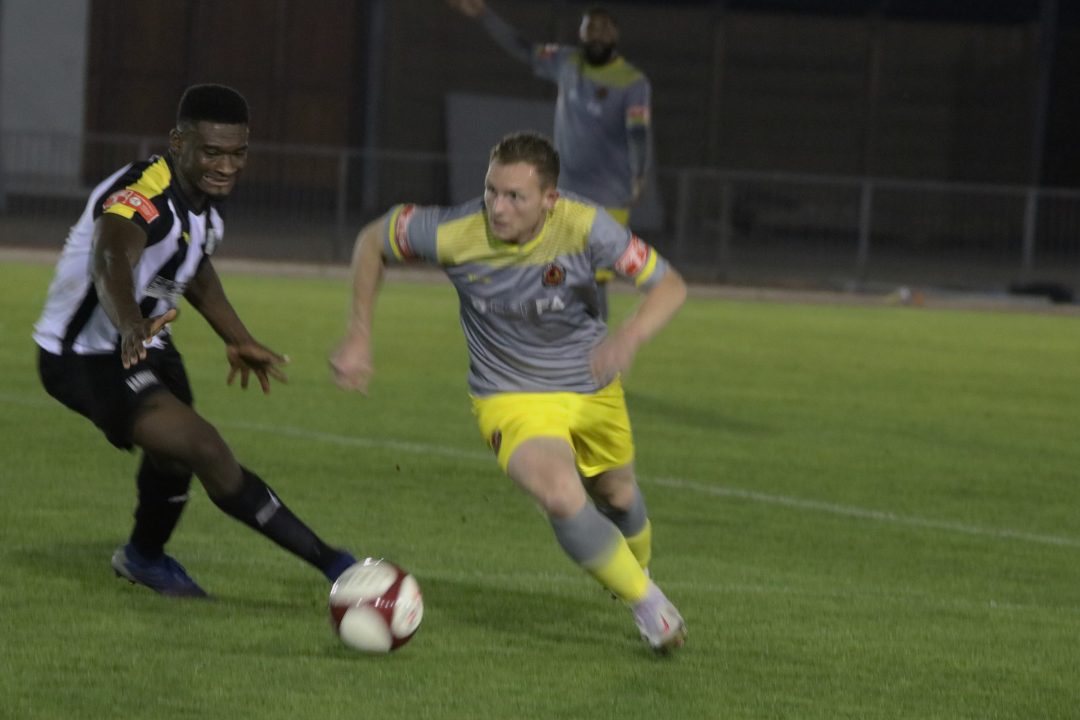 Bateman was starting to play the ball out nicely from defence, with some creativity from Lee and Agustien trying to feed the strikefore.

Mickleover had two good tries on goal consecutively, as Satchwell had his attempt blocked, similarly Dales too after a pass from Beavon.

A minute later Dales crossed to find Bacon in the middle, who was fouled by Finley Shrimpton. No free kick was given, but they did win another corner.

While Mickleover’s build up was precise and gradual, Grantham were more on the break, but when Nathan Modest had a chance for the hosts after 17 minutes, he fired his shot straight at Hawkins.

Bennett was finding the overlap route he often favours blocked on the right, but Morris had more freedom down the left and put in a nice 20th minute cross, just out of reach of Bacon.

Lee’s attempt to start a run was thwarted by a heavily mistimed tackle, which did earn a free kick, but the hosts again had it covered.

Shrimpton was then booked for a late tackle on Agustien, before another gradual build up started by Lee, was blocked and became yet another Grantham break. 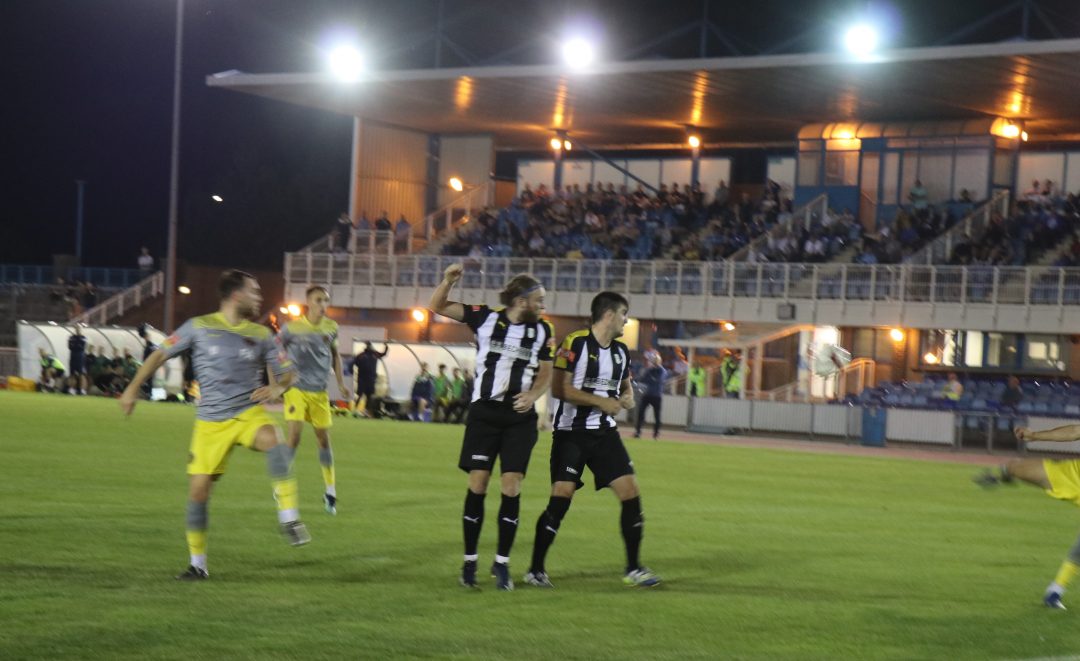 Dales then crossed from a corner after 28 minutes and found Butler, who headed just wide, but he then ran almost half of the field before being intercepted, with Morris tying to follow up being blocked too.

Into the last 15 minutes of the first half it was still fairly even, despite Grantham’s lead. 33 minutes and another Dales run was blocked, but two minutes later and there was success.

Dales put the ball out onto the wing for Morris, whose cross found Beavon in the middle and there was no mistake on this occasion, 1-1.

Three minutes later Beavon created his own space outside the box, turned and fired just over the bar. He had another half chance too before the half time whistle, when a Morris cross just missed connecting.

Grantham started the second half with an immediate attack too, but Williams shot was well over and from the goal kick Dales cross found Agustien, but his shot was blocked and earned another corner.

Agustien sized himself for a shot on goal from a free kick after Shrimpton fouled Dales again. The shot was easily saved by James Pollard in the Grantham goal though.

While Butler and Bateman were coping with the Grantham breaks, Agustien was yellow carded after 52 minutes after he appeared to have been obstructed. 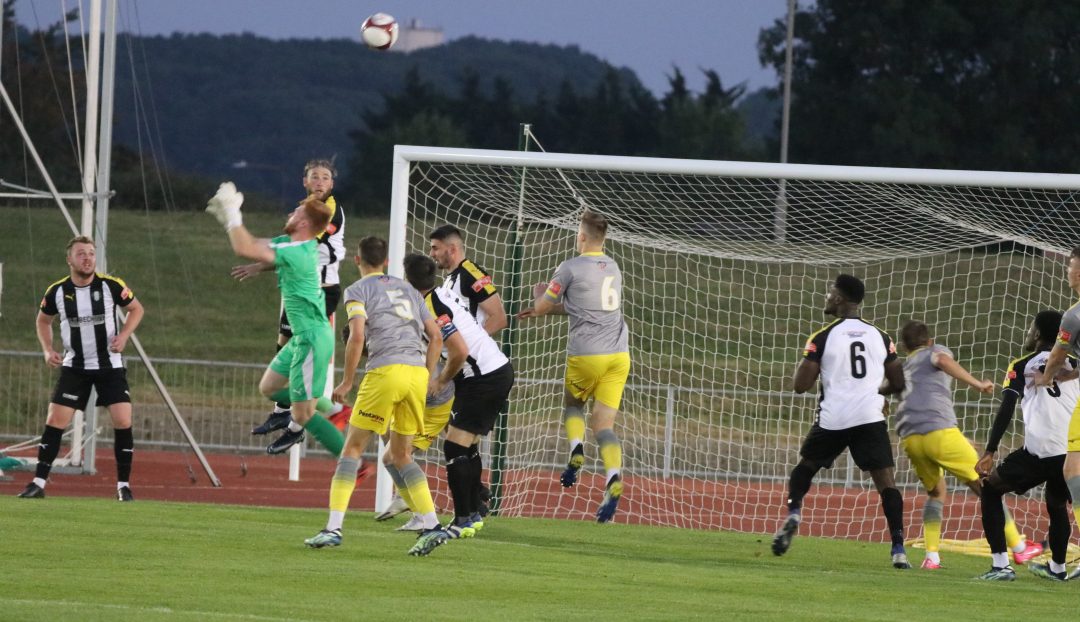 Dales and Bacon then combined positively, before Dales attempt was just wide of the post. Beavon then spotted Pollard slightly off his line and tried his luck too.

The Mickleover strike force were starting to look more threatening and after 56 minutes, Satchwell, Beavon and Bacon combined to give Dales an opening, but again his path was blocked.

Grantham broke after the Mickleover charge was blocked, but Shrimpton’s attempt on goal managed to clear the boundary fence.

Probably the best chance of the second half came just before the hour, when Beavon’s cross met with Dales, whose shot was tipped over by Pollard.

Gowing then came on for Satchwell and Hawkins was called into action again, when a scramble in the Sports area ended when he safely gathered the ball.

There were various heads trying to connect from a telling ball from Dales into the area after 69 minutes and then Grantham sub Many Kianga earned a free kick and a yellow card for Bacon, after a theatrical conclusion to the strikers tackle.

Gowing had a shot over from a Lee pass after 79 minutes and then Butler went in the book too.

Mickleover went for a final push, but still wary of a Grantham break. Beavon shot wide after collecting from a short corner and with two minutes on the clock, Bacon was fouled right on the edge of the Grantham box.

Bacon had a final attempt almost on time, but was blocked and a final Grantham effort went across the face of the goal, but wasn’t collected.

So it was a first away point earned in a tough match, with Grantham managing to stifle some of the Mickleover style, while relying on positive and often dangerous breaks themselves.