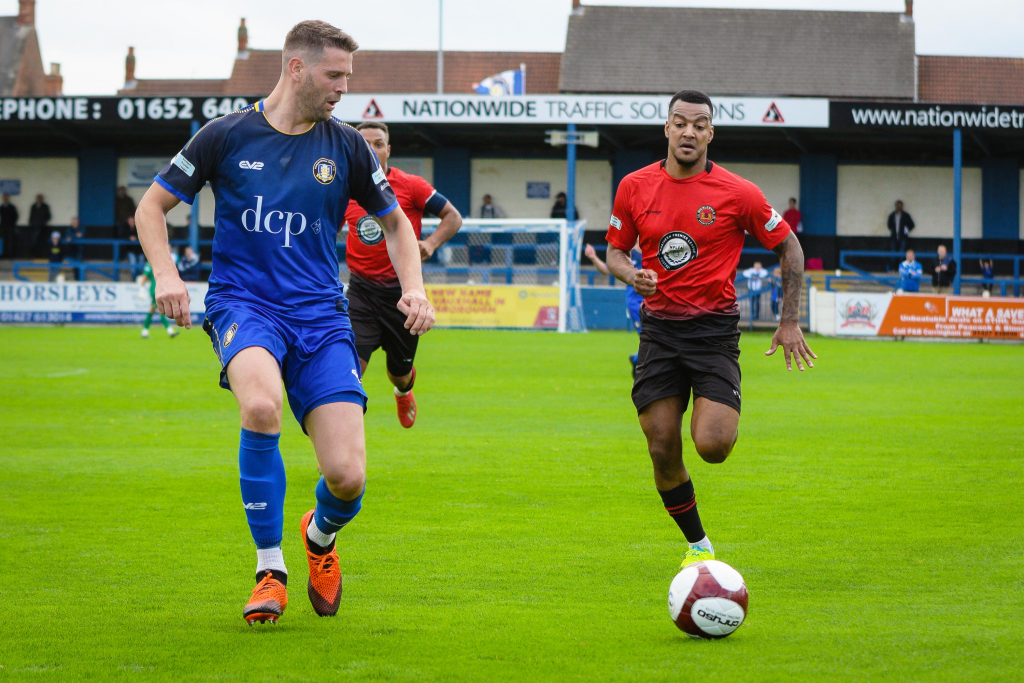 Mickleover Sports shared the points with Gainsborough Trinity at The Northolme on Saturday as they were held to a 2-2 draw.

Lee Hughes scored his second goal in as many games for Sports, in addition to Max Watters scoring on his debut against his former club.

Gainsborough started the livelier team due to the home fans roaring them on. They controlled the ball for the majority of the opening ten minutes and were the first of the two teams to create a chance.

A free kick on the far side was asking for a touch towards goal, but the pace of the ball ensured that it fizzed past everyone.

Sports retaliated quickly though when Lee Hughes hit the side netting from a very tight angle after he sprung on to a loose ball.

Mickleover would soon take the lead as they started to gain a bit of momentum. It all came after Stuart Beavon’s low cross from the right hand side was flicked on towards the far corner by Max Watters. The ball was tipped away but it landed at the feet of Lee Hughes who then smashed the ball into the roof of the net from only a few yards out.

Sports nearly latched on to another loose ball which could have seen the away side through on goal with only the keeper to beat but luckily for Gainsborough they managed to recover and dust off any chance of going two goals behind.

There were no real chances for the next fifteen minutes but the host managed to equalise on the 36th minute after Ashley Worsfold’s header from a few yards out finds the back of the net.

The remainder of the half was relatively quiet with neither team threatening the other.

The hosts nearly took the lead after just one minute of the half time whistle when Ross Hannah’s shot from outside the box went just wide of the bottom left hand corner.

Despite nearly going behind Sports retook the lead a few minutes later when Max Watters thumped the ball into the bottom right hand corner from outside the box. Watters, who had been vital in the build up to Sports’ first goal found himself scoring on his debut against his former club.

Just like the first half there were large spells where both teams couldn’t create any chances and it took until around the 60th minute for either team to threaten the other.

Nathan Broome saved Ashley Worsfold’s shot from outside the box to keep Mickleover’s lead still intact and then Stuart Beavon nearly scored from a few yards out but George Willis managed to make himself big and keep his side in the game.

Sports and Gainsborough were both leaving it late and the hosts nearly found themselves dead and buried with five minutes to go when Nathan Modest found himself through on goal with just the keeper to beat.

Modest who had lots of time to think about which corner to choose, fired the ball towards the bottom right hand corner but George Willis firmly palmed the ball away for a corner.

The dying few minutes were tense for both teams and Gainsborough should have finished the game with ten men after Ross Hannah who had been a threat all game elbowed Ben Turner in the face.

Sports just couldn’t hold onto their lead as the pressure from Gainsborough appeared to be too much for them to handle. Simon Russell scored for the hosts after he fired the ball into the bottom left hand corner from just inside the box.

Mickleover had little to no time to create a chance to win the game and would have left feeling that they deserved more.