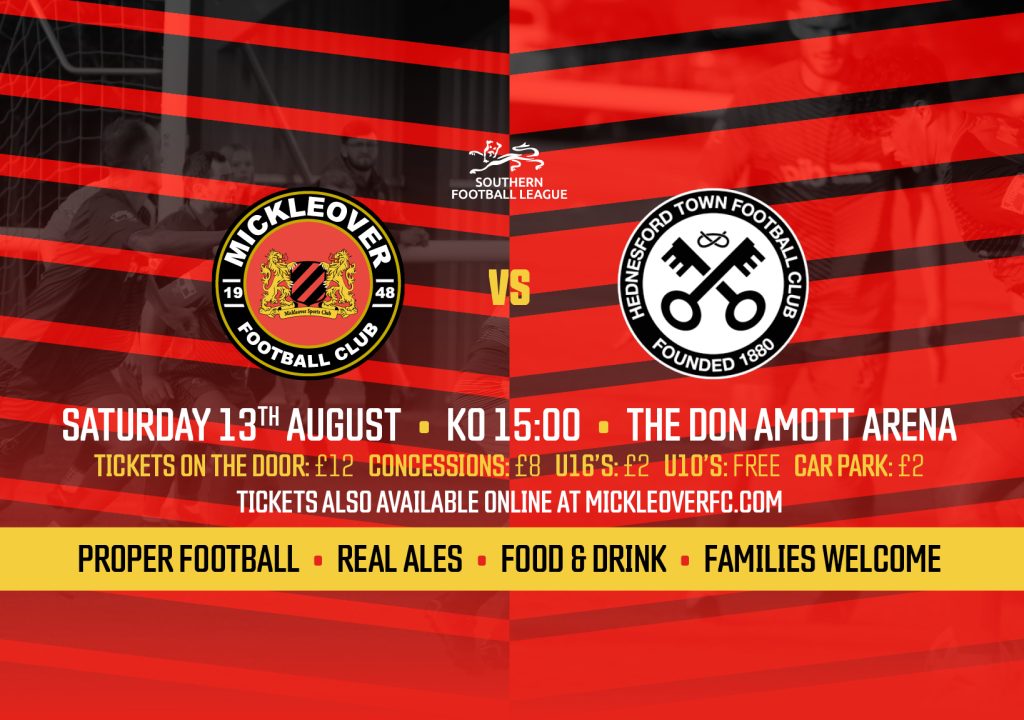 This Saturday at the Don Amott Arena we are hosting our first Southern Premier League game of the season, with Hednesford Town the visitors.

While Mickleover were unlucky not to come way with all three points at Kings Langley last week, our visitors went down 0-1 to Redditch after a second half free kick from Ryan Nesbit broke the deadlock.

Keenen Meakin-Richards side included four debutants in the squad. Keeper Lewis Gwilliams came from Belper Town in May, having previously played for Alvechurch, Rugby, Worcester and Sutton Coldfield.

Winger Joe Cuff is a recent arrival from Stafford Rangers after four years service. He was previously at Market Drayton.

Luke Rowe is a play anywhere midfielder signed from Redditch. He started at Wolves Academy and also had a spell with Coventry City.

Finally defensive midfielder Sam Wilding only arrived at the beginning of this month. A junior at both West Bromwich Albion and Sunderland, he was loaned to Leamington too before his release from Sunderland at the end of last season.

Former England Under 21 player and Chelsea Junior Leroy Lita is probably Hednesford’s best known player. After leaving the Blues he had three years at Bristol City, scoring 38 goals in 100 games. Four years at Reading saw another 100 games and 32 goals, plus loan spells at Norwich and Charlton, was followed by a move to Middlesbrough.

He played for Swansea City in the Premiership and after loans at Birmingham, Sheffield Wednesday and Brighton, he then continued his travels via Barnsley, Notts County, AO Chania in Crete, Yeovil, Sisaket in the Thai Premier League and finally non-league in the UK at Margate, Salisbury, Chelmsford,, before joining our visitors in March from Nuneaton, scoring a hattrick on his debut!

Lewis Hayden came from Walsall Wood and can play anywhere in defence or central midfield.  He was signed in February and has played for Coventry Utd, Solihull Moors and Rugby Town too.

Cameron Ebbutt was another February signing too from Bromsgrove. A striker, he started out at Bristol Rovers and was loaned to Dorchester, Evesham and Yate, before joining Hereford on his release in 2019. He also had a spell with Gloucester City before joining Bromsgrove.

Defender Carter Lycett came through our visitors own youth scheme and has become a first team regular over the last couple of season. He is also an England Schools International.

Harvey Portman is another young defender, preferably centre back, he came from Stourbridge in February, having came through the youth scheme.

Skipper Lewis Ison was a youth player at Bristol Rovers, after they spotted his talent at Coventry Utd. But a UCL injury hampered his progress when he was on the verge of the first team. He then returned to Coventry from where our visitors signed him in January 2021.

Young striker Riley O’Sullivan was an October 2021 signing from Coventry Utd, having previously been a Mansfield Town junior.

Former Wolves Academy player Todd Parker is a midfielder who arrived in May ’21 after a year out following his Molineux release.

Andre Landell came from Bromsgrove in June last year. An experienced and well-travelled striker, he started at Wolves too, before going to US College football after spells at Bath City and Rushall.

He returned to the UK with Rushall in 2019 and has played for Alvechurch and Stourbridge too.

Yet another former Wolves junior is winger Kyle Bennett. His league career has seen him make over 400 appearances with 30+ goals, for clubs such as Bristol Rovers, Grimsby, Swindon, Portsmouth and Doncaster.

He came to Hednesford in January and is also an England Under 18 international.

Veteran centre back Martin Riley started at Wolves too, and was signed from Tamworth last December. Among his long list of clubs are Mansfield, Wrexham, Tranmere, Alfreton and Hereford.

Rhys Williams is currently second choice keeper having come through the youth scheme.

Taylor Carter-Byrne is a centre back recently brought in from Coleshill Town, but he wasn’t in last weekends squad.

Mickleover will hopefully have a full squad available too for gaffer John McGrath to select from, dependant on Callum Chettle’s troublesome hamstring.

Kick is 3pm at the Don Amott Arena, BE THERE!!