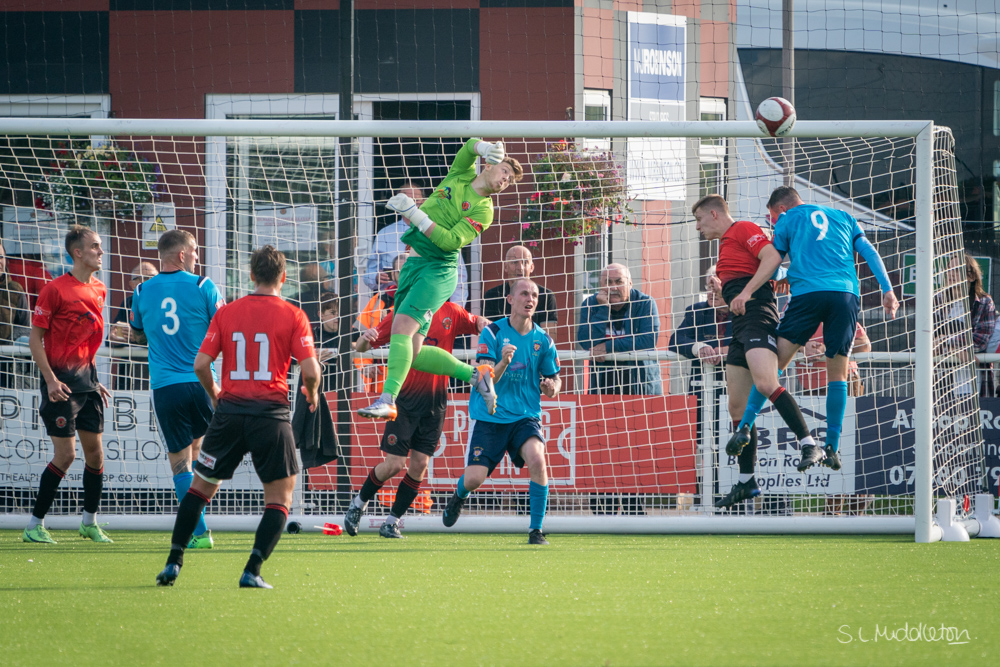 Morpeth certainly lived up to their name of the Highwaymen, as they inflicted a crushing defeat on Mickleover last Saturday.

The game had only been under way for five minutes when Morpeth scored their first goal, with Gary Johnson collecting at the edge of the box and firing it home 0-1.

Although Mickleover tried to fight back, Lewin was booked for a foul on the edge of the Mickleover box, from where the free kick hit the post.

19 minutes and it was 0-2 as Johnson scored again, with a header into the top corner.

Bacon though he had pulled one back for Sports, but although he put it in the back of the net, play was pulled back with Bacon adjudged to have pushed a defender.

The situation was compounded still further when 27 minutes in Ben Sayer had a shot saved by Hawkins, but he followed up with a rebound header, 0-3.

Warren came close too when his 33rd minute free kick was only collected by the visitors keeper at the second attempt.

It could have been Johnson’s hattrick three minutes later, when he was  given a  free header  only just wide, but with Holmes then booked for a foul on a Morpeth striker, it remained 0-3 in Morpeth’s favour half time.

As Mickleover tried to bring some credibility to the scoreline, Wright came on for Mills, with Agustien and Barker on for Warren and Bacon, but the hour was up and it continued to look bleak.

Agustien had only been on the field a few minutes when he reacted badly to being fouled and was in the refs book too.

Morpeth’s Ben Sayer was then in the book too after he caught the ball in a Mickleover counter attack.

Holmes went near with an 83 rd minute free kick in the 83rd minute, but was then sent off for second yellow card.

In the closing minutes Ramsey took a free kick for Morpeth, but it was well taken by Hawkins.

So it was another home defeat which now leaves then fourth from the bottom of the table and in dire need of points.