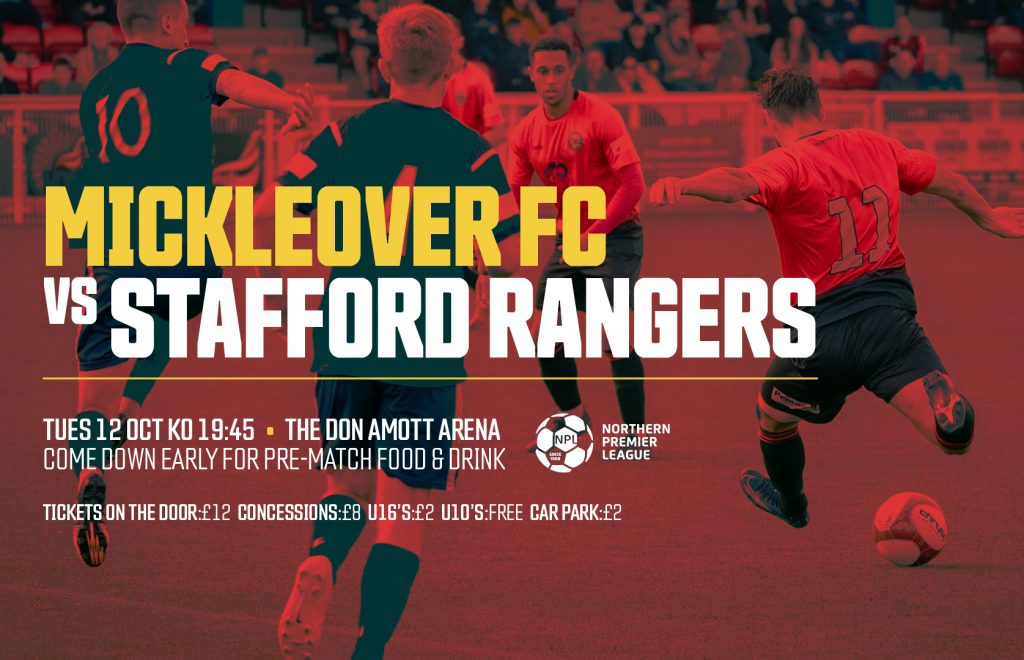 For the last two unfinished seasons, Stafford Rangers have spent most of their time fighting against relegation, but this year’s its all change.

They started with a 3-1 home win over Morpeth and have had mixed form with five wins and four draws from their 14 games, plus they were knocked out of the FA Cup by Rushall Olympic after a replay.

Last weekend they went down 0-1 at home against Scarborough, and currently are ninth in the NPL table.

First choice goalkeeper Luke Pilling started out as a Tranmere youth team player, making seven first appearances and spending a loan period at Ashton before joining Notts County in September 2020. He came to Stafford during pre-season and is capped by Wales at Under 20 and Under 21 levels.

A full back or centre back, Andrew Burns was a junior at Bolton Wanderers. After moving on to Bradford City, he came to Stafford this summer via Redbridge and Barrow.

Ben Woods is a winger or wing back, a recent signing from Spanish club Lorca. He’s a former Burnley youth player and has NPL experience with Stalybridge.

Skipper and midfielder Alex-Ray Harvey started off at Burnley too and had loans at Fleetwood and Barrow, before making a permanent move to Barrow. After spells at Guiseley and Hednesford, he joined Stafford in July 2019.

Centre back Ethan Stewart was only signed from Alfreton just over a week ago. He was at the Nottingham Forest Academy until July last year, during which time he was loaned to Billericay and Alfreton. On release he joined Nuneaton, from where he joined Alfreton again in July this year.

Centre back or midfield James O’Neil came from Welsh League Newtown in July. He started out at Telford and had three years at Chasetown in between spells at Newtown.

Joe Kenton is joint leading scorer for Stafford with five. The attacking midfielder or striker started out with Wolves and Shrewsbury, and was another Welsh League player from Newtown. He had previously played for Tividale and came to Stafford July last year.

Tom Tonks is the other joint highest scorer, a summer signing from Tamworth. Having started at Tipton, he has had numerous spells at Stourbridge and has also played for Telford, Solihull Moors, and Alvechurch.

Former Huddersfield junior Jake Charles came to the Terriers from Garforth Villa and made one first team appearance during his spell at Huddersfield. A loan at Guiseley preceded a move to Barnsley, followed by a loan at York City, before signing for Stalybridge.

His first spell at Stafford was in October 2018, scoring on his debut. But after 55 games and 18 goals he joined Farsley Celtic, before returning to Stafford in June this year.

He has represented Wales at Under 16, 17, 19 and 21 levels and is the Grandson of the legendary John Charles.

Alex Fletcher is a central midfielder with more Welsh connections. After his release from Shrewsbury Town, he joined Tividale, before signing for Newtown in June 2016. He had a short spell at Southport before coming to Stafford in October 2017, but left after three months to rejoin Newtown.

After a brief stay at Stourbridge he had a third spell at Newtown, before arriving at Stafford again in pre-season.

Striker Luca Navarro is another recent signing. The former Bolton junior had spells at Bamber Bridge and Hull City before coming to Stafford during the summer.

There are more Welsh connections with winger Theo Bailey-Jones. He started his career at Wrexham, with loans at Colwyn and Macclesfield, before a permanent move to Macclesfield. He moved on to play at Stalybridge and Altrincham, before coming to Stafford in July 2018. After two years he went to Hyde, before returning to Stafford last week.

Striker Joe Cuff is in his second spell at Stafford. Signed originally from Market Drayton for the 2018/19 season, he returned to Shropshire after one season, and has been back in the Stafford fold since pre-season.

Striker Max McCarthy is another brand new signing, on loan from Stoke City for a month initially.

Tolani Omotola is another striker recently signed from Hyde. He started out at Tranmere and made one first team appearance, before moving on to Witton and Burscough on loan. He then joined Altrincham and was loaned out to Ramsbottom and Loughborough Dynamo, before moves to Coalville, Buxton, Corby and Barwell.

After starting off at Solihull Moors, left back Josh Endall joined Coventry City for a couple of seasons. He was released and joined Stratford Town, moving to Redditch, Banbury and Alvechurch, before his move to Stafford in the summer.

Charlie Ten-Grotenhuis is another summer signing. The midfielder was a Bristol Rovers product, who was loaned to Gloucester City, before a permanent move to Hungerford. Further moves to Farnborough, Stratford, Paulton and Hednesford preceded his move to Stafford.

Midfielder Tre Pemberton only arrived at Stafford last week from CFC United. He played his junior football at Blackburn and Stoke City, before joining FC United. He has also had a loan spell at Longridge.

Jon Moran started out at Crewe, with a loan at Nantwich which was made permanent. Forest Green, Halesowen, Chester and Bradford PA were his next stops, before coming to Stafford in November 2019.

Kick off as usual is at 7.45pm, so come along and help Sports get some points on the board.