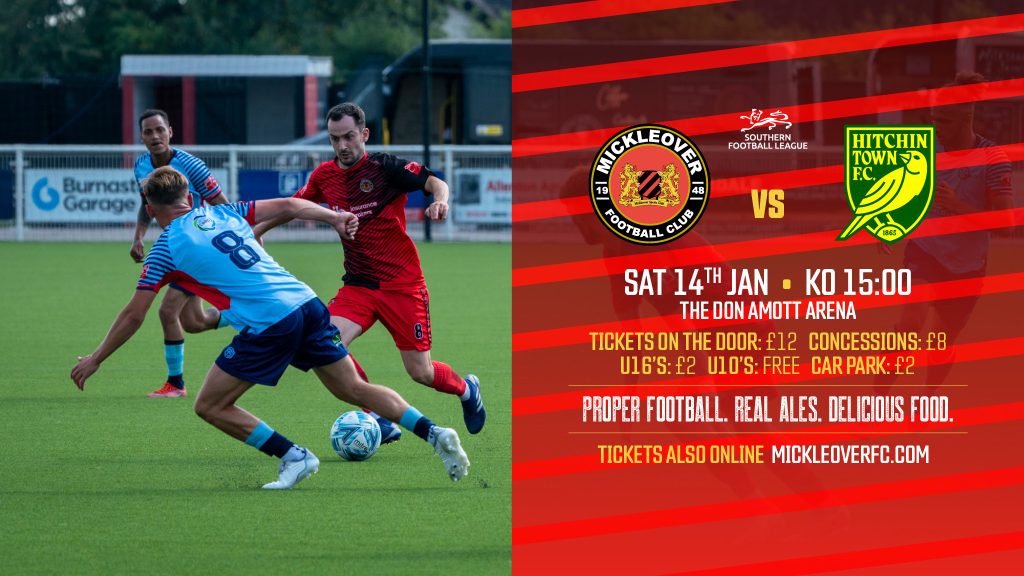 Saturday will be the first time Hitchin Town will have visited the Don Amott Arena, but it’s time to turn the tables on the Hertfordshire side as they have become a bit of a jinx side for us.

Having been knocked out of the FA Trophy by them a couple of seasons back, we went down 1-4 in November’s League visit, in probably Sports worst performance of the season.

With five points from the last five games, we have now slipped out of the play-off positions down to eighth place, with our visitors ninth, level on points, having played one game more.

Mason Warren will be available again after his suspension, but James Butler is due to start his. It remains to be seen if Andy Dales, Jake Scott and Mitch Rose are fit to play and if Elliott Reeves is available too.

Lets take a look at who we are up against. Their win last Saturday, broke a run of three defeats, all away from home.

Goalkeeper Charlie Horlock has been at Top Field for three years, since signing from Hastings Utd. He started his junior football at Wycombe Wanderers and Stevenage and was loaned to Hendon and Harrow, before coming to Hitchin on loan too in November 2014. He then made a permanent move to our visitors a year later, before moving to Eastbourne. He captained the side too in last Saturday’s victory against Bromsgrove.

Reserve keeper Tiernan Parker is a former Northern Ireland Under 15, 16 and 17 International. He started out at Luton Town and was a loanee at Hitchin in 2019 and 2020, before joining Haringey. He returned again last July from Colney Heath and deputised for Horlock in the pre-Christmas defeat at Rushall.

Full back Stan Georgiou is a home- grown talent who has been a regular starter since the second half of last season. He captained the clubs Youth Cup team and also had a loan spell at Letchworth Garden City Eagles, before securing his place as a regular first choice.

Kye Tearle is a defender or midfielder who came from the Pro Direct Academy in Baldock. He is in his third season with the first team squad.

Irish midfielder Stephen Gleeson was spotted by Wolves when he was playing junior football for Chery Orchard FC. He spent a few years on loan at Stockport County before a permanent move to Mk Dons. He then moved on to Birmingham City, Ipswich and Aberdeen, before coming back to England with Solihull Moors. He came to Hitchin in November 2020 after four months at Hemel.

He was capped by the Republic of Ireland at full, Under 17, 18, 19 and 21 levels and has played over 40 league games in the Championship, League One & Two and Scottish Premiership, scoring 27 goals. He is also the first team coach.

Lewis Barker arrived at the start of the 2019/20 season, after five years at Baldock Town and Dempsey Thomas is a young defender having recently broken into the first team squad.

Defender or midfielder Malaki Black arrived from MK Dons in July 2020, while fellow midfielder Bradley Bell came back for his second spell last season, from Barton Rovers. He had initially left to join Biggleswade in 2020 and has also played for Royston and Cambridge City, having started at MK Dons.

Striker Diogo Freitas-Gouveia originally came to Hitchin on loan from Colchester Utd in 2019/20. He was also loaned to Brightlingsea and Maldon & Tiptree, but then made his move to our visitors, making his move permanent following his release during the summer. He is a regular goal scorer. games.

Rio Da Silva is a midfielder who has been at Hitchin for three years, since arriving from Dunstable. He previously played in Luton Town’s Academy, followed by four years in Chelsea’s youth team.

Striker Ashley Hay is a former Luton Junior too. He moved from Baldock Town to Biggleswade at the start of this season and came to Hitchin last September.

Steve Cawley is a striker in his third spell at Top Field, having started out at Chesham. Spells at Bishop Stortford, Concord Rangers and Hemel followed, before he came to Hitchin on loan for eight months in September 2019. He then returned permanently in July 2020, before a two-month spell at Stotfold at the beginning of last season, preceded his current stay.

Jack Snelus came from Rushden & Diamonds last September. He is another ex Luton Junior and has also played for Hemel and St.Ives Town.

Toby Syme is s full back in his second spell with the club. He came from one Canaries team to another, after leaving Norwich City in 2017. He moved on to Kings Langley a year later, before spells at Leverstock, Tring Athletic and Harpenden, were followed by his return to Top Field last August.

Centre back Ciaren Jones is an ex Luton Town and Norwich Norwich City Junior too. He started this season at Brackley, having joined them from Gloucester City in July. He also played for South Shields and spent a week at Hitchin in 2020, before his move to Gloucester.

Josh Coldicott-Stevens is another player who’s been at the club for three years. He is a midfielder, who started at Boreham Wood, before arriving at Hitchin from Kings Langley in December 2019.

Midfielder Leon Chambers-Parillon spent most of career so far with Oxford Utd. He had loans at Biggleswade, Havant & Waterloovile, Gloucester City and Slough, joining Hitchin on his release in August last year.

Defender Alfie Warman was a new signing from Baldock Town last August too. He has also played for Welwyn, Codicote and Potton Utd.

Callum Kane is another summer arrival from Baldock. A full back, he is a product of the Pro-Direct Academy.

Delsin Ackom is another young defender, signed in 2021 after his release from MK Dons two years earlier. In between he played for Potton Utd, MK Gallacticos, Buckingham Athletic and Desborough, as well as having a spell in Spain with Almunecar.

Midfielder Daniel Idiakhoa was a Luton Town Junior, who joined Newport Pagnell on his release. He is a recent signing for Hitchin and now a regular starter.

Midfielder Finley Wilkinson was a summer signing from Histon, after coming through their Youth Scheme.

Striker Johnny Allotey signed pro-forms for our hosts towards the end of last season.

Kick off at the Don Amott Arena is 3pm, the bar will be open and before kick off you can also visit the Rams Heritage Trust, which will be on site from 11am.