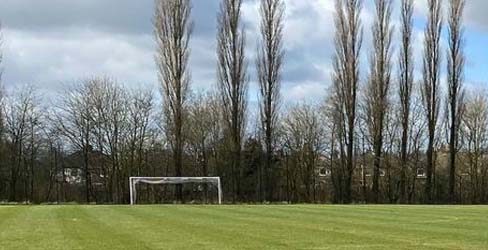 Mickleover reserves continue their spectacular form with a comfortable 5-1 away win against Ashland Rovers in the Central Midlands League Premier Division.

An impressive brace from both George Atwal and Fin Barker all but completed a dominant display by the Sports reserves with Freddie Murphy coming off the bench to join to duo on the scoresheet.

The match begun with Atwal looking to catch the Ashland goalkeeper off guard from the kick-off. His audacious attempt from the centre circle narrowly arched over the bar with the ‘keeper back peddling. A sign of things to come for the reserves number four who had his eye in for goal.

Only minutes later Atwal came close again. From deep on the right-hand side, he curled a dangerous left-footed freekick goalward. The goalkeeper once again had to react quickly and punched the ball out of the box.

Mickleover begun to bombard the home side with flurries of attacking opportunities. Jude Ayetine was next to have an attempt at the Ashland goal. Jacob Edge-Lucas received a brilliant floated ball down the line by Atwal. The fullback opened up space for himself and clipped a ball from the right onto the head of Ayetine. To the number ten’s misfortunes his headed attempt at goal spun narrowly wide of the far-left post.

Barker looked to open up the scoring for the away side but mis-hit a left footed effort and saw his shot sail over the goal. He had worked himself into a brilliant position in the centre of the penalty area after jinxing his way in from the right.

Ashland Rovers looked to respond to the plethora of Mickleover attacks with one of their own. A free kick from the left curled towards the far-right post but proved no problem for Fin Bowen who watched the attempt whip out for a goal kick.

Having tried his luck earlier on, Atwal opened the scoring on the 20-minute mark. He picked the ball up centrally outside the area, put his head down and drilled a low driven shot towards goal. His attempt arrowed into the bottom right corner and was out of reach for the diving goalkeeper.

Ten minutes later Mickleover doubled their lead through Barker. Devon Smith found himself on the right wing and delivered an in-swinging cross into the box. The goalkeeper reacted well and met the ball, however he fumbled it leaving it to fall to the feet of Barker who tapped in to earn his first of the match.

Mickleover finished the half with Barker getting his brace in an excellent move. Atwal played a perfectly weighted pass from the centre of the park, splitting through the defence and travelling into the path of Barker. With the ‘keeper looking to beat him to the ball Barker delicately chipped the ball up and over into an unmanned net.

The second half saw more of the Mickleover dominance with the away team controlling possession. Freddie Murphy came on for Smith in the 70th minute and two minutes later he made his mark on the game with a goal. Edge-Lucas drilled a low ball across the area towards the far post. With a couple of mis-hits the ball landed at Murphy’s feet who tapped in from close range to make it four.

Rovers were not out of the game just yet, winning a corner on the right-hand side they delivered an out-swinging ball targeted for the penalty spot. Their captain rose above the rest and delivered a towering header low into the ground to deny Bowen a clean sheet.

Mickleover Reserves finished their match with Atwal earning his brace, when the Ashland goalkeeper came out of his area to clear to ball. His clearance fell to the feet of Atwal on the halfway line and without hesitation he launched a strike. His effort sailed over a stranded goalkeeper and nestled into the open net rewarding  the reserve side with a 5-1 victory, continuing their magnificent league form.