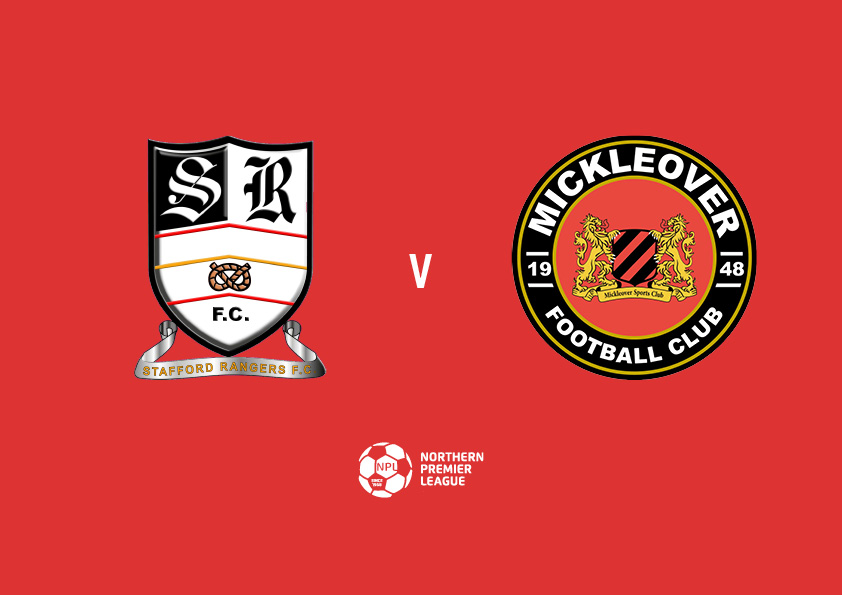 UPDATE: THIS MATCH HAS SINCE BEEN POSTPONED.

With last Saturday’s visit to Stalybridge a late victim to a waterlogged pitch, Mickleover will be looking forward getting back in action tomorrow night at Stafford Rangers, hoping to extend their unbeaten 2022. 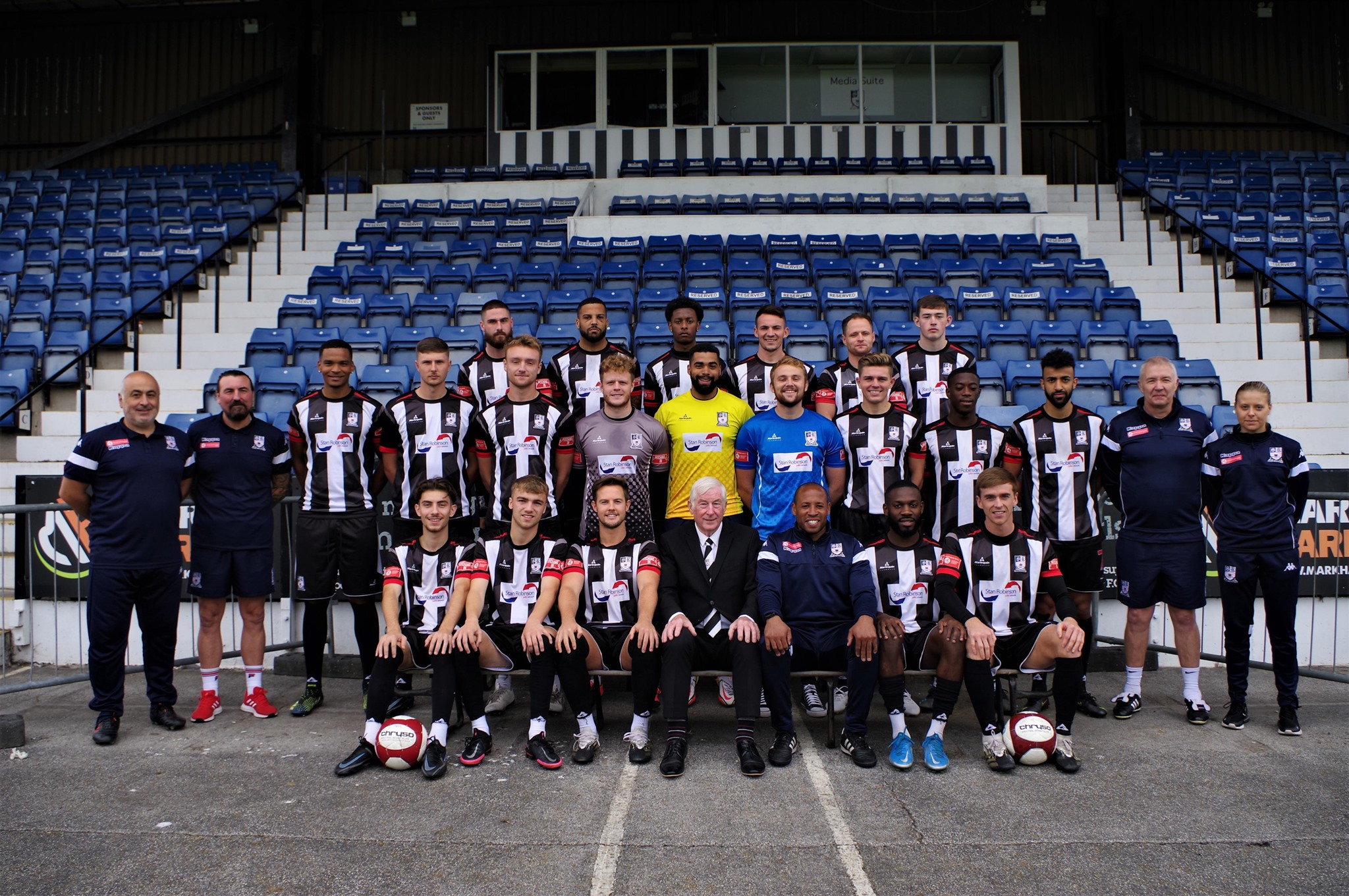 Over the last two seasons Stafford Rangers have been struggling near the bottom of the NPL, but with neither campaign completed, a resurgence of form and some new additions to Matt Hill’s squad has seen them mid table for most of this season.

Following last Saturdays 0-0 at home to Whitby Town, they are currently ninth in the NPL, unbeaten in the last eight games, but having drawn six of them.

Goalkeeper Luke Pilling is a Welsh International at Under, 19 and 21 levels came to the club back in August 2021 from Notts County, having previously spent five years at Tranmere Rovers, making seven first team appearances.

He also went on loan to Ashton during his spell on the Wirral.

Tyrell Belford is the second choice keeper, a former Coventry and Liverpool junior who joined Swindon Town in 2013.

After loan at Southport he moved on to Oxford City, Nuneaton, Hinckley and Swindon Supermarine, before  a six month career break in 2018.

He returned with a year at Romulus, before second spells at both Hinckley and Nuneaton. In July 2020 he moved to Stratford Town and a year later arrived at Stafford. He was also capped by England at Under 16 and 17 and Father Dale is the clubs assistant manager.

Right back Andrew Burns came to Stafford from Bala Town in June last year, having started out at Bolton Wanderers.

His next stop was Bradford City, but after only five months and a loan at Harrogate, he joined Dagenham & Redbridge, who loaned him out to Harlow, Bishops Stortford and Margate, before being released in August 2013.

He was at Barrow for two years and Tamworth for three, before his move to the Welsh League.

Young centre back Joe Dunne came from Rochdale on loan, where he made four senior appearances. He first arrived in December for one month, but his loan has been extended to the end of the season.

Alex Ray-Harvey is a midfielder who started his career at Burnley. He had loans at Fleetwood and Barrow before joining Barrow for a permanent five year stay. After two years with Guiseley he joined Hednesford Town, but after six months made his move to Stafford in July 2019.

Ex Nottingham Forest Junior Centre back Ethan Stewart was loaned to Billericay and Alfreton before being released in July 2020. After nine months with Nuneaton he returned for a short stay at Alfreton, before coming to Stafford in October last year.

Defender or midfielder James O’Neill played his junior football at Telford, before moving into the Welsh League with Newtown.

He left after one year and was out of the game until signing for Chasetown in July 2017, but returned to Newtown for a second spell in 2020, from where Stafford signed him July last year.

Michael Tait-Moran is an ex Aston Villa Junior striker, who joined Tamworth in September last year. He came to Stafford on loan in November and will be with them until of the season.

Tom Tonks is another midfielder with plenty of experience. Starting out at Tipton Town and Halesowen, he had the first of a number of spells with Stourbridge from July 2015.

He left after three months but was back again only three months later, after a spell at Telford. Further moves to Solihull Moors and Alvechurch were both interspersed with returns to Stourbridge, before arriving at Tamworth in March 2020, from where he joined Stafford July last year.

Striker Kaiman Anderson only arrived at the club a month ago, but is yet to open his scoring account. A former Shrewsbury Junior, he was loaned out to Telford, Halesowen and Oxford City, before joining Southport on his release. He was loaned to Nantwich before joining Stourbridge and spent 18 months there before a two and a half year stay at Leamington preceded his move to Stafford.

Midfielder Alex Fletcher is another ex Shrewsbury Junior in his second spell at Stafford. He had a year with Tividale following his release, before the first of two stays at Welsh League Newtown.

Southport then preceded his arrival at Stafford in October 2017, before a return trip to Newtown after three months.

Stourbridge was the next stop., before a third spell at Newtown in February was followed by his move to Stafford in July.

Joe Cuff was another returnee when he came back to Stafford in July 2020. A winger who originally came to our hosts from Market Drayton in 2018/19, he had a spell back with the Shropshire club before his latest move. He also played for Whitchurch Allport.

Winger Theo Bailey-Jones was at Wrexham as a junior. He was loaned out to Colwyn Bay and joined Macclesfield in 2015. Stays at Stalybridge and Altrincham followed, before his first stop at Stafford in July 2018.

After two years he left for Hyde, from where he returned last October.

Tre Pemberton is a right sided play anywhere player who played his early football at Blackburn and Stoke. Moving onto FC United, he was loaned to Longridge before joining Stafford in October.

Midfielder Joe Kenton had been at Newtown for two and a half years before coming to Stafford in July 2020. He played his junior football at Wolves and Shrewsbury and also played for Tividale.

Jake Charles is the Grandson of Welsh legend John Charles and has been capped himself at Under 16, 17, 19 and 21 levels.

A left winger he was picked up by Huddersfield Town from Garforth Villa. After a loan at Guiseley, he joined Barnsley and was loaned out again to York City, before joining Stalybridge in 2017.

His first spell at Stafford was in July 2018, when after two years he left for Farsley, only to return a year later.

Centre back Jon Moran was a Crewe Junior, who joined Nantwich after an initial loan. He joined Forest Green in 2017 and was loaned to Halesowen, before joining Chester a year later.

He then spent just under a year at Bradford Park Avenue, before coming to Stafford in November 2019.

Defender Ben Woods is a left sided player, who was signed from Spanish side Lorca in August last year and has also played for Stalybridge Celtic.

French midfielder Louis Malandjou played most of his junior football in Switzerland, but had six months at Nottingham Forest.

He has played for Anagen Derynias and Akritas Chlorakas in Cyprus and Salgueiros and Sanjoanense in Portugal, before returning to the UK with Welsh League Bala Town.

Further stops at Caernarfon and Tamworth followed, before he joined Stafford last November.

Midfielder Tom Carr arrived in July last year from Wythenshawe Amateurs and defender Luis Morrison is on a season long loan from Macclesfield, having previously played at Radcliffe, Nuneaton, Altrincham and Alfreton.