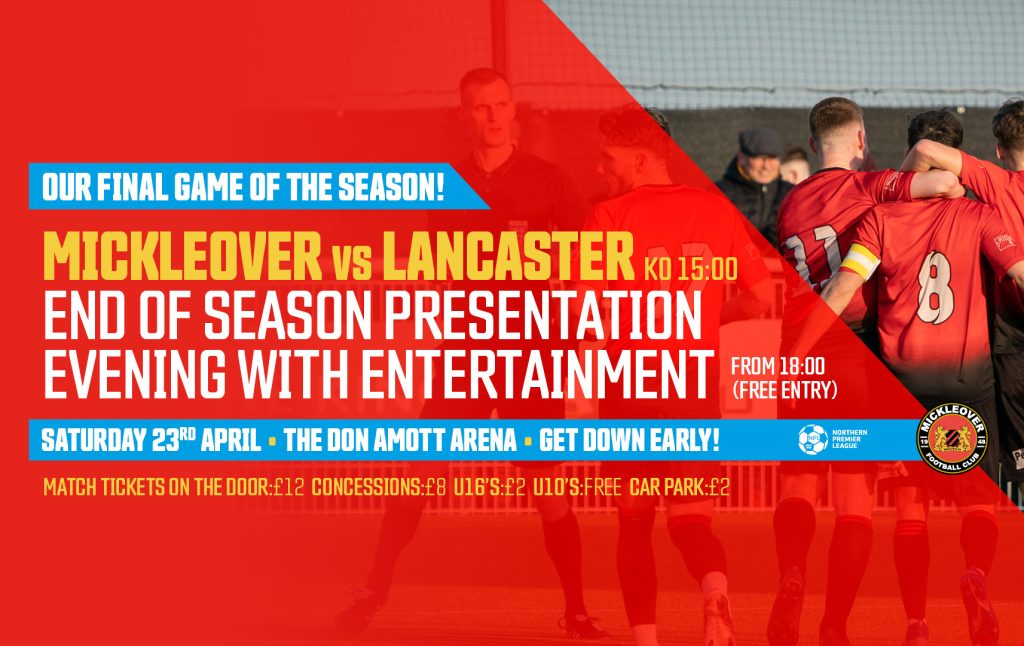 It’s been a long and difficult season, with a threat of relegation in the air pre-Christmas. But the strength in depth of the relatively young squad has seen John McGrath’s  Mickleover rise to 12th in the NPL table, after some outstanding performances.

Saturday’s match against Lancaster City at the Don Amott Arena is the last of the 2021/22 season and we see our visitors one place above us in 11th, but without a win or a goal since March 26th, when they beat Nantwich 1-0 at home.

Goalkeeper Curtis Anderson was capped by England at Under 16,17,18 and 19 levels, having joined Lancaster from Wycombe Wanderers at the end of January.

He was a Manchester City junior who then tried his luck in the US with Charlotte Independence. He joined Wycombe on his return to the UK and was loaned to Walton Casuals and Eastbourne.

Jordan Eastham is a keeper on loan from Blackburn Rovers and Max Povey has also been a regular sub keeper, a former Morecambe junior he had a spell at Conwy before joining Lancaster in 2019.

Defender Liam Brockbank arrived from Workington last July. He was a junior at Carlisle Utd, but was released after nine years and is an England Futsal International.

Fellow centre back Andrew Teague was a Macclesfield Junior, who was also loaned out to Hyde. On his release he joined Leigh Genesis, before arriving at Lancaster in January 2009. He then spent almost nine years at Chorley, before returning to Lancaster in July 2020.

Glenn Steel is another long serving centre back who has been with our visitors for five years. His early career was at Bamber Bridge and Fylde, before his first stop at Lancaster in December 2013. He returned to Bamber Bridge a year later, where he stayed until January 2017.

Centre backs Joe Blanchard and Jack Byrne are both currently on loan, Blanchard from Preston North End and Byrne from AFC Fylde.

Former Bolton Wanderers Junior midfielder Sam Bailey has been at Lancaster for almost five years, after an intervening three-year spell with Kendal Town.

Midfielder Charlie Bailey came through Morecambe’s Academy. He was loaned to Kendal Town and joined them following his release. He has been at Lancaster since July 2017 and his full name is Lord Charles Bernard Rufus Montegue Bailey, Earl of Cork.

Christian Sloan is another ex Kendal Town player. The midfielder was also a Barrow Junior and joined Lancaster in September 2020.

Yet another ex Kendal player is midfielder Simon Wills, he has been at Lancaster for well over nine years over two spells, racking up around 300 appearances.

Midfielder Niall Cowperthwaite has spent most of his career in Cumbria and North Lancs. From Morecambe’s Academy he played for Workington, Kendal, Penrith and Barrow, before rejoining Workington after a two-year career break. He has been at Lancaster since July 2019.

Midfielder Rob Wilson is in his third spell at the club, having returned in 2018, while Ben Anderson is a more recent product of their own youth scheme.

Enock Likey is another relatively new arrival. The former Bolton junior was also at Chorley, before a four-year break brought him to Lancaster in February.

Joe Rodwell-Grant is one of the more recent signings. A junior striker on loan from Preston North End, he has also had a couple of loan spells at Bamber Bridge.

In recent weeks Lancaster own junior strikers Finley Lynch and Joel Davidson have become part of the first team squad too.

Kick off as usual at the Don Amott is 3pm, if you don’t make it you will have to wait until August for the next NPL action.