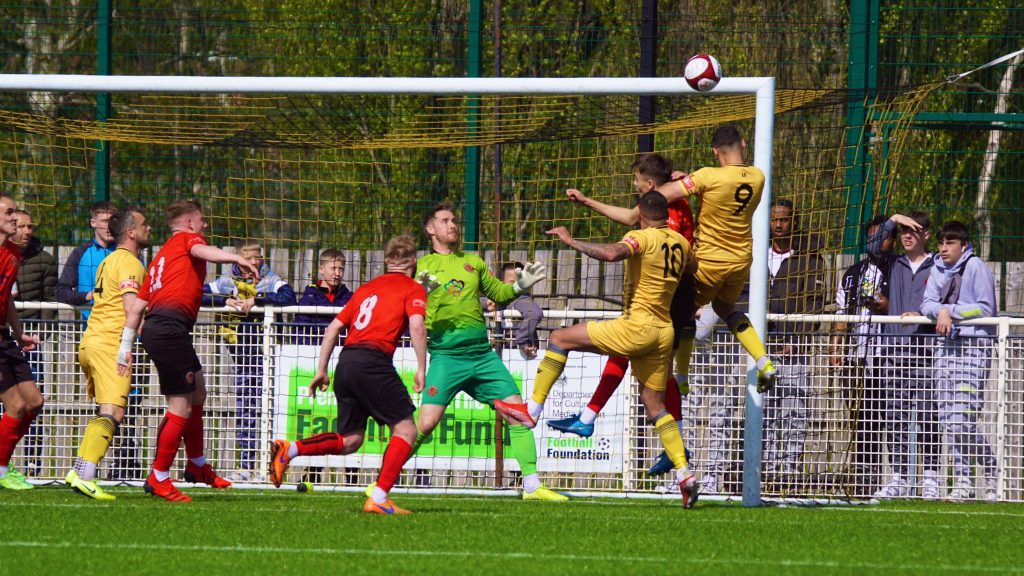 Mickleover came away from their second local Derby of the Easter weekend with a 1-0 win at Basford, thanks to a late second half strike from James Butler.

Basford earned the first corner after six minutes and a Thornhill ball into the box found Carr’s head, before Hearn flicked wide.

Walker made good use of the overlap for Sports to put a cross into the box after eight minutes, but it was too deep. Davidson-Miller soon followed up though with a low drive tipped away by home keeper Preston.

Milner drove forward and had a shot just off target 13 mins in, but Basford proved dangerous again from a Thornhill corner. With Hedge committed the danger was soon cleared, only for Hedge to make another save from Grantham’s effort.

Walker was on the attack again after 20 mins and his belting strike must have stung Preston’s hands as he tipped it away.

The Mickleover defence of Walker, Butler, Watt and Dolan survived a series of dangerous free kicks, before Davidson-Miller had another chance in the 27th minute. He picked the ball up and was never fully in control and the chance was gone.

Mickleover then had a free kick after 35 mins after Helliwell tripped Ravenhill, Walker’s shot was on target again and pushed away by Preston.

But only two minutes later it was 1-0 to Mickleover, when Butler found the back of the net, so it stayed at 1-0 into the half time break, despite Hedge making a save with his feet from Grantham’s shot, one minute before the whistle.

Davidson-Miller continued to look dangerous, but luck wasn’t on his side. Roma blocked his 50th minute run and then Hearn flicked an attempt wide for the hosts from a Betts cross.

On the hour Davidson-Miller was in the action again with a one on one, before keeper Preston intercepted.

Mickleover brought Moore on for Wright and Agustien for Milner, followed a few minutes later by McDonald for Davidson-Miller.

Dunn had a powerful shot for the visitors after 79 mins saved by Hedge and in the 90th minute Ravenhill had the final shot of the game just wide.

Following the defeats at home to Basford in both the NPL and FA Cup, it was a just reward for Mickleover to end their season on the road, with just the home game against Lancaster on Saturday to complete a character building season.