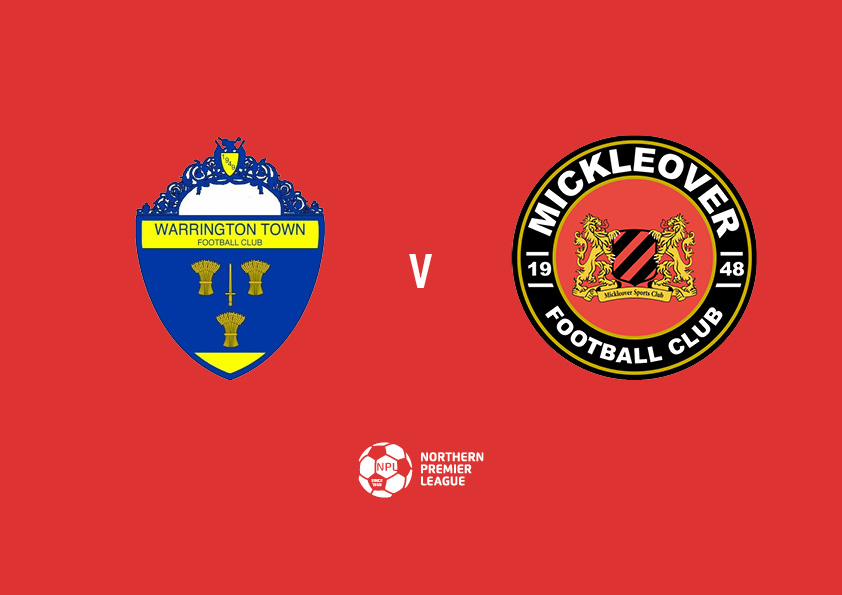 It was three more points for Mickleover on the road last Saturday, when a late goalkeeping error handed Stuart Beavon an early Easter gift at Warrington.

The hosts were first on the attack with Hedge comfortably saving from, a Grivosti effort after six minutes.

Only three minutes later the same player took the first corner of the game, before Regan’s header found the side netting.

As in recent games Dales’ pace again troubled the Warrington defence and after 10 minutes he cut in from a run on the left, forcing keeper Atherton to make his first save.

Hedge was soon in action again too, pulling out all the stops to tip a Mols free kick over the bar, before Mickleover began to push forward again.

16 minutes in and Dales won the ball in midfield and found Moore in space. The young striker picked his spot but the final shot was deflected away by Duggan.

Although it remained 0-0 Mickleover were beginning to have more and more possession, but after 20 minutes there was another chance for Warrington, when Harris got his head to a Grivosti corner, but it was safely into Hedge’s hands.

The Mickleover back four of Walker, Watt, Mann and Dolan were looking pretty solid, and apart from a couple of long range efforts, Warrington had little shooting opportunity as time approachedand it remained 0-0.

The creative midfield combination of Ravenhill, Radcliffe and Agustien hadn’t managed to give Mickleover the edge, so after 58 minutes Milner came on for Radcliffe.

The next change was up front with McDonald replacing Moore after 69 minutes and four minutes later the deadlock was broken.

McDonald was in a dangerous attacking position which brough Atherton out of his goal to clear. But his clearance went straight to Beavon who was left with an unguarded goal to slot home for 1-0.

As Mickleover strengthened their defence for the final minutes, Mills came on for Ravenhill and as Warrington pushed forward to seek the equaliser, Atherton was forced to save again as McDonald latched onto a Mickleover counter attack.

So now were up to 13th in the NPL with four games left, starting with our penultimate away game of the season at Gainsborough on Saturday.