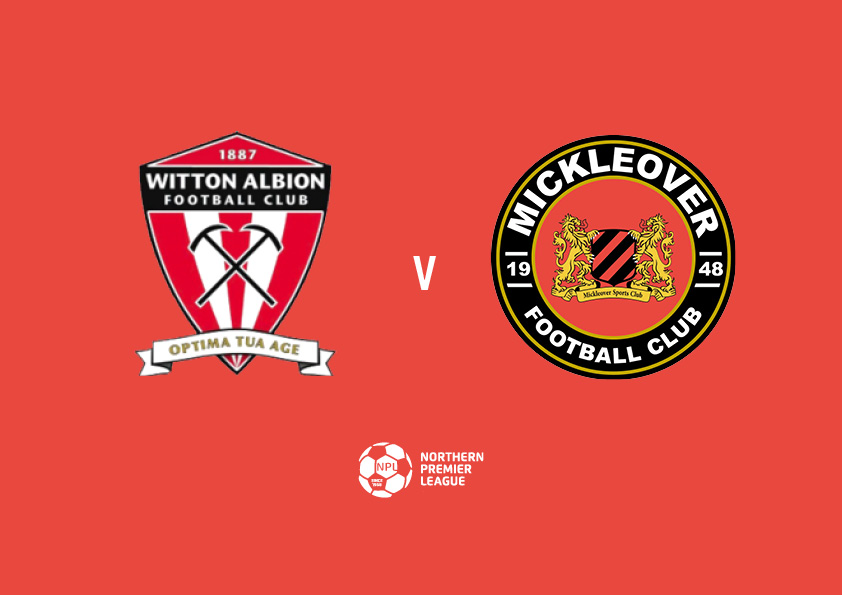 It’s back on the road again this Saturday for Mickleover FC, when they visit next to bottom Witton Albion.

It’s been a disastrous start for Witton who have so far lost all three of their home games against Lancaster City, South Shields and Nantwich, leaving them next to bottom in the NPL.

They have one win under their belt away at Morpeth and also came away from Basford and Gainsborough with a point. Their last match was a 3-1 defeat at Atherton in the FA Cup, but in their last league match at Matlock, they were on the receiving end of a 9-0 hammering.

Goalkeeper Greg Hall is in his second spell at Witton, having re-signed in July after a couple of seasons at Nantwich. He came to Witton originally from Northwich in 2018 and has also played for Ashton, Ramsbottom and Glossop NE.

Second choice keeper Raj Gill is a former Leicester City Junior. After a spell at Kettering he played for Frederico Mayo in Spain and has had spells at Tamworth, Cirencester and Alvechurch, before arriving at Witton September last year.

Left back Isaac Baldwin joined from Farsley Celtic in October 2019, where he played since leaving Spennymoor two years earlier. He started out at Huddersfield and also played for Halifax, Brighouse and Ossett Albion.

Steve McNulty is a former Liverpool Junior, who played at Burscough, Vauxhall Motors, Barrow and Fleetwood, before joining Luton Town. He was with the Hatters that regained league status from the Conference to League Two in 2013/14. After 125 appearances at Luton he moved on to Tranmere Rovers and York City, before coming to Witton in August last year.

Left back George Nugent progressed through Tranmere Rovers youth set up and was awarded a professional contract. He played in a couple of Rovers EFL Trophy matches as well as several times being on the first team bench.  He signed for Witton at the end of July and his brother Ollie is an England Paralympics international.

Nick Ryan is a centre back who joined Witton from Stalybridge in 2017. After multiple leg fractures in 2018, he missed a whole season, before going out to Runcorn Linnets to regain his fitness and a return to Witton.

Will Sutton is another central defender, currently on loan from Oldham Athletic. He made one first team appearance for Oldham last season. He scored against Lancaster in August.

Josh Wardle played his early football at Lancaster and Kendal, before joining Skelmersdale in 2017. He captained the John Moores University side and came to Witton on October 2017. He has also been club captain.

Crewe Alexandra U18 & U23 defender Nathan Woodthorpe is on a month’s loan. He suffered an injury earlier this year and is looking to gain valuable match time in his quest for a first team debut. He scored for Witton in their 1-1 draw at Gainsborough on the opening day of the season.

Midfielder James Foley is one of Witton’s long serving players, having been signed from Marine in 2017. He started at AFC Liverpool before joining Macclesfield Town juniors. He moved on to Buckley Town and Camell Laird, before his three year spell at Marine. He is the Witton penalty taker and scored one of the goals in Witton’s 2-2 draw at Basford.

Jawad Jebrin is another attacking midfielder and former Warrington Town junior. He has also played for St Helens. He has one goal under his belt this season in their FA Cup win at Scarborough,

Callum Leigh was a summer signing by manager Carl McCauley from The New Saints in Welsh League. The midfielder played in both Rochdale and Oldham Academies. He also had loans at Oswestry and Ellesmere Rangers and is playing himself back in after a serious leg break.

Cesaire Lingoube played junior football at Morecambe and Stalybridge, before moving on to Droylsden and Northwich in 2017. The striker or midfielder had his first spell at Witton in October 2020 before joining Matlock Town. He returned to Witton last month.

Former Bolton Wanderers Junior midfielder Danny McKenna originally had a dual registration with Witton and Runcorn. The midfielder has been full time at Witton since September 2017.

Wing back or midfielder Tom Owens started out at Preston North End. He played at Marine and had a short spell at Witton before venturing overseas to the US and Australia. He came back to Witton in September 2017 from Brunswick City. He scored one of the goals in 2-2 draw at Basford too.

Josh Paterson is new to the first team squad, the midfielder having come through Witton’s own youth scheme.

Midfielder Ryan Rogers came from the Burnley Academy. He then went north of the border to Gretna, before joining Glossop last season. He is currently on loan from Macclesfield.

Billy Smart is another midfielder who played his youth football at Marine. He went to Burscough and Bootle before returning to Marine in 2016, then joined Warrington a year later. He came to Witton in summer 2018.

Striker James Hooper came through the ranks at Rochdale, making a couple of first team appearances. He had loans at FC United and Stockport before joining Carlisle Utd in League two. A return trip to FC United followed, plus stays at Radcliffe, Salford City, Chorley, West Didsbury & Chorlton and Altrincham. He has been at Witton since 2020 and is the joint top scorer this season, with two goals, against Lancaster and Scarborough.

Rob Hopley came through Macclesfield’s youth scheme. He moved on to Winsford, Leek Town and Colwyn Bay, becoming a prolific goal scorer. He scored the first goal for the newly formed Chester too, before coming to Witton in November 2015. He scored 85 goals in 177 games, but a serious injury kept him out for 2019/20. He scored the Witton goal in last weeks FA Cup defeat at Atherton.

Striker Will Jones came from Colwyn Bay in 2017, having spent most of his career in the North West with Bootle, South Sefton, AFC Liverpool, Burscough, Nantwich, Marine and Warrington.

Callum Saunders is a recent signing from Nantwich. Son of Welsh International and former Rams star Dean, Callum is a Welsh under 19 and 21 international himself.  He came through the Crewe Academy and has played at Notts County and Curzon Ashton too. He scored both goals in their only win so far this season at Morpeth.

Striker Liam Thomas is an ex Derby junior, who also spent time at Shrewsbury before arriving at Witton in the summer.