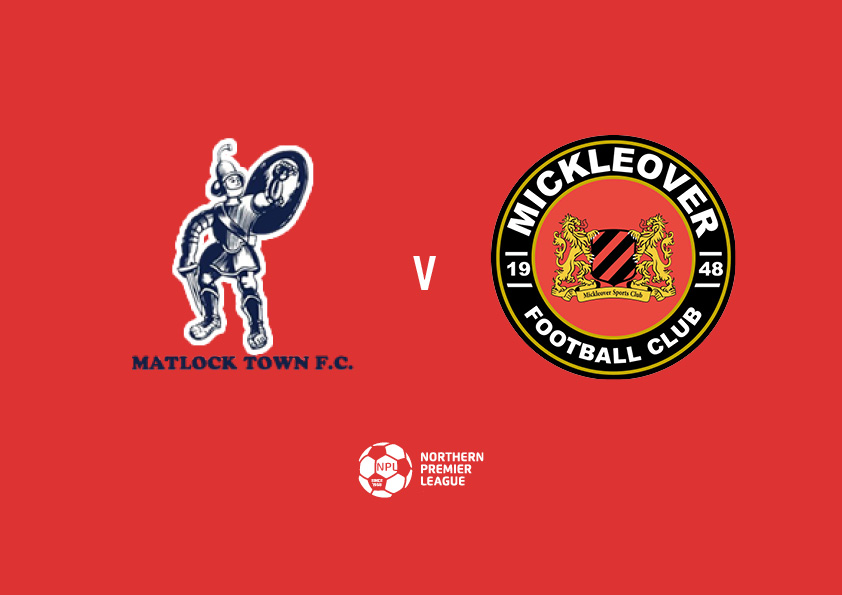 Local rivalry, first in the table with 10 wins, just two of the reasons why Tuesday night’s visit to Matlock Town is going to be tough.

With six wins out of six at home in the NPL after a 1-0 defeat on the opening day of the season, Matlock have been challenging for honours from the start. Their only other league defeat was at Stafford, when they went down 1-0, but surprisingly had a 3-0 defeat at home to Belper Town in the FA Cup too.

Manager Paul Phillips has had a few ins and outs in his squad already this season, but the nucleus of his side have been ever present.

Former Shrewsbury Town Junior keeper Shaun Rowley has played every game in this seasons campaign. During his time at Shrewsbury , he had a few months on loan at Watford, as well as spells at Halesowen, Chorley and Tamworth.

After seven years at Shrewsbury he was released in 2018 and then spent a year each at Halifax Town and Solihull Moors. After a couple of months at Kettering, he came to Matlock in September 2020.

Defender  Reece Kendall made history when he  was signed from Brighouse Town, as he was the first player the Yorkshire club had ever received a fee for. He played at Hyde and Silsden before going to Brighouse, having started out in their own under 21 side. He has also scored three goals in this seasons campaign.

Adam  Yates  in his 13th full season with Matlock having joined them from Shirebrook Town in March 2009 following an impressive performance against Matlock in the 2008/09 Derbyshire Senior Cup semi final. With 500 appearances for the  first team  underlining his tremendous consistency, mainly as a central defender,  he has also played as a full back or in midfield. He started out as a youth player with Chesterfield before joining Belper Town. He was voted fans player of the year in 2012/13, 2015/16, 2017/18 and 2018/19.

Former Welsh under 17 and under 19 international centre back or defensive midfielder  Ioan Evans has recently arrived from Stalybridge Celtic. A former Newport Academy player he had a spell at Sheffield United and was loaned to Boston Utd, before joining Gainsborough Trinity. Moving on to Tadcaster in July last year, he spent one year with them before starting this season at Stalybridge. He scored his first goal for the club in last Saturday’s home win again FC United.

Centre Back Ryan Qualter came to Matlock last summer from Alfreton Town. He is another ever present this season, who started his career at Ossett Town. He then joined Bradford PA and had a loan spell at Scarborough, before spells at Shaw Lane and Boston Utd preceded his move to Alfreton in July 2019. He has also found the net on one occasion this season.

Mark Lees is an experienced defender or midfielder, ever present this season. He had played for Hyde, Altrincham and Stalybridge, before moving on to Stockport County, Telford and Ashton Utd. He came to Matlock last summer after a spell at Mossley.

Winger Alex Byrne has been at Matlock since March last year. He began that season at Warrington, before moving to Buxton in Autumn 2019, having previously played for both Shaw Lane and Gainsborough Trinity. Another ever present with four goals to his name this season.

Alex Wiles started his career as a midfielder at Rotherham, before his release sent him to Stocksbridge Park Steels. His next stop was Tadcaster before joining Gainsborough, from where Matlock signed him in pre-season. He has appeared in every game, one as sub.

Liam Hughes is a well travelled midfielder, having started as a junior at Scunthorpe and Cambridge Utd. After a short spell at Inverness Caledonian Thistle, he returned to England with Barrow and has since played at Guiseley, Billericay, Darlington, Gainsborough, Stratford Town, Bradford PA and Frickley, before arriving at Matlock last summer. He had a loan at Kettering but has been with Matlock full time again since February. He has played eight games this season, scoring four times.

Currently on loan from Halifax Town, Striker/Midfielder Jamie Cooke has scored three times from two appearances. The ex Fleetwood Junior attacking midfielder has also played at Colne and had a loan at FC United.

Callum Chippendale is another attacking midfielder who went to Bradford PA after his release from Barnsley Juniors. Moves to Boston, Gainsborough and Shaw Lane followed, before joining Buxton in early 2018. He came to Matlock July last year, from Buxton. He has made 10 appearances this season, three as sub and scored two goals.

Ross Hannah was a junior striker at both Sheffield Utd and Wednesday. He then joined Worksop Town and Stocksbridge Park Steels, with loans at Gainsborough and Belper Town, before a permanent move to Gainsborough.

He was at Hednesford and Belper before his first spell at Matlock  from 2008 to 2011 during which time he won the NPL Golden Boot. Moving onto Bradford City where he played in League Two, then Halifax, Grimsby, Chester, Barrow and Southport , before returning to Gainsborough as player manager.

After a spell at Cleethorpes he came back to Matlock last November. He has made six appearances this season and scored two goals.

Jesurun  Uchegbulam is another midfielder who came to Matlock during the summer. He started in the junior teams at AC Milan, and has played for Mossley and Stockport in the UK. He has appeared in all but one game this season, with five starts  and seven substitutions, scoring two goals.

A former Scottish Under 19 International striker, Craig King was a Leicester City graduate, who had loans at Hereford, Northampton, before joining Telford after his release.  Spells at Worksop, Buxton, Bradford PA, Salford, Scarborough, Gainsborough and Alfreton followed before coming to Matlock in October 2018.

He had a long spell out with a serious knee injury and moved to Frickley in July, but returned to Matlock after only one month. He is yet to make a start this season, but has been a sub four times.

Jerome Greaves is currently on  loan from Rotherham until January. The young striker has made three starts and scored two goals.

Former Bolton Wanders junior Kayde Coppin is a player coach at Matlock. The striker has played at Flixton, Trafford, Northwich Victoria, Rossendale United, Atherton LR, Bacup Borough and Glossop North End. He has reached the play-offs with Mossley, Ashton United and Buxton and has also managed Manchester Ladies between 2014 and 2016. He came to Matlock last summer and has made two substitute appearances this season.

Jamie Sharman is a young centre back who came to Matlock in the summer after his release from Chesterfield. He has had loans at Kidderminster and Blyth Spartans too and made eight starts this season.

Ashton Hall is another centre back who was released from Sheffield Utd Under 23’s this summer. He had started out at Matlock in 2019, and has also been loaned to Guiseley. He has made two starts and two sub appearances so far this season.

Midfielder Lirak Hasani is a loanee from Doncaster. He has made five appearances at Doncaster and made two starts for Matlock, with two more as a sub and scored one goal.

Aram Soleman is a brand new singing who made his debut against FC United last Saturday. The former West Bromwich Albion midfielder has played at Solihull Moors, Coventry Utd, Rushall, Guiseley and Bromsgrove before joining Tamworth last October, from where Matlock have signed him.

Liam King is another midfielder back at Matlock for a second time. He was at Rotherham as a junior, and had a loan spell at Altrincham before a permanent move to Matlock in July 2012. After four years service he joined North Ferriby and moved on to Halifax, Gainsborough, Frickley and Grantham. He managed Gainsborough for a while too, and came back to Matlock this summer.