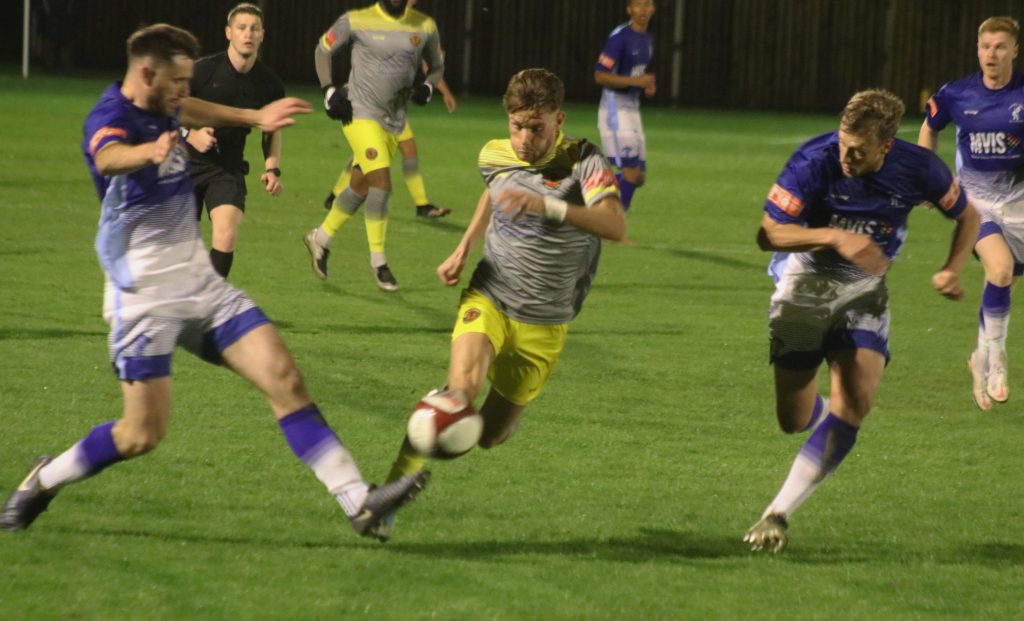 A third 1-0 defeat for Mickleover out of the last four games, but it was so nearly a late point at table topping Matlock.

Matlock had two consecutive corners in the first two minutes, before Kendall fired his shot high over the bar.

Then four minutes later they were on the attack again but the cross was cleared by the Mickleover defence, only for the hosts to come straight back with Cooke setting up Byrne, whose shot was well wide.

The first real move into the Matlock box came when Hawkins found Morris clear on the left, but the wing backs through ball was too long for Satchwell. 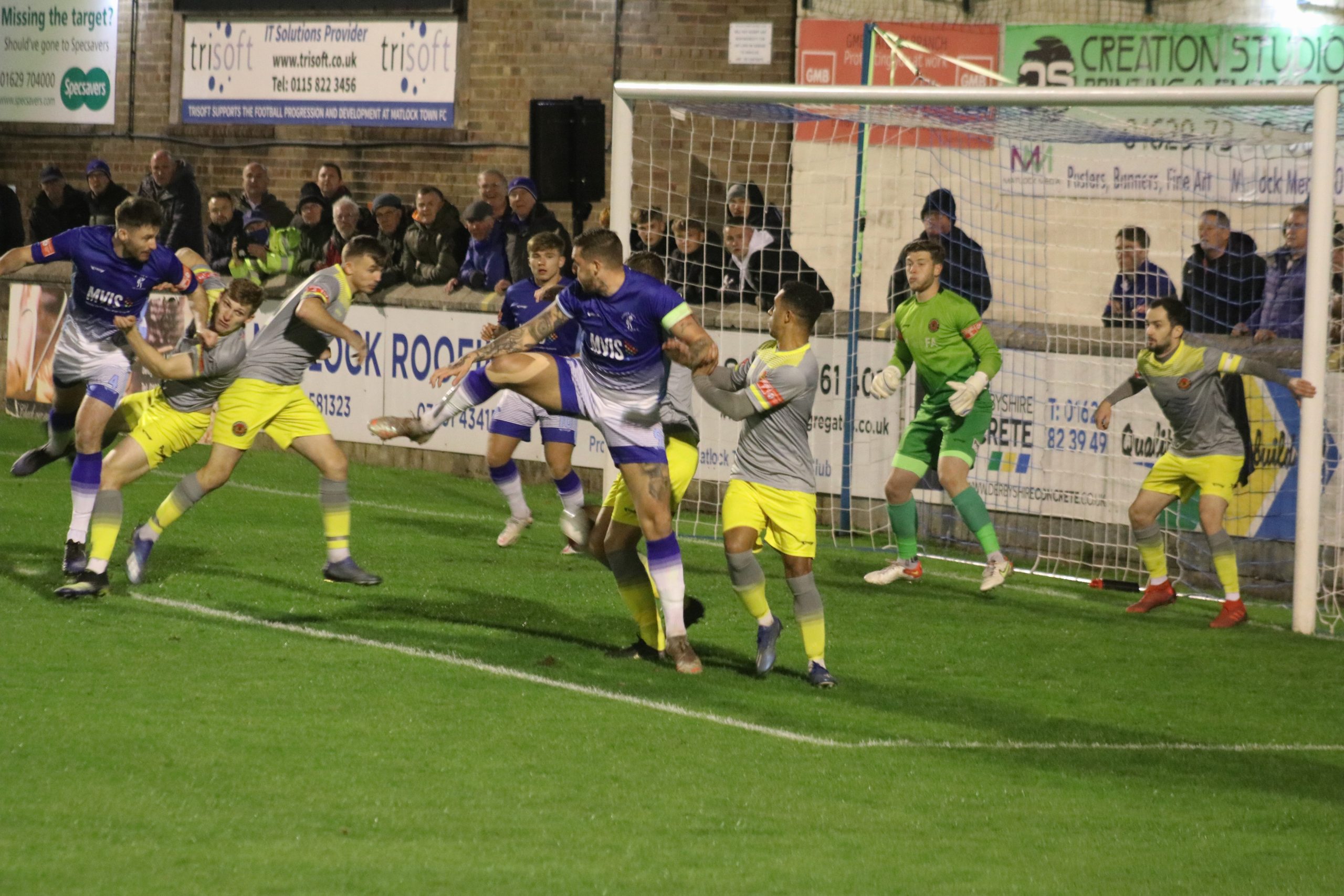 The Mickleover defence were under attack when Bennett fouled on the edge of the box. Kendall fired in a challenging shot from the free kick, which Hawkins tipped out past the post.

Hawkins was in action again saving an Evans header, before Cooke had a shot blocked.

Mickleover had been having difficulty getting out of their own half, but after 17 minute Bennett made progress down the right, found Warren, who set Holmes up for a long range shot just past the post.

Matlock were soon attacking again and when skipper Hughes spotted Hawkins off his line, he tried a lob which was easily taken by the Sports keeper.

Rowley the home keeper was finally called into action after 22 minutes, Satchwell had been tripped just outside the box and Warren’s fizzing free kick was taken safely.

There was a corner for Mickleover shortly afterwards after another overlap from Bennett had earned a corner, but Dales final shot was over the bar. 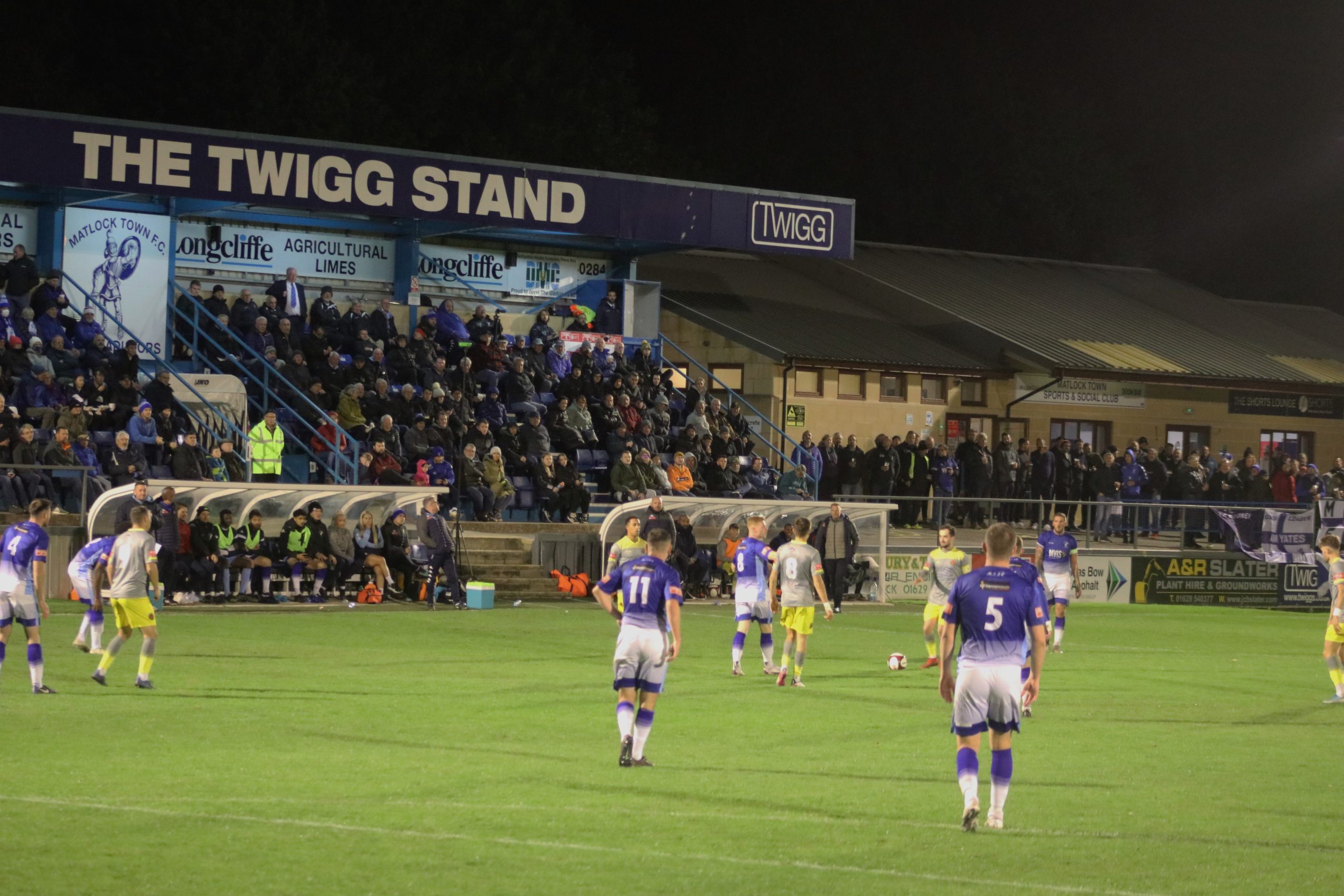 Just after Kendall had put a cross over the face of the Mickleover goal, with no one to receive, he was substituted and Uchegbulam came on.

It was in the 26th minute that Mickleover were lucky not to concede the opening goal. Bateman and Watt had taken everything thrown at them so far by the Matlock attack, but there was general chaos with both players on the ground and Hawkins out of his goal. The first clearance came back to Cooke who hit the post, the second hit Hawkins and rebounded just past the post.

Evans then had a close range shot saved by Hawkins, before Matlock defender Yates was booked for tripping Dales, after he had collected a good clearance from Hawkins.

Hawkins had to punch away another Matlock attempt, before Lees blocked a good attempt on goal from Bennett.

39 minutes and the Mickleover defence was finally breached, when Byrne beat Morris on the left before crossing into the box.

It was initially cleared by Hawkins, but not sufficiently and as it fell at Hughes feet, he fumbled it over the line, 0-1.

It was close to second goal as the half time whistle beckoned. Watt was appealing for offside which wasn’t give, leaving Cooke with a clear shot which hit the post, before Hughes put the rebound wide. 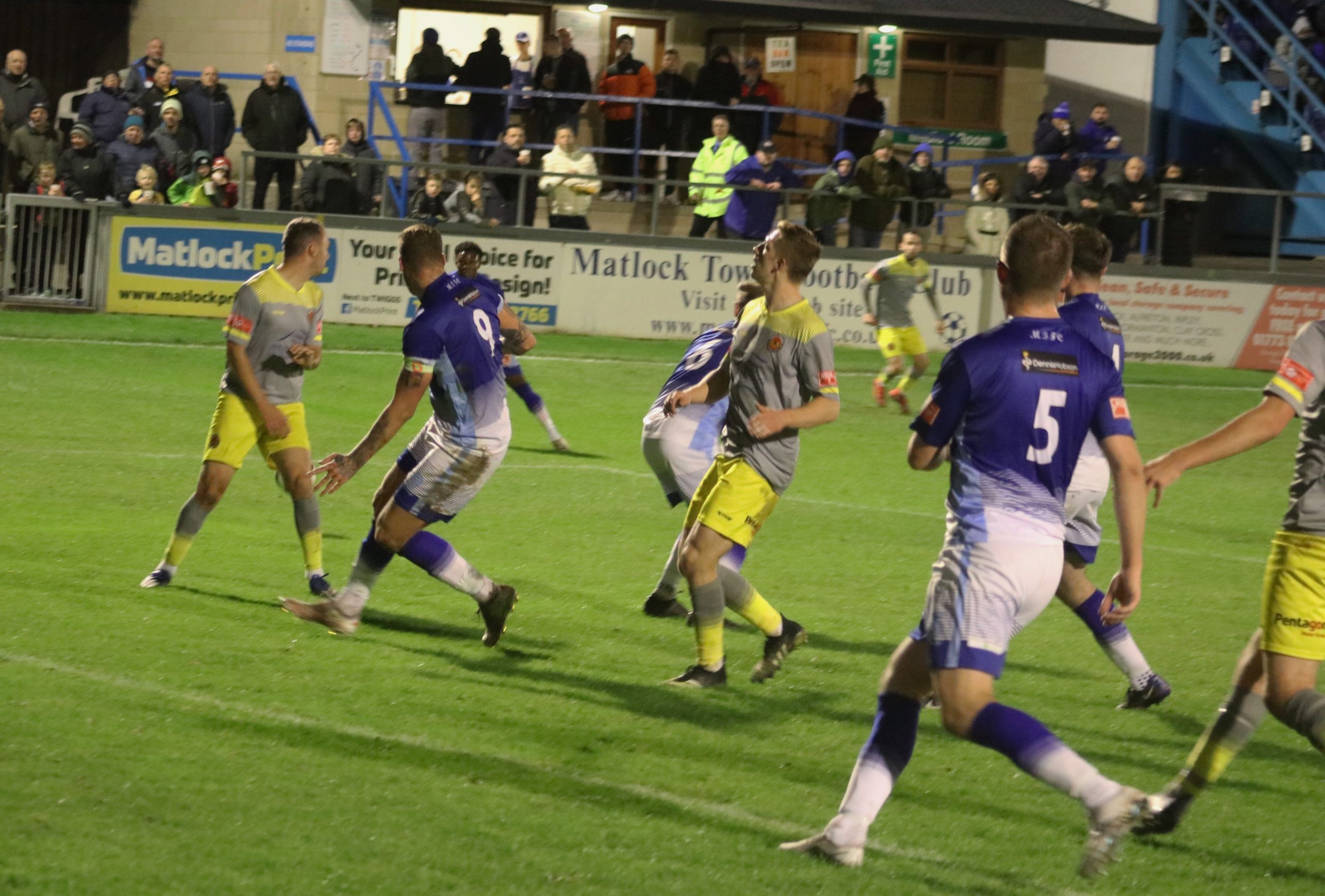 During the final minutes of the first half, it was obvious Hawkins was suffering some discomfort on his left side, with no sub keeper on the bench he played on.

Mickleover brought on Lewin for Watt and began to try and push forward more, with Warren letting loose with a 20 yarder, well taken by keeper Rowley.

But Matlock started to take control again and forced any initiative back, despite Warren’s efforts to lead by example and burst free from defensive duties.

Uchegbulam found Cooke on the right, but his effort was blocked by Bateman, before Qualter reacted similarly as Mickleover had a shot blocked from Dales.

Matlock made another substitution with Onyeka on for Cooke, but it was Hughes having another try for the hosts, after a break down in the Mickleover defence. Fortunately the Matlock skippers shot was well wide of the goal.

Holmes had a header deflected out by Satchwell, after a positive build up on the hour, which involved nice work from Bacon and Dales, after an initial ball from Warren.

Mickleover came into their best spell of the match, when Warren and Ravenhill were able to push forward and in the 65th minute it was almost there.

Dales got the ball into the box, but Satchwell and Bennett both initially failed to connect. The ball fell back to Bennett again who just couldn’t get it under control to get a shot in.

Matlock appealed for handball a few minutes later, but their pleas were waved away and Soleman then came on for Lewis King as the hosts third sub.

The hunt for the equaliser continued at a pace, when the ball broke out of defence in the 70th minute. Bacon crossed from the right hand byline, landing inches in front of Satchwell. But the young striker froze and no contact was made.

Bennett got a cross into the box but found no one there too, and 75 minutes in Bacon found Satchwell again in the box, but time elapsed before a shot was made, but with Lewin and Warren following up they earned a corner.

Sports brought Agustien on for Holmes for the last 15 minutes, but the whole defence seemed to split wide open as centre back Qualter strode up field before shooting into Hawkins arms.

Hughes put a header just wide and Uchegbulam fired over as Matlock tried to make it safe.

After Satchwell found Dales who earned another corner, Byrne and Soleman had shots blocked, before Byrne fired over the bar.

Dales had been unable to find the freedom he revels in for most of the match, but in the 88th minute he broke free, only to be scythed down. The free kick from Agustien was powerful and accurate but failed trouble Rowley.

Barker came on for Bacon for the last five minutes and could have made it a dream debut. He was clear on goal with the keeper already over committed, but with the open goal begging, his shot pulled wide just beyond the left hand post.

There was certainly no lack of effort on Mickleover’s part, but once again the chances missed proved decisive.