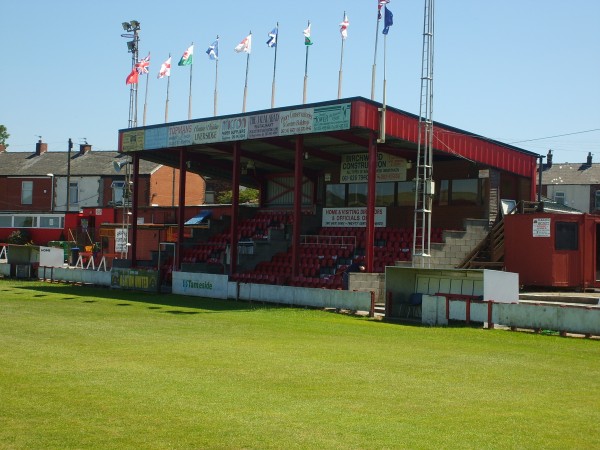 Sports were forced into changes with suspensions to player manager John Mcgrath and Tom Burgin and were also without Jack Broadhead.

They led at half time with a fine 22nd minute goal from Zeph Thomas who was found with a long ball down the middle by Danny Schofield and he finished well lobbing the stranded Terry Smith. Sports were well worth their interval lead having played some neat football but badly needed to score another goal that their approach play merited. Ashton were limited to one chance as Mark Lee’s effort from cross was tipped over by Jake Eastwood. Sports were denied a penalty for what seemed an obvious handball when Andy Dales’ chipped pass was stopped by Joe Connor and Dales was then wrongly flagged offside as he broke onto a pass from Lewis Belgrave from a good 10 yards onside.

All the main action came in the second half as Sports were unlucky to fall to defeat.

Ashton equalised on 63 minutes when the referee awarded a free kick for a high foot against Jake Bennett when 10 seconds earlier he waved play on for the same offence on Bennett. The free kick from Lee Gaskell was headed straight for Jake Eastwood but took a wicked deflection off Richard Smith to find the net. Sports took the lead again two minutes later as Dales found Thomas inside the area and his volley flew past Smith from 12 yards.

Step into the spotlight again another bizarre set of decisions from the referee as Sports were again appealing for a penalty with a blatant push on Thomas as waived away and when the ball played into Sports area, Clinton Morrison was clearly brought down, again waived away by the official, and the cross from Smith was headed goal-wards by Domenico Maisse. Eastwood parried the header but Stephen Mason crossed again and the ball hit Albert Lansdowne for an own goal.

The winner came in the 80th minute as Richard Smith scored a fine 20 yard shot that gave Eastwood no chance. Sports came off wondering how they had lost.