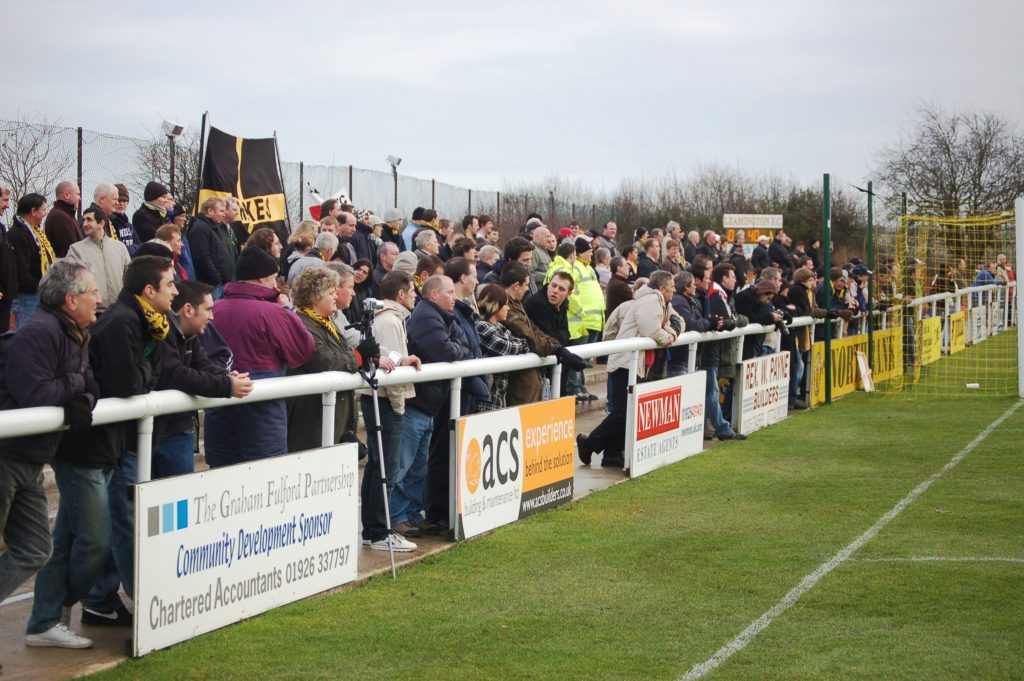 Leamington -Breedon, Taundry, Gudger, Pond, Hood, Mace (james 86), Baker-Richardson, Edwards, Rowe (Olukanmi 71), Thompson-Brown (Gittins 73), Obeng.
Sports – Eastwood, Bennett, Turner, Mcgrath, Burgin, Broadhead, Dales, Belgrave, Thomas (Baskerville 73), Litchfield, Schofield. Other subs Lansdowne, Norcross, Ptak, Morrison
Attendance 352
This was a brilliant performance by Sports as they knocked Southern Premier League Premier Division Leaders Leamington. They had not lost for over a year at home but Sports produced a great performance to progress into the next round of the FA Trophy.
Sports started the game a little nervously but gradually grew into the game. The home side played a direct game and bombarded Sports with a succession of long balls. Jake Eastwood spilt two shots in the first ten minutes but went on to make a major contribution to the win. In the 17th minute a shot from Andy Dales forced a diving save from Tony Breedon at the expense of a corner.
The opening goal came on 22 minutes as the excellent Jake Bennett ran at the defence and passed to Zeph Thomas, making his first full start of the season after injury, and he fired in a 20 yard shot into the bottom corner giving Breedon no chance.
Leaminton hit back and thought they had equalised but top scorer Ryan Rowe was flagged offside. Jack Edwards’ shot was held by Eastwood and Jack Broadhead did well to block a goal-bound shot from Rob Thompson-Brown. Ben Turner replied for Sports but his well struck shot was held by Breeden.
Sports were well worth their first half lead but the Home side piled on the pressure in the second half as they attempted to protect their unbeaten home record. It was Sports, though who produced the first chance of the half but Zeph Thomas saw his low shot saved by Breedon. Leamington were denied again by the offside flag as Rowe had again strayed offside. Eastwood held a Thompson-Brown free kick and at the other end Brodie Litchfield headed a corner just over the bar.
Jake Eastwood kept the lead intact with a sensational one handed save from a deflected free kick from Courtney Baker-Richardson. The home side then hit the post after the ball deflected fortunately into the path of Baker-Richardson who then saw his downward header from a corner pushed over the bar by Eastwood.

Special mention should go to Lewis Belgrave, the youngest ever player to captain a Sports side at just 17 – a real prospect for the future.

Sports held out to complete a fine victory.