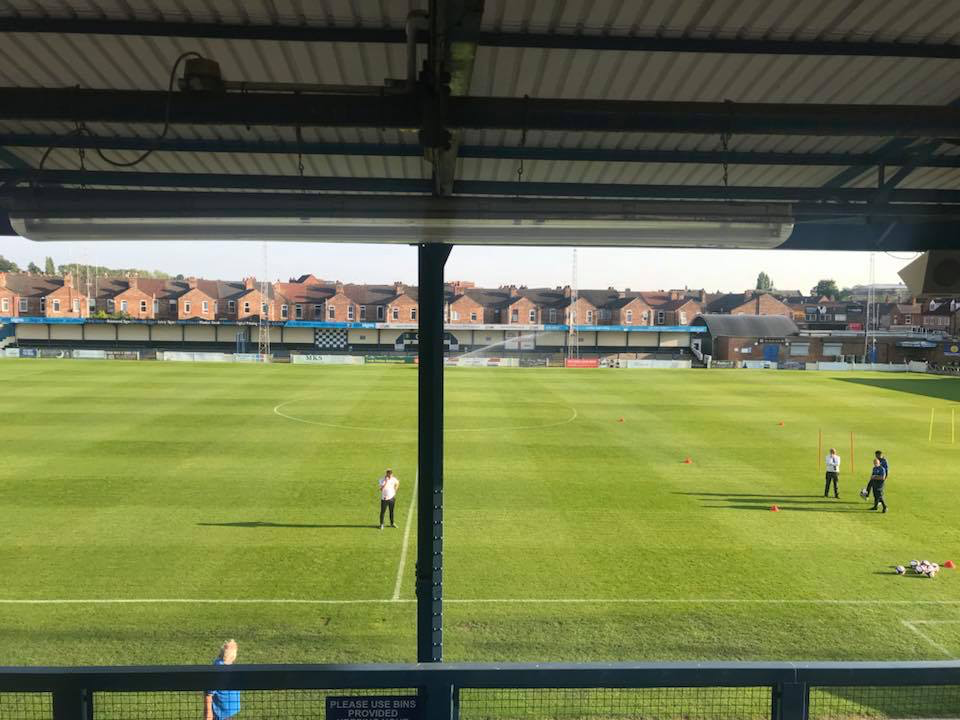 John McGrath and his Mickleover Sports side could have no complaints about their first loss of the league season as a rampant and dominant display from their Lincolnshire hosts, Gainsborough Trinity, saw them run out 2-0 winners. It could have been a few more had the hosts taken more of the opportunities that were presented to them throughout the game as Trinity striker Ross Hannah could have had a hatrick with the chances he missed. Sports had a few good spells throughout the match but as they did on Saturday rarely threatened the opposition keeper drawing another blank in front of goal.

There were two changes from the side that drew 0-0 with Stalybridge Celtic as McGrath looked to freshen things up. Curtis Burrows started at right back in place of Kevin Grocott and Evan Garnett came into the starting line up in place of Sports Boss McGrath who dropped himself to the bench in what looked like a 4-4-2 formation. The rest of the Subs bench included youngsters Tyreece Robinson, Isai Marselia and Will Norcross as well as new signing Mason Warren.

Gainsborough Trinity flew out of the blocks in the first minutes of the game and had several chances to score an early goal. Some dangerous looking free kicks and strikes from outside the box made Lewis King work early on to keep his goal intact. Ross Hannah then had the best chance of the game so far as Sports gave the ball away and as Hannah rolled the ball around King he was left with an open net but somehow managed to blaze his effort over the bar in a moment of a lack of composure from the former Matlock, Bradford and Grimsby striker. Nathan Stainfield then headed a corner wide before another well delivered corner kick which was dipping all the way forced King into a save just short of the goal line but he managed to keep the ball from scrambling in.

Then another golden chance from Hannah went begging as Sports nearly turned a promising corner kick into nearly conceding a silly goal. The corner was wasted as it was delivered into the box and a fantastic quick counter attack through the thirds resulted in the ball being played over to Hannah with a 1v1 chance to strike past King but the striker it seemed tried to square the ball to a team mate who wasn’t expecting the experienced forward to do that and the ball went wide of the right hand post. King was the forced into another save from a dangerous ball into the box before right on half time Sports finally had a chance of their own to threaten the Gainsborough keeper who was having a quiet night all round. A beautifully delivered ball in from Niall Doran was aimed for forward Evan Garnett but the former Burton Albion man couldn’t quite get on the end of the cross and it was played away from danger which brought the first half to a close.

The second half started the same way as the first had, but this time Trinity were more prolific with their chances. After a free kick from Hannah was blazed over the bar, a spectacular effort broke the deadlock, but it came from a Sports error. Oliver Roberts gave away possession in the centre circle after falling over on the ball and Liam King saw the opportunity with King off his line to lob him from just inside the Sports half leaving the Sports keeper with no chance as the ball went into the centre of the goal to give Trinity a goal nobody could argue they deserved.

Sports did mildly threaten to make a go of it to grab an equaliser with Jarman setting up Doran for a blocked effort and a Roberts’s free kick going over for a goal kick. But ultimately Gainsborough killed the game off with just less than 20 minutes to go as another error in possession cost Sports dearly. This time it was former Trinity man Jake Scott to give the ball away which gave the hosts an opportunity to move the ball quickly and set up Alex Byrne on the right hand side of the box to unleash a ferocious strike that had gone into the back of the net before King could even see it coming.

Sports then made a couple of changes to try and get themselves back into the game as Jake Scott and Evan Garnett made way for new comers Mason Warren and a first appearance from Dutch striker Isai Marselia. With no further chances being created Sports then threw on Will Norcross in place of Niall Doran in the last 10 minutes. Curtis Burrows managed to pick up a yellow card for a late tackle before Trinity striker Ashley Worsfold forced a decent save out of King moments later to keep the score down to two.

There would be one final chance for Trinity to grab a third but it wasn’t to be as substitute and former Altrincham striker Damian Reeves nearly placed a neatly dinked effort over King into the net but fortunately for Sports the wall was just wide of Kings left hand post. After four minutes of quiet stoppage time the game came to an end to signal Sports first league defeat and see them drop to 20th in the very early standings in the table. It’s still way too early to start panicking and McGrath and his players will know that the high expectations they have set were not anywhere near net during the 90 minutes and will be looking to bounce and register their first win and goal when the head back to the Don Amott area for their first home game against another relegated side in North Ferriby United on Friday 24th August with a 7:45pm Kick Off.