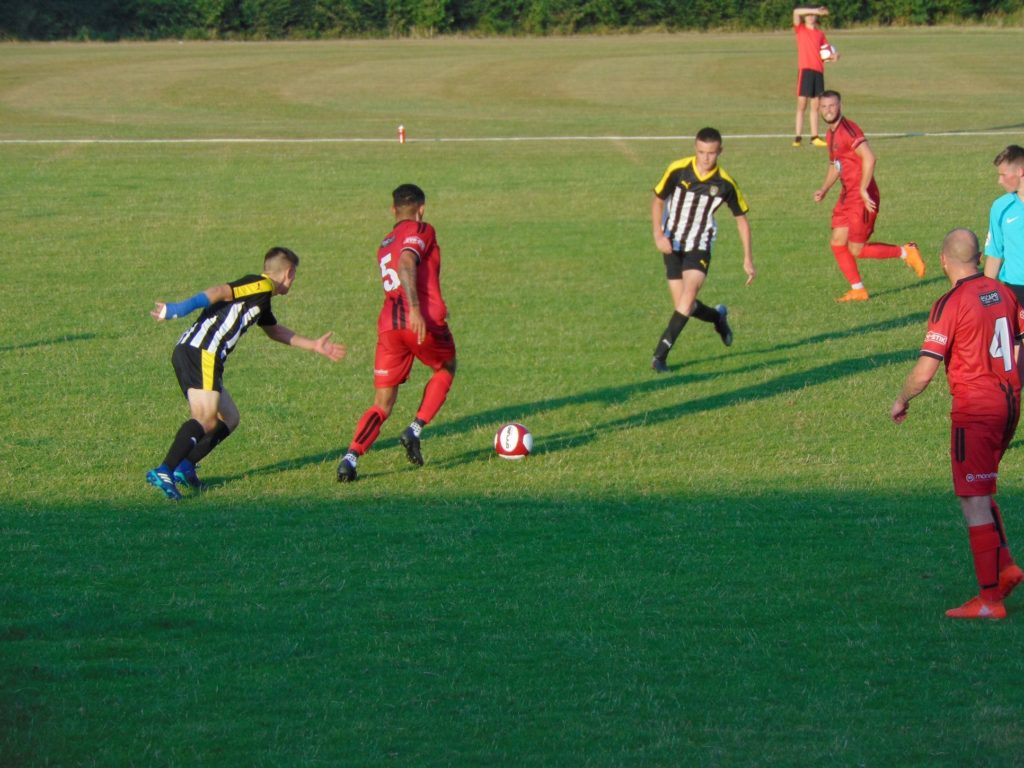 Mickleover Sports got their pre season off to a winning start as they took the victory in a game against a very young Notts County side. Tom Eccleshall, the 16 year old product of the Mickleover Juniors side scored the only goal in what was a typical first pre season game where the main focus for both sides was purely match fitness with John McGrath electing to field two different XI’s in each half. But a win is a win which will surely raise confidence ahead of the big test against Nigel Clough’s Burton Albion on Friday night.

The first chance of the game went the way of Sports as Evan Garnett was played through but he snatched at his chance as his effort went wide of the mark. Only a few minutes later a mistake at the back from the visitors as the keeper played the ball straight back out to John McGrath but as McGraths effort was about to cross the line the keeper did well to make up for this error and got down well to push the ball away for a corner. The resulting corner was then floated in McGrath but Trialist smashed the ball well over the bar and out for a goal kick.

The next slice of action came half way through the first half as Lewis Belgrave tried a half volley from 25 yards out but could not get hold of it and sliced the shot wide. Then Garnett tired his luck again who caught the ball well but his strike went narrowly wide of the post. A couple of minutes later Harley Kozluk managed to drive well down the right hand side and made his way into the box. Kozluk managed to cut the ball back to Belgrave whose effort was straight into the arms of the County keeper.

The visitors then had their first real chance of the match just before the half hour mark as a golden chance from the visitors’ young striker went just wide of the mark. Sports then won a free kick on the edge of the Notts County penalty area. New signing Nathan Jarman stepped up and unleashed a ferocious effort past the wall which curved just wide of the right hand post for a goal kick. On the next Sports attack Kozluk played a very clever ball inside to Curtis Burrows whose shot went high over the bar. Sports would then have two final chances before the half time break, both coming from Evan Garnett. First Garnett received the ball on the edge of the box and worked himself a chance but the effort was dragged harmlessly into the keeper’s body and saved well. A similar scenario occurred a minute later when Garnett struck the ball from distance outside the area but same outcome the keeper managed to get down and save the shot.  The final chance of the half went the way of the visitors with a few minutes to go as a good ball into the Sports penalty area found the County striker free inside the box but thankfully from a Sports point of view it went well wide of the goal.

The second half consisted of a new XI for Sports as new signing Niall Doran got his first run out in a Sports shirt, now sporting the brand new light blue away strip. There was four Trialists’ in this half with a some academy players in there too but familiar names to Sports fans were the likes of Kevin Grocott, Tom Burgin, Jake Scott, Tom Eccleshall, Jimmy Phillips, Will Norcross and Clinton Morrison.

It certainly didn’t take the second half team long to make an impact on the game, all of six minutes into the half and Sports had their first goal of pre season. It was young Tom Eccleshall at left back as he delivered a cross on the left hand side. The Notts County keeper managed to spill the ball in to the net as his near post and over the line for a rather bizarre first goal. The visitors then could have equalised instantly from kick off as a good quality free kick went narrowly over the bar.

Next a fantastic diving challenge from Eccleshall set Trialist who as he drove down the wing procured a great effort from the edge of the box but the County keeper did extremely well to get down and save it. It could easily have been 1-1 just after the hour mark as the County striker got a very lucky break but he fortunately couldn’t take his opportunity and only managed to hit the side netting from what was pretty much an open goal. A big let off for Sports but still they remained ahead. Niall Doran then showed how good he can be at taking set plays as a corner was delivered in very well only for Trialist to head over. Sports were pressing really well and they were rewarded when they won the ball back just inside the Notts area. Doran then turned well and had a strike on goal but again his effort was over the bar.

Then a moment for manager John McGrath to be proud of as his son, Jay, came on for the final 15 minutes, having been given special permission from Burton Albion Academy to get a run out in the game. Jay, who is only 15 years old, slotted into the left hand side of defence in place of goal scorer Eccleshall.

Notts County then had a chance just after the substitution as Trialist, the goalkeeper for Sports this half, makes a save with his face as the ball rebounded back to the striker he managed to somehow hit the bar from only a few yards out. Thankfully the effort was cleared away from danger and no harm was done but it was a real chance from County to grab a late equaliser.

The final chance of the game came four minutes before the end as Trialist playing up front for Sports got onto the end of a Kevin Grocott cross but the County keeper, who apart from his one mistake was having a great game, got down and saved superbly. That was the final effort of the game as a valuable 90 minutes for the whole side came to a conclusion. John McGrath would have been very happy with the first run out of pre season as all focus can now go onto the Burton Albion game on this coming Friday 13th July with a 7pm Kick Off.