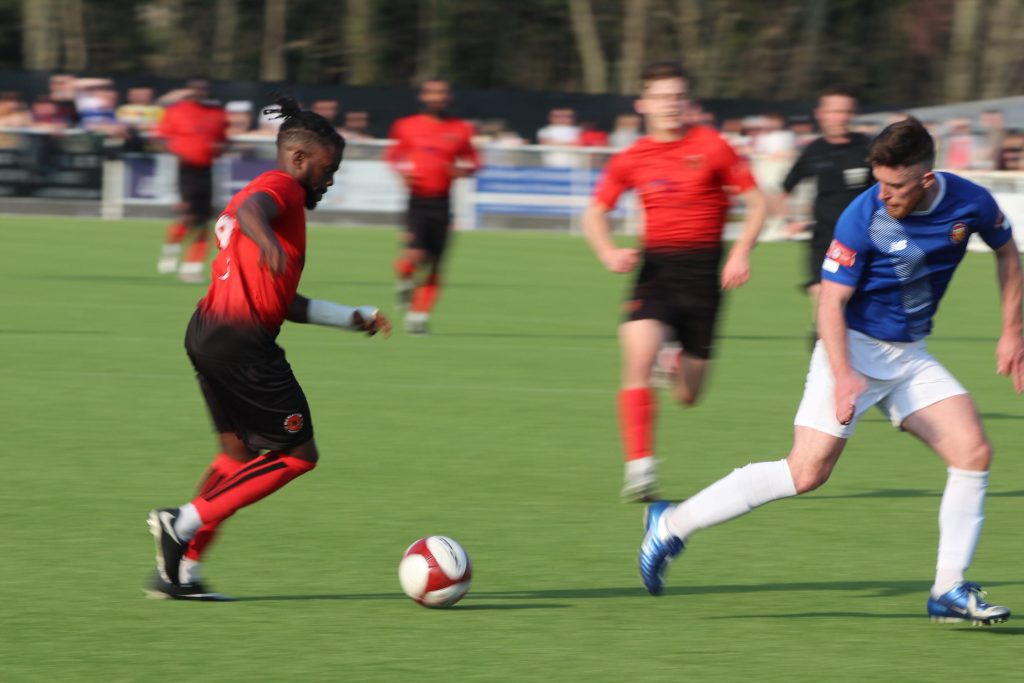 Having returned to winning ways after victories over Matlock and Stalybridge, hopes were high for a home result against visitors FC United too, with a seasons best attendance of 802.

It didn’t start well for Mickleover when after only three minutes Regan Linney opened the scoring for the visitors. The defence seemed to freeze on the right following a free kick, giving Linney both time and space to fire into Hedge’s left hand top corner, 0-1.

Three minutes later Mickleover had a chance which was to be their last for over 30 minutes. McDonald had found Dales but the resulting shot was an easy catch for keeper Dan Lavercombe.

FC United began to dictate the game, with Mickleover early venturing over the half-way line, apart from an attempted break from Dales which ended with a tackle just inside the FC United half.

A string of corners and free kicks failed to see a telling finish from the visitors however, before McDonald managed to break into the visitors box, only for the defence to clean up.

Agustien fired a long distance shot over the bar after 32 minutes, following a nice build up between Walker, Beavon and McDonald.

But as Mickleover finally started to break out, Milner put a nice ball through, which just failed to connect with Beavon and McDonald.

FC United had failed to maximise their supremacy over the first 30 minutes and were soon made to regret it, when Dales was tripped just inside the area and three referee pointed straight to the spot after 37 minutes.

McDonald stepped up to hit the ball and buried  it in the bottom left-hand corner of Lavercombe’s net, 1-1.

Now it was Mickleover pushing forward and only two minutes later McDonald had another shot blocked from close range, before Beavon layed off a perfect ball to Dales on the edge of the box, sending a perfect shot beyond Lavercombe’s reach to give Sports the lead after 42 minutes, 2-1.

FC had one more chance before the half time whistle, when a ball from Ennis crossed the face of the Mickleover goal and out for a goal kick.

But as in the first half the second didn’t get off to good start either. FC wasted a free kick and Agustien had received a yellow card, before Walker found Beavon, and Radcliffe had a weak shot saved.

But after 49 minutes Linney was fouled in the box by Mills, and Ennis made it 2-2 from the spot.

It could have been a third for the visitors three minutes later, but Hedge managed to tip over a Morris effort following a corner.

The pressure had begun to build again, but overall the Mickleover defence of Watt and Mills were looking solid, while Walker and Dolan were finding the space to push forward more.

After 54 minutes Beavon did well to take possession of a loose ball and played it out to Dales on his right. McDonald hadn’t been picked up by the defence, but Dales spotted him and the striker fired in his second of the game, before celebrating in his traditional acrobatic style, 3-2.

McDonald was looking for his hattrick but his 58th minute shot was blocked after being set up by Radcliffe. Linney then got a break for FC before the chasing Walker came to the rescue.

Agustien was having a much better second half and similarly Milner, as they were both able to push forward, with a much better feed to the strikers.

But a 59th minute corner caught out the home defence and Curtis Jones was able send a volley beyond Hedge’s reach 3-3.

It was still fairly even but Linney continued to look dangerous for FC. He outran the defence after 66 minutes, but Hedge saved his shot and three minutes later the Mickleover keeper was the saviour again, scrambling away Bange’s effort after a free kick.

The visitors went close again a after a further minute, before a  charge from Dolan found Milner, before Beavon had a shot blocked.

Davidson-Miller came on for McDonald but it was FC United’s sub Agnew trying his luck, with a cracking long distance shot just wide.

Fellow sub Galloway got space after 79 minutes but his shot was high and wide and then Milner had a good run blocked, before Radcliffe got a shot in.

It was so nearly a fourth for Mickleover too after 84 minutes, when Dolan floated in a ball from the left. It almost caught Lavercombe out, as at full stretch he fell backwards and landed on the line with the ball no more than inches from going over. It would have gone to VAR?

Three minutes and Milner broke through, but his shot was blocked and it was a late corner. Beavon got the ball in the net, but referee blew for a dubious foul.

Atwal came on for Radcliffe for the final shout and he was able to block and attempted break from FC’s Agnew.

But Mickleover were making the most of time added on and when Dales got another cross in, both Davidson-Miller and Milner were almost on the receiving end.

Atwal put in a late cross which almost found Dales head, before Beavon had a shot blocked from the resulting corner.

Niven made a late appearance for Beavon, but the final dramas came at the Mickleover end, when Watt deflected onto his post only for Walker to follow suit, as it remained 3-3.

It’s Bamber Bridge next away on Tuesday evening, with only six games left in the NPL season.