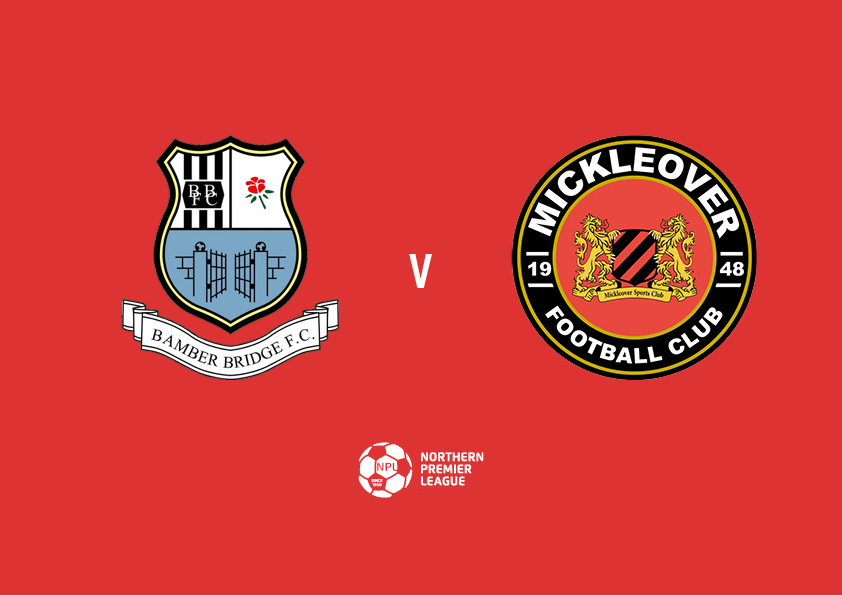 Tonight we visit Bamber Bridge in the previously postponed game. Our hosts are currently ninth in the table following their 1-0 victory at Basford last Saturday.

Back in September we went down 0-1 to Bamber when they visited the Don Amott Arena, so with the recent return to form and the point hard earned point against FC United last Saturday, hopes will be high for further success.

Our hosts at the Tom Finney Stadium started the season well but have dropped out of the play-off places during the second half of the season.

Unusually they have secured more points away from home than at home and have only secured eight points since New Year.

They have used over 20 players so far this season and have rarely fielded an unchanged team.

Let’s take a look at their squad.

Matthew Hudson is currently first choice goalkeeper, a loan signing from Preston North End. He has previously been loaned out to Bury and spent a month a Bamber Bridge back in 2020.

James Cottam is second choice keeper, a former Preston North End junior too, who was signed from Barnoldswick last October.

Former Blackpool junior left back Luke Higham made one first team appearance for the Seasiders. He had loans at Nuneaton and Telford before his release, after which he was at Fleetwood, with a further loan at FC United. He came to Bamber Bridge October 2020 from Lancaster and has recently had a spell at Marine.

Nathan Pond is a vastly experienced central defender, whose career began at Lancaster City in 2003. He then had seven years at Fleetwood including loans at Kendal Town and Grimsby, before joining Salford City in 2018.

After two years he moved on to Fylde and joined our hosts from Telford last October.

Midfielder Craig Carney was signed from Matlock in September. He started out at Lancaster, and has journeyed via Stockport, Marine, FC United and Warrington.

Chris Churchman is a midfielder who started out at Stockport. After a loan at Buxton he briefly joined Macclesfield, before stops at Connah’s Quay and Clitheroe and arrived at Bamber in July 2018 from Hyde.

He played in the Championship with Middlesbrough, Sheffield Utd and Watford, before moving to Bradford City, Oldham, Blackpool and Notts County, finally going non league with Eastleigh in 2017, after 500 senior appearances and over 50 goals. He came to Bamber from Fylde in September 2020 and is also a Republic of Ireland Under 21 International.

Left midfielder Isaac Sinclair is the son of well know ex Pro Trevor. He joined Bamber from Curzon Ashton in September 2020, and has also played for AFC Blackpool, Squires Gate and Longridge.

Winger Finley Sinclair-Smith is another Blackpool graduate. He had loan spells at Marine and Widnes before his release, moving on to Longridge Town. After almost two years at FC United, he signed for Bamber last September.

Defender Macauley Wilson was a junior at both Manchester Utd and Blackpool. He was first loaned to Bamber in 2016 and also to Fylde, until his release June 2017, when he became a permanent Bamber Bridge player. He also captains the side.

Right back Callum Spooner spent his earlier career with Bolton Wanderers. He was loaned to Stalybridge and joined Atherton on his release in in 2017 and has been with our hosts since October 2018.

Matty Thomson had five years at Chester before joining Bamber in October 2020. Primarily a right back, he started out at Tranmere.

Aaron Skinner arrived in November last year after a couple of years at Tottenham Hotspur. A centre back or midfielder he was also at Bury and Bolton Academies earlier in his career.

Sheldon Green is a striker who has alternated between Bamber and Fylde over the last few seasons. But last August he became a permanent Bamber Bridge player.

Jake Thompson is a recent signing from Ramsbottom. The striker started out at Huddersfield Town and has also played for Liversedge and scored on his Bamber Bridge.

Rhys Turner is a recent signing. He started out at Preston and Lancaster’s Academies before Oldham signed him from Stockport’s Academy and loaned him to York City, and Macclesfield, before he joined Morecambe on his release.

He was loaned to Stockport, moving on to Barrow and Stockport Town, before Bamber signed him from Lancaster. He scored six goals in his 66 appearances in leagues one and two.

Jacob Holland-Wilkinson is coming to the end of his loan from Preston North End. The young striker had also been loaned to Fylde.

Adam Dawson is a well-travelled winger who started at Bury, before moving to Wigan in 2012. He was loaned to Accrington and was with FC United and Barrow, before Leicester City signed him 2013.

After loans at Notts County, Nuneaton and Bristol Rovers, his release then found him at Kidderminster. Moving on to a loan at Tranmere, then Eastleigh and back to Tranmere. He was loaned to Darlington and then played at Telford and Macclesfield before a year in Cyprus with Achyronas Liopetriou. He then had a short stay at Radcliffe before arriving at Bamber Bridge in December.

Midfielder Paul Dawson arrived from Lancaster City in November, having previously been at Bamber Bridge a few years earlier after coming in from Kendal Town.

Dan Martin is another young loanee. The midfielder has been a regular starter during his time away from Accrington and has recently had his loan extended.

Sam Billington was a Liverpool, Junior before arriving at Bamber in 2020.

Bamber Bridge have recently taken three loanees. Kevin Spinelli is from Accrington, who also has a pre-Christmas spell at Radcliffe and on deadline day they took winger Jake Daniels and midfielder Joe Strawn from Blackpool’s youth team squad.