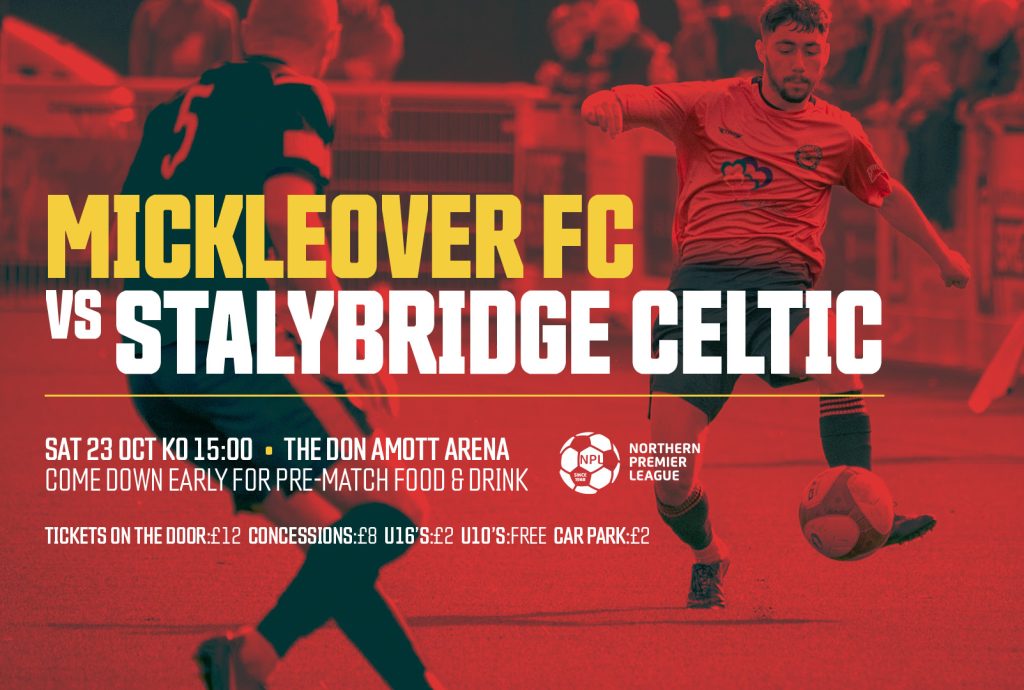 Following last Saturday’s first away win at Atherton Collieries, Mickleover will be looking to return to winning form at home too, with the visit of Stalybridge Celtic to the Don Amott Arena.

Like so many NPL teams, including ourselves, Stalybridge have had mixed fortunes this season. Having lost their first two matches they had a home win against Morpeth, before suffering two successive away defeats at Lancaster and Buxton.

A home win against Ashton, preceded defeats against Basford and Matlock, followed by the first of two away wins at Scarborough.

It was after a 1-0 defeat at Gainsborough that they had a run of four successive wins, beating FC United 5-2, Whitby away, Stafford at home and a 5-0 hammering of Grantham at home.

But the tide has turned again and they have lost their last two games against Warrington and Bamber Bridge and are currently 11th in the table with seven wins and nine defeats, on 21 points, five ahead of Mickleover.

So let’s take a look at their team. Current first choice goalkeeper is former Leeds United Academy player Will Huffer. He made one first appearance at Elland Road and two more league starts while on loan at Barnet. But following his release last summer after 13 years, he initially joined Bradford PA, before moving onto Bradford City, where he stayed until June this year.

He joined Stalybridge earlier this month and played for England at Under 17, 18 and 20 levels.

Second choice keeper Jahquil Hill was only signed this month too. The Bermudan international started out at FC United before joining Mansfield Town in 2013. He moved on to Ilkeston, Stafford Rangers and Rushall Olympic and was due to play for Oakville Blue Devils in Canada, before opting to stay in the UK with Hereford.

After going back to Stafford for a season, he returned to Bermuda with Robin Hood, and then came back to the UK during the summer.

Right back Dougie Nyaupembe was a Bury youth team player, who made the first team twice. He was loaned to Hyde and Stalybridge, before a short stay at Prescot and a permanent move to Atherton 2019. He joined Radcliffe in January 2020 and came to Stalybridge in pre-season.

Ashley Smith-Brown is another full back who had 17 years on Manchester City’s books. He never made the first team, but gained valuable experience on loan at NAC Breda where he played 30 games, Hearts and Oxford.

He moved to Plymouth in 2018 playing 36 matches, but after a loan at Oldham he was released and signed for Farsley Celtic. He was also capped by England at under 16,17,18,19 and 20 levels.

Defender or midfielder Sam Wedgbury was signed by Sheffield United a teenager, having been spotted playing for Worcester City. He didn’t get a first team start but was loaned to Mansfield and Ferencvaros, where he played 17 games and scored two goals for the Hungarian side.

After his release from the Blades he joined Macclesfield, then in league two and after three years and 100 games plus a loan at Altrincham, he was on the move again to Stevenage for one season.

Connor O’Grady is a defender who started his career at Sheffield Wednesday. He made two appearances for the Owls before his release in 2019, from where he joined Buxton and came to Stalybridge in June this year.

Keenan Quansah is a defender or midfielder who came through the ranks at Accrington Stanley. Following his release he spent three months with Burscough, moving on to Mossley and Hyde Utd. He came to Stalybridge pre-season after nearly three years at Glossop North End.

Winger Jay Fitzmartin is currently on loan from Bolton Wanderers, who he joined from local football as an 11 year old. He has made one team appearance at Bolton.

Charley Doyle is a midfielder or centre back who came to Stalybridge September last year, after 13 years coming through the ranks at Blackburn Rovers.

Midfielder Marcus Dackers is the clubs leading scorer with five goals. The Welsh Youth International played his youth football at Manchester City and Brighton. He was released from Brighton in July after a loan spell at Lancing, joining Salford City from where he is currently on loan.

Ethan Padden is a midfielder who came to Stalybridge from Buxton during the summer. He was a youth player at Chesterfield, before a move to Glossop North End preceded his stay at Buxton.

Justin Johnson is a well travelled winger who joined Stalybridge in September. In his youth he started at Sparta Rotterdam, before joining Manchester Utd. Moving on to FC United he then joined Dundee Utd, from where he had a short loan spell at York City.

Othellos Athienou in Cyprus was his next stop, plus a loan at Akritas Chlorakas. Back in Scotland he was at Hamilton Academicals, before coming to Stalybridge from Greenock Morton.

Right back Josh Dawodu is currently on loan from Sheffield Wednesday until November. He joined the Owls in 2017, after playing his earlier youth football at Arsenal.

Shane Killock is a defender who started out at Osset, before joining Huddersfield Town. He made one first team appearance for the Terriers, before being loaned to Hyde and Harrogate. He then had another loan at Oxford before a permanent move in 2009. He then moved on to Telford, where he made over 130 appearances and captained the side. Harrogate, Guiseley on loan, Hyde, Bradford PA and Boston Utd followed, and after spending a season at Alfreton he signed for Buxton, then came to Stalybridge in June.

Stephen Brogan is both experienced and a play anywhere utility player, capped by England as a C International. He made 76 appearances for Rotherham Utd in Leagues One and two, before joining Stalybridge on loan in 2007.

After a short spell at Alfreton he came back to Stalybridge, then moved to Guiseley, Forest Green Rovers and Southport. A brief return to Stalybridge in 2015 then preceded spells at Gainsborough, North Ferriby, Boston Utd and Spennymoor, before a fourth spell at Stalybridge after he was signed from Buxton.

Jake Burton is a young striker currently on loan from Tranmere Rovers. He had made five appearances for Tranmere and returns to his host after this weekend.

Scott Bakkor is a striker signed from Skelmersdale in 2018. He has also played for Colwyn Bay. Marine, Witton Albion and Curzon Ashton.

Republic of Ireland International Stephen O’Halloran is also the clubs assistant manager. A massively experienced player who started out at Aston Villa, then Wycombe, Southampton, Leeds Utd, Swansea, Coventry and Carlisle, before moving into no league with Nuneaton in 2012.

Further moves have taken him to Stockport, Salford and FC United, before arriving at Stalybridge in July 2019.