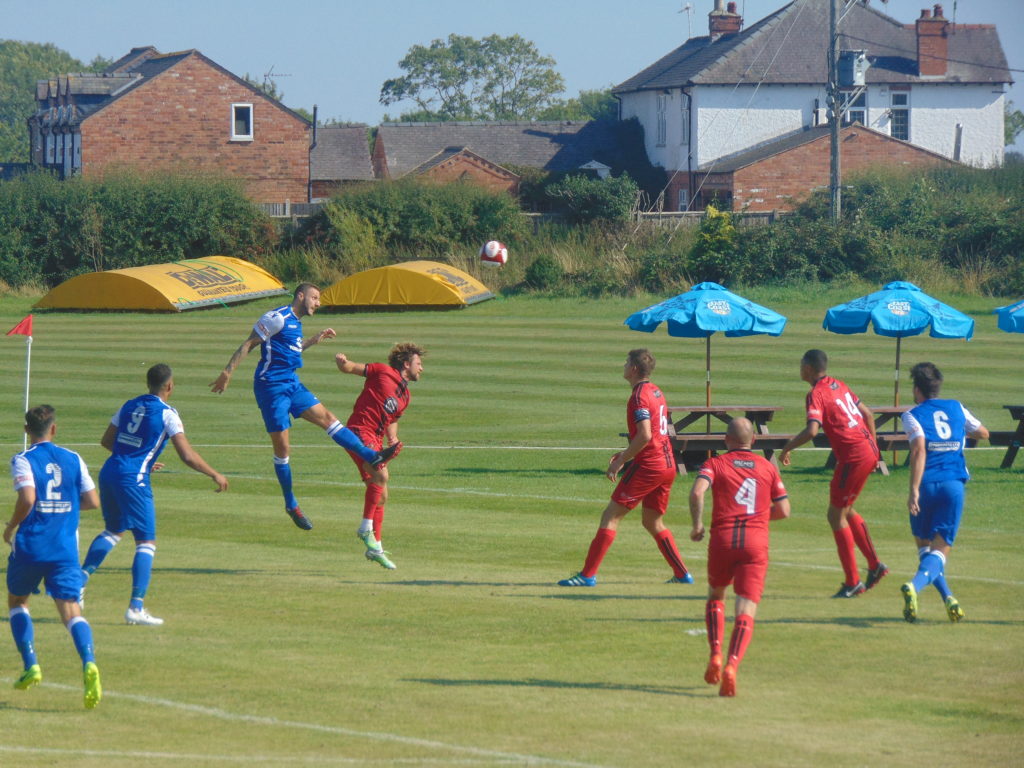 A day to forget at the Don Amott Arena as a controversial decision by the match referee payed a big part in Sports falling to their first home loss to Buxton FC, going down 3-1. After a scrappy first half Buxton took the lead in the few minutes of the second half through Bradley Roscoe. Evan Garnett got a superb equaliser for Sports before a Nico DeGirolamo goal which was originally given as offside by the linesman was overturned by the referee to put the Bucks back infront. A late Jude Oyibo third wrapped the points up for the Bucks as Sports pressed to get a point but the injustice of the Bucks second goal will be the talking point from a very physical Derbyshire Derby.

Sports were able to welcome back Tom Burgin, Jake Scott and Nathan Jarman into the starting lineup after the trio missed the game at Stafford Rangers through injury. The lineup consisted Lewis King in goal with a back four of Kevin Grocott, Pablo Mills, Tom Burgin and Ben Turner. The midfield trio of John McGrath, Jake Scott and Mason Warren were behind the attacking three of Oliver Roberts, Nathan Jarman and Evan Garnett. On the bench for Sports were Curtis Burrows, Tyreece Robinson, Isai Marselia, Jimmy Phillips and Will Norcross.

There were plenty of hard challenges and tackles flying in for the first 10 minutes as the tone of the game was set. But Garnett had a chance to score after he was played in over the top by Roberts before forcing a save from Buxton keeper Theo Roberts. Pablo Mills had to be taken off on 16 minutes with that looked like a dislocated shoulder again after another heavy challenge from the visitors; he was replaced by the young Tyreece Robinson. For the action off the ball there was little on it in terms of chances as each side would only have one more concreate effort each before the half time break. First Buxton’s Garry Gee fired a fantastic volley straight into the chest of King with almighty power but the Sports keepers did well to hold the ball in his arms. Finally a Nathan Jarman free kick was tipped over the bar by the keeper as it looked like it was going in to round off the minimal first half chances.

Within two minutes of the game restarting Sports were forced into another forced change as yet again Buxton took out Kevin Grocott who was unable to continue and was subbed at right back for Curtis Burrows. Soon after the Bucks were ahead. A corner ball from the far side was headed in after a rebounded effort was cleared. Lewis King tired his best to keep the ball from going in over the line but despite his best effort it wasn’t enough as the ball crossed the line. Another great save from King kept the Bucks from making it to then a long range free kick from Roberts from a very long way out was on target as the Bucks keeper palmed the effort away for a corner.

Then on the 71st minute Sports effort were rewarded with an equaliser. The ball was played in from the left to Garnett who cut inside on his right a few times before driving an effort into the bottom right corner which left the Buxton keeper rooted to the spot. But just when it looked like Sports were in the ascendency the Bucks scored the controversial goal that would give them the win. A free kick was played in and as Lewis King went to punch it away he missed it. The ball was the headed back into the danger area and as Nico DeGirolamo tapped the ball in from close range the assistant referee flagged for offside. But after a conversation with the referee the man in the middle overturned the assistant’s decision and awarded the goal. Analysis later on proved the assistant referee had made the right call thus meaning the Sports player’s protests were justified.

This was a real setback for John McGrath and his Sport side who has they tried to press and grab another goal to equalize Buxton broke on the counter to make it 3-1 in the final minute. Jude Oyibo went on a darting run dribbling up the field and his strike beat King as his near post in the bottom left corner to seal the win for the visitors. A tough one to take all round for Sports but unfortunately as we know these things are very common in football, sometime they go for you and sometimes they don’t. Sports will now move on very quickly as they travel to another tough test in Lincolnshire to Grantham Town on Tuesday 4th September, 7:45pm Kick Off.