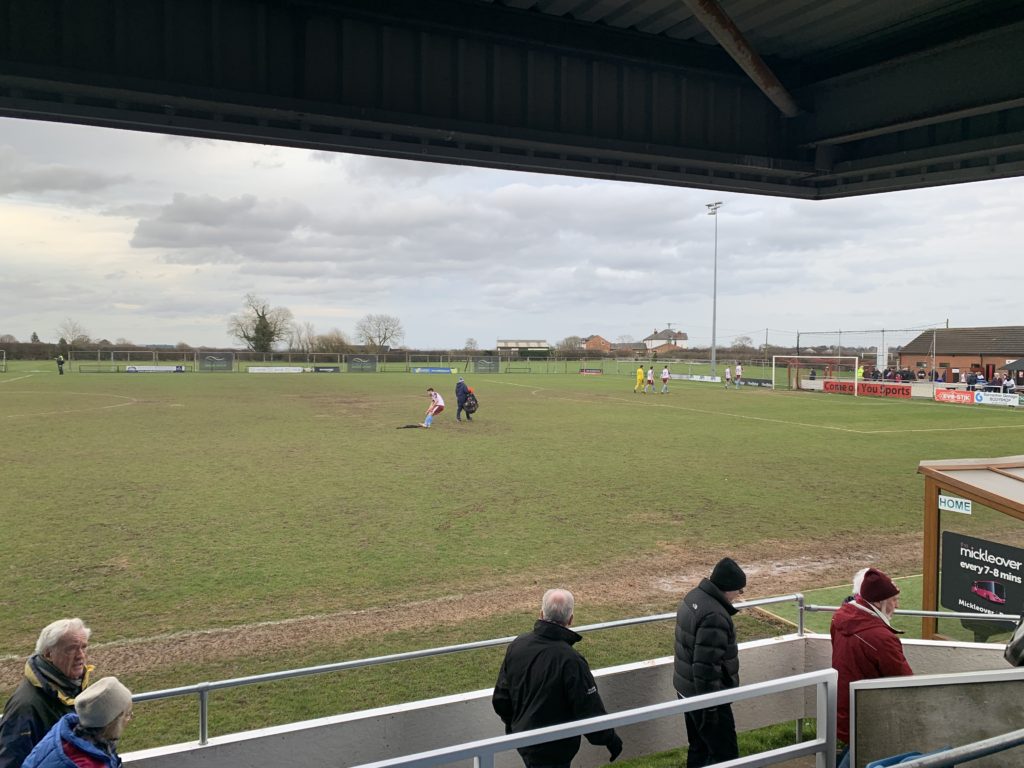 After last week’s disappointing result, Sports came into this game fighting to survive relegation. Sports boss John McGrath put out a difficult but good 4-4-2 formation with Lewis King in goal. The back four consisted of Karel Tvaroh, Durrell Berry, Ben Turner and Mason Warren. The midfield consisted of John McGrath, Ricky Ravenhill, Jake Scott and Shaquille McDonald. The two front strikers consisted of Nathan Jarman and Levi Amantchi. The bench consisted of Adam Prusa, Tomas Junek, Evan Garnett, Jiri Boula and Jimmy Phillips.
First half commenced and for the first 7 minutes, Mickleover did do well to keep South Shields from scoring but on the 8th minute, goal came for South Shields. Craig Baxter had plenty of time and space to take the ball down and struck it down low past Lewis King and in the bottom left corner of the goal. Two minutes later, chance came for Sports. Sports first chance saw Levi Amantchi turn and he struck the ball over the bar for a South Shields goal kick. On the 12th minute, another chance came for Sports. A long ball over the top found Shaquille McDonald but his second touch was sent wide and over the goal for another South Shields goal kick. During the 12th to the 21st minute, South Shields has the most chances to go another goal up, but Lewis King did well to keep the score at 1-0. On the 22nd minute, a huge chance came for South Shields. David Foley had a golden chance to make it 2-0 up with a huge amount of space inside the six-yard box but his shot was sent over the bar. On the 25th minute, another huge chance came for South Shields and a big let off for Sports as South Shields were awarded a free kick. Robert Briggs sent the long-range free kick, but his shot hit the post of the goal. A minute later, goal came for South Shields. They got their second with Blair Adams who struck his effort from 25 yards and did not look to trouble Lewis King but only using one hand to keep it out, Ben Harmison came in and tapped it into the bottom left corner to give South Shields the lead.

Second half commenced and Sports made their first substitution with Tomas Junek replacing Levi Amantchi. For the first 12 minutes of the second half, both sides did have some good chances but unfortunately too short and sweet to comment as each side defended well to keep it at a low level. On the 58th minute and another goal came for South Shields. A cross came into the box and, completely unmarked, Ben Harmison came and tapped it into the bottom left corner. During the 59th minute and the 65th minute, Sports were dominate but with the strength of the South Shields team, regained possession. On the 66th minute, Sports made another substitution with Jimmy Phillips replacing John McGrath. On the 68th minute, huge chance came for Sports with Jimmy Phillips shot saved well by South Shields captain Jon Shaw. On the 75th minute, Sports made their final substitution which saw Adam Prusa replacing Shaquille McDonald.
On the 81st minute, a light was at the end of the tunnel as a goal came for Sports. Tomas Junek scored from just inside the area with his left foot after a big deflection by South Shields and went past the keeper for Sports to get a goal. On the 89th minute, huge chance came for Sports. An excellent free kick by Mason Warren so the ball goes out for a Sports corner. Mason Warren took the corner and could have gone in with a good header by Durrell Berry but goes over the bar for a South Shields goal kick. During the four minutes of added time, Mickleover had the most chance to get another goal with a corner awarded to them. Mason Warren took the corner but due to pure strength of South Shields, the corner was cleared away. South Shields almost had a chance with Phillip Turnbull 1v2 with Durrell Berry and Lewis King but Lewis King managed to get the hands on it to throw it out.