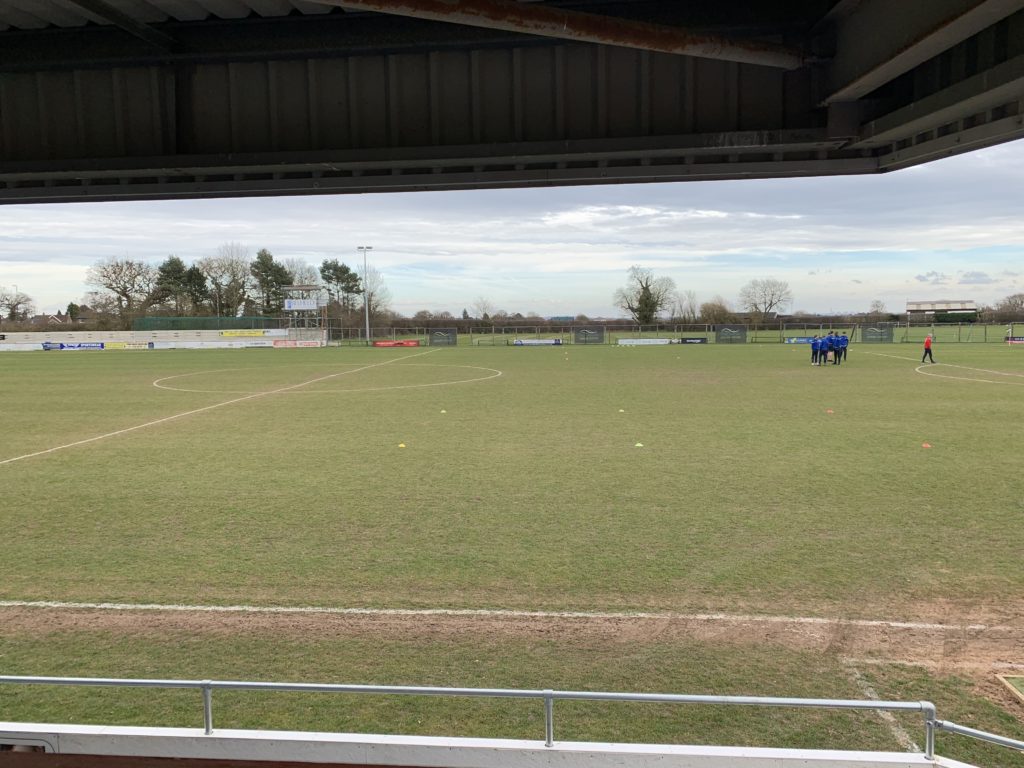 After last Saturday’s successful victory away at play-off contenders Scarborough Athletic, Sports came into this game hoping to continue the season with winning ways at home against promotion contenders Warrington Town. Sports manager John McGrath put out a good 4-4-2 formation with Lewis King in goal. The back four consisted of Durrell Berry, Pablo Mills, Ryan Cresswell and Ben Turner. The midfield four consisted of Karel Tvaroh, Ricky Ravenhill, Jake Scott and Tomas Junek. The two front strikers consisted of Evan Garnett and Levi Amantchi. The bench consisted of Will Norcross, Mason Warren, Kyle Carey, Jimmy Phillips and Adam Prusa.
First half commenced and in the first three minutes, a goal came for Warrington. A long ball forward was headed on by Bohan Dixon to Tony Gray to turn and lobbed the ball over Lewis King into the goal to give Warrington the lead. On the 10th minute, a chance came for Warrington. Robert Evans had a shot from outside the box, but the ball goes out wide of the left-hand post. On the 20th minute, another chance came for Warrington. A shot from Dylan Vassallo to Tony Gray went too far and out wide of the left-hand post. On the 32nd minute, another chance came for Warrington. A ball from Dylan Vassallo again to Jack Mackreth gave him options but unfortunately chose the wrong option and Pablo Mills was there to block his chance for goal. Three minutes later and Warrington had another chance to score. Mark Roberts made an important interception for Warrington but Sports gain repossession of the ball and into their box and has a chance themselves but goes straight out for a Warrington goal kick. On the 42nd minute Warrington score again. Ben Turner was beaten on the by-line by Jack Mackreth and his cross came in and Dylan Vassallo kicked it into the bottom left corner from a yard out.

Second half commenced and Sports made a substitution with Ryan Cresswell coming off and replaced by Mason Warren. On the 52nd minute, chance came for Warrington. Lewis King scuffed a clearance and got away with it with Tony Gray gaining possession off the ball. Tony Gray took a shot but was held up for Lewis King to get his hands on it. On the 53rd minute, goal came for Sports. Warrington failed to clear the ball out of the box and Evan Garnett managed to dink his shot under Warrington keeper Anthony McMillan and gave Sports a lifeline in the game. Three minutes later and Warrington got another goal after the referee awarded Warrington with a penalty due to Tony Gray going down in the box. Jack Mackreth took the penalty and put it into the top left corner for Warrington to regain their two-goal lead. On the 55th minute, chance came for Warrington. Excellent play from Dylan Vassallo, Tony Gray and Robert Evans who goes for a shot but was flagged offside. On the 69th minute, Warrington score again. Bohan Dixon created time and space in midfield and passed sharply to Robert Evans who turned and fired a shot into the bottom corner for Warrington to take all three points. On the 79th minute, Sports made another substitution with Will Norcross replacing Evan Garnett. Three minutes later and Sports made their final substitution with Jimmy Phillips coming on for Ricky Ravenhill. Throughout the final ten minutes of the game, Warrington were the team with the most chances, but all saved well by the Sports defence and Sports keeper Lewis King.