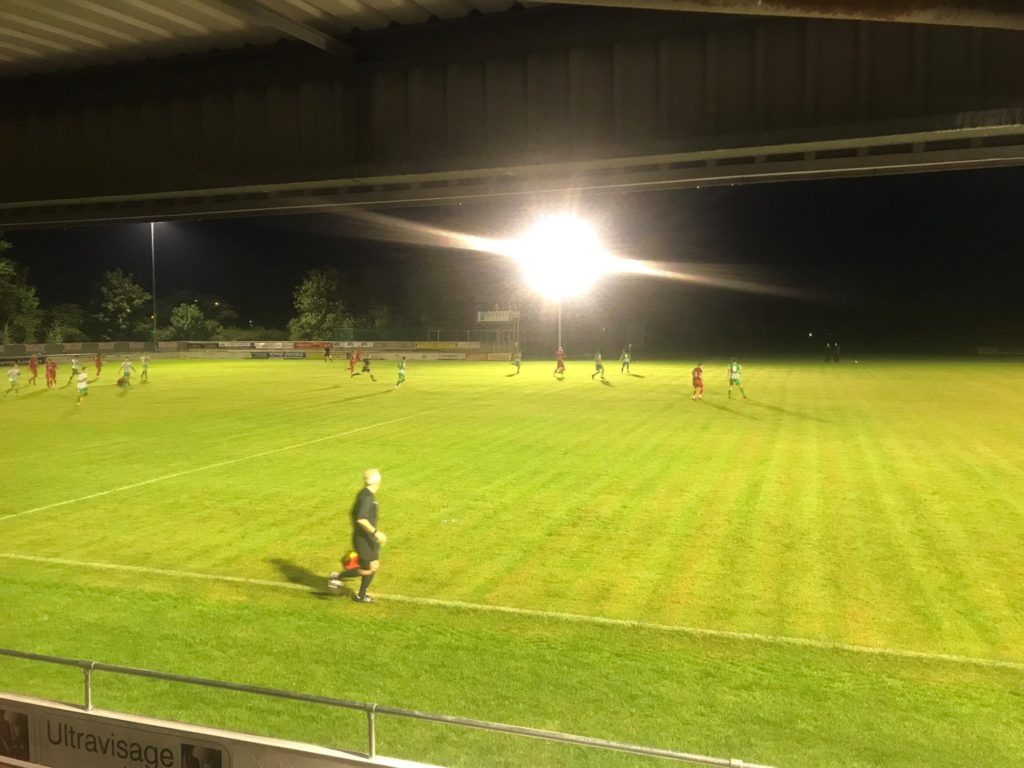 Mickleover Sports kicked of their home campaign in the league with three points as they registered a 3-2 victory over relegated Humberside team North Ferriby United. After not registering a goal in their first two opening games two game in eight first half minutes by former Derby and Rotherham defender Pablo Mills, the first of which was a peach of a screamer. Evan Garnett extended the lead to three early in the second half, notching his first of the campaign. What looked like an easy win then turned into a nervous finish as two late goals from Ferriby threatened to throw all the hard work down the drain. But the resolute Sports managed to withhold the away side’s onslaught to register the first three points of the season.

Four changes were made to the side that lost 2-0 at Gainsborough on Tuesday night. In came Kevin Grocott, Tyreece Robinson, John McGrath and Mason Warren for Tom Burgin, Niall Doran, Jimmy Phillips and Jake Scott. Doran and Phillips dropped to the bench alongside Will Norcross, Isai Marselia and Lewis Belgrave.

North Ferriby had the first chance as Harrison had an early strike saved by King. Roberts then had Sports first chance as a half volley from outside the box went wide of the left hand post. After a succession of corners from the home side the end product resulted in McGrath picking out Mills who headed wide. Next a long range effort from North Ferriby took an awkward bounce infront of King but the Sports keeper watched the ball all the way into his waiting gloves to save it well.

McGrath then sent a free kick wide of the right hand post before new signing Mason Warren let fly from quite some distance which looked destined for the top right corner but was somehow fantastically saved from Ferriby keeper Exall. But it was the next long range effort which had everyone on their feet in amazement as Sports took the lead. A ball came out to Pablo Mills who must have been a good 35-40 yards out and let rip an incredibly powerful strike which came past the keeper and into top right corner.

Sports then hit the post twice in the space of three minutes as both Evan Garentt and Nathan Jarman, from a free kick, smacked the bottom left hand post which could have extended Sports lead. But that man Mills was at it again as the Sports defender got onto the end of a Roberts free kick from the left hand side and smashed a low effort from inside the box into the bottom left corner. The last chance of the first half saw Ferriby midfielder Dan Norton head wide from a cross which saw Sports go into the break 2-0 ahead.

Within nine second half minutes Sports looked to have killed the game with a third goal. Evan Garnett was played in behind the back four and showed great composure to strike a low driven effort under the Ferriby keeper and into the bottom left corner. North Ferriby then made personnel and a tactical change to try and get back into the game which saw a spell of pressure end with a Lamplough effort being fired wide of the left hand post. After two chances from Roberts and Warren came and went Ferriby got themselves a goal back as a cross into the box was met by Dan Norton to head past King and into the net.

Sports made their one and only substitute as boss John McGrath took himself off for the experienced Jimmy Phillips. After another spell of North Ferriby pressure they got another goal back to make it a nervy last few minutes. This time it was James Williamson who struck to pull the gap down to the one goal. Things started to get heated up with Ferriby desperately trying to get a goal back to equalize. Bookings were picked up for Burrows and King as well as Luke Lofts for the visitors after a scuffle which was sperated by the referee.

Despite the onslaught from the visitors it was Sports who had the final two chances of the game. Evan Garnett sprinted away to hit the side netting before Jarman broke away to cross for Roberts but the midfielder couldn’t quite get onto the end of the cross. Phillips was booked for kicking the ball away in the last minute but it mattered little as the referee blew for full time to the relief of all associated with Sports who can now build on the confidence the win will bring as return to action on Bank Holiday Monday as they travel to Stafford Rangers (27th August) for a 3pm Kick Off.