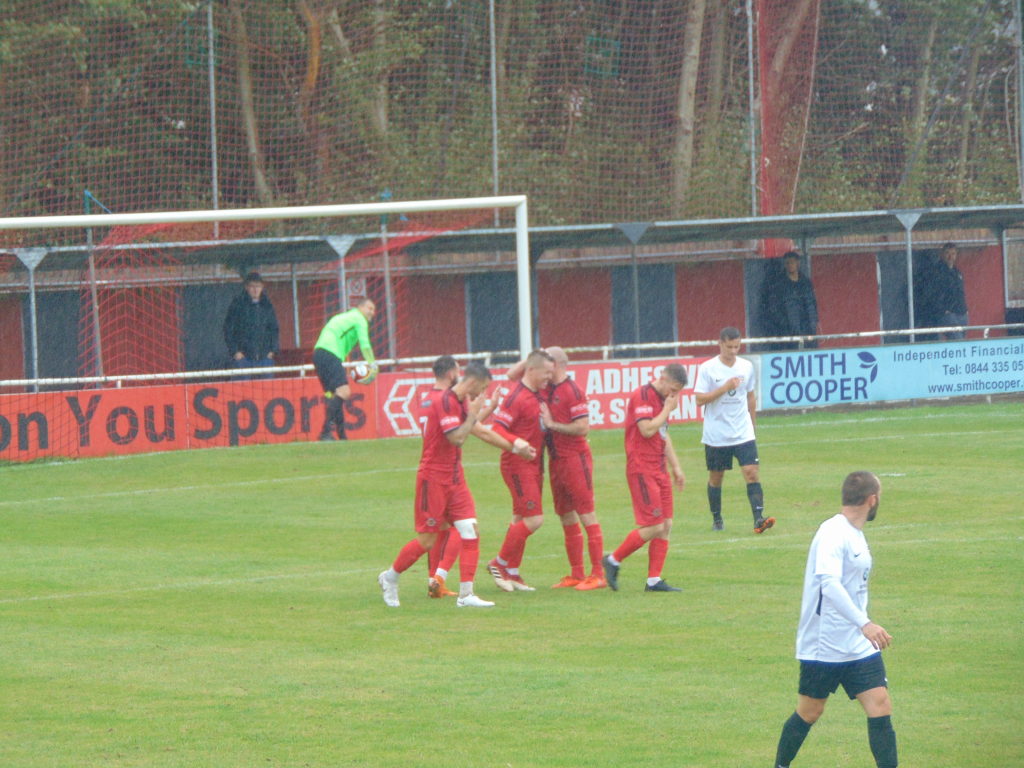 Mickleover Sports began their FA Cup journey with a home tie against West Midlands (Regional) League side Haughmond. Sports manager John McGrath put out a strong side with Lewis King in goal, with the back four of Jake Scott and Ben Turner as the left and right back defenders and Tom Burgin and Tyreece Robinson in the centre of defence, the four midfielders of Oliver Roberts, Jimmy Phillips, Curtis Burrows and John McGrath with Nathan Jarman and Evan Garnett as the front two strikers. On the bench were Isa Marselia, Mason Warren, Clinton Morrison, Jack Walsh, Will Norcross, Lewis Belgrave and Harley Kozluk.

It was a fantastic start for Mickleover in the 2nd minute as a corner was dummied by Oliver Roberts which then fell to Nathan Jarman who struck it in the right corner of the goal to give Sports the lead. Nathan Jarman was back on the ball in the 7th minute with a brilliant ball from Jimmy Phillips to Jarman who then struck it past Haughmond’s goalkeeper Sam Jones into the bottom right corner of the goal making the score 2-0. It didn’t stop there as Mickleover was 3-0 up by 9 minutes thanks to attacking midfielder Jimmy Phillips that got past Haughmond’s defence and fired the ball into the bottom left corner.
For 15 minutes, Haughmond had quite a few chances to get on the scoreboard but Sports defence and Sports goalkeeper Lewis King prevented them from getting back into the game. On the 12th Minute, a shot from Haughmond’s Harry Morris got Lewis up and performed a fantastic save by tipping the ball onto the bar and caught the ball on the rebound. Evan Garnett almost made it 4-0 but Jones was there to save it and the defenders cleared the ball.
But it was 4-0 on the 22nd minute and Nathan Jarman bagged his first hatrick in a Sports shirt. A fantastic cross from midfielder Jake Scott gave Jarman the opportunity to score a third with his head and went pass Jones and into the right side of the goal. A free kick from John McGrath could have made it 5-0 but the ball went out wide of the right hand post. Burrows and Roberts also had a chance to score but on both occasions were near misses with Burrows shot saved by Jones and Roberts shot going out wide of the right hand post.

The 5th goal did come for Sports on the 39th minute with Evan Garnett having the ball and Garnett sending Curtis Burrows through to beat the offside trap and slot past Jones. Before the half time whistle, Haughmond had another shot at getting on the scoreboard but their strike hit the bar once again. This was a warning for Sports but the whistle blew. Half Time, Mickleover Sports 5-0 Haughmond.

Second half commenced and Sports made two changes. Nathan Jarman and John McGrath came off and were replaced by Will Norcross and Isa Marselia. It started off with the Sports and the Mond producing chance after chance starting with a 47th minute chance from Sports Striker Isa Marselia as he fed the ball to Evan Garnett and Garnett had a shot which went out wide of the left hand post. A minute later, Haughmond had a shot but is fired over the bar and then had a second chance on the 50th minute which saw the ball go into the net but is then flagged offside. For 13 minutes of the game, chances came from the Mond with Sports giving away a free kick. Harry Morris takes the free kick but is saved by Sports goalkeeper Lewis King. Mickleover had more chances with Marselia feeding Phillips who turns and fires the ball into Jones’ hand and Norcross firing the ball to volley over the bar. Sports make their last substitution on the 72nd with Curtis burrows coming off and the debut of Academy player Harley Kozluk.

Haughmond once again have another shot from Kevin Renshaw who forces King into a wonderful save and Harry Morris’ shot went out wide of the goal post. Mickleover score again in the 78th minute with Isa getting on the goal tally. Isa Marselia was 1v1 with Jones and goes past him to hit the ball into the net and score his first goal for the Sports. A big chance for Norcross could have made it 7 but it goes out wide which then gives Haughmond the opportunity to score but the ball went over the bar thanks to a wonderful save from Lewis King.

Full Time and it ended Mickleover Sports 6-0 Haughmond. A fantastic match overall and the Sports are in the hat for the 2nd Qualifying Round.