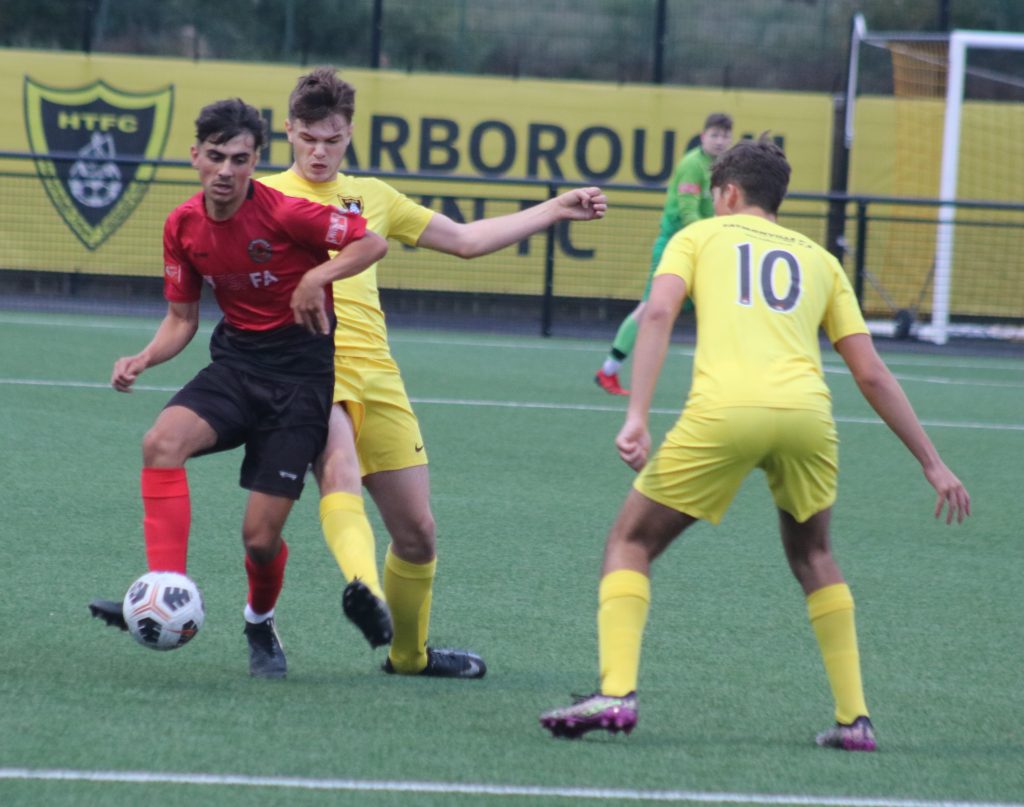 It was a trip down the M1 last night for Mickleover’s youngsters, as they faced Harborough Town in the FA Youth Cup.

It could barely have started worse for Mickleover as some poor defending led to the opening goal just over a minute into the game. Leighton had lost out on the right and with no one backing him up, it was a free shot for the Harborough striker 0-1.

Mickleover were soon retaliating and only three minutes later Ferron had his first of many telling runs down the left, sent his cross into a crowded box and Brown made it 1-1.

Ferron tried another run and had also broken through the Harborough ranks before his run was intercepted.

After eight minutes it was Ferron causing havoc yet again, when his own shot hit the bar. Brown was quick to head in a rebound, but the keeper had it covered.

Both Leighton and Ferron continued to cause problems on the wings, with Bonser and Rock holding back as Mickleover’s last line of defence.

Bonser had a push forward after 11 minutes, finding Ryder who shot wide and then a long ball found Leighton on the right, who was tripped on the edge of the box.

Atwal’s free kick was blocked and Harborough made a break, prompting Bill to charge off his line to clear the danger.

20 minutes in and Harborough caught the Mickleover defence napping again, after their own initial attack. With Bill beaten it was the underside of the bar that saved us.

Only a minute later Bonser pushed one of the host strikers to the floor in the box and the referee pointed straight to the spot. But Bill made a diving save to his right to keep it at 1-1.

Brown then went close for Mickleover, he took the ball around the advancing keeper, but was unlucky when his shot hit a defender.

It was end to end though as when Horleston lost possession in the middle, another Harborough break brought Bill off his line to save.

Leighton was then fouled again on the halfway line, before Rock came upfield and was just wide with a header from an Atwal corner.

But after 39 minutes the Mickleover defence was split down the middle and the home striker headed straight for goal, leaving Bill no chance, 1-2.

There was another shambolic mix up after a poor clearance, but Bill was able to make the save again with his legs.

In the final minutes of the first half, Parr tried a long shot which went out for corner, but then Ironmonger went down injured and had to be replaced by Sandu.

Mickleover started the second half strongly and continued to use both wings positively, but the home defence continued to look fairly solid.

Rock was then beaten for pace and the ball was sent goalwards, before another poor clearance fell kindly for Harborough to make it 1-3 after 52 minutes.

Mickleover replied again two minutes later when Horleston got on the end of an Atwal free kick 2-3.

As Sports started to push for the equaliser Ryder had a shot wide, while Ferron continued to cause grief for the Harborough right back.

But the hosts continued to be quick on the break and had another long range shot over the bar after 65 minutes.

McKeever-Atkins then came on for Brown, before Ferron had another shot just wide.

With 11 minutes on the clock Ferron had made it to the left hand line to put a cross into the middle, right at McKeever-Atkins feet, but the young sub failed to get a shot in.

With Potts on for Ryder Mickleover earned a corner, but as the ball was crossed everyone missed it.

It was virtually the final minute of the game when Ferron again got a fine across into the box. For a moment the keeper looked as if he was about to collect it, but after a fumble he allowed McKeever-Atkins to connect and it was 3-3.

With the final whistle soon following, it was straight into a penalty shoot out with Harborough to go first.

The last time we had penalties in a Youth Cup tie was at Basford two years ago and we missed every one!

Although Bill was sent the wrong way for the first kick, it was wide of the post and with the young keeper making a great save from the second kick, it was going Mickleover’s way with Atwal and Bonser both netting.

But Horleston’s kick was then saved and although Harborough scored with their remaining kicks, Sandhu had scored for Mickleover before Leighton sealed the victory.