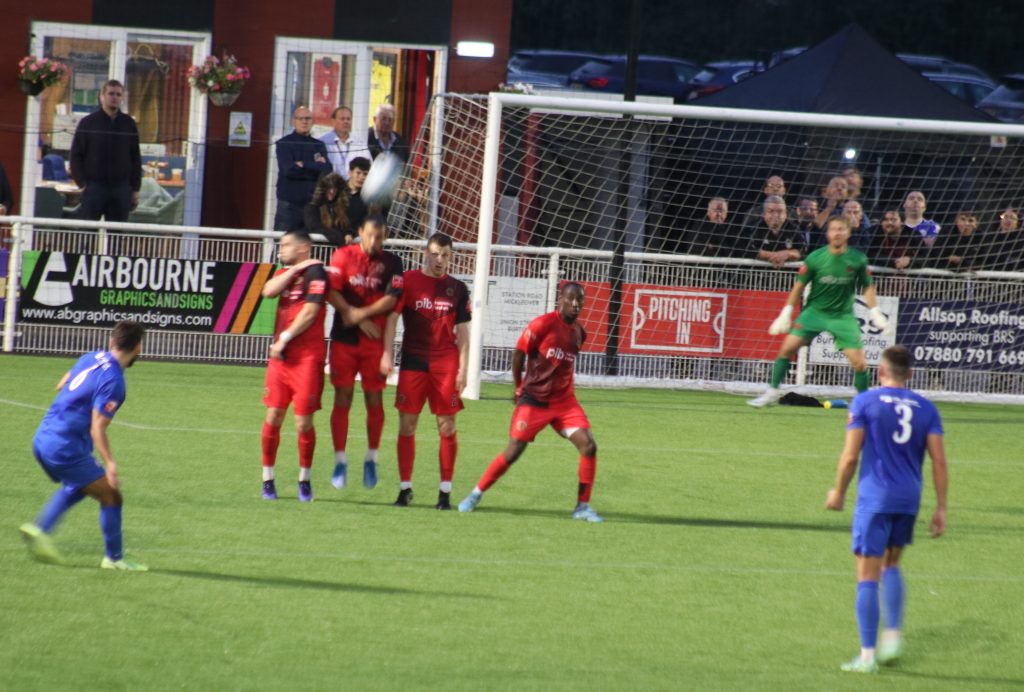 Two second half goals finally put pay to Mickleover hopes of a first win of the season, as table topping Coalville Town returned home as 4-2 victors.

Mickleover opened the game fairly strongly with Dales on his first run down the left, before his pass just failed to connect with Marshall, as keeper Paul White intercepted after three minutes.

Elliot Putnam then ran in from the left to fire a shot over the Mickleover bar, before Tom McGlinchey followed up for the visitors a minute later.

Dales was tripped just outside the box on another run after eight minutes, but he was soon on the attack again with another cross intercepted before it reached Marshall.

The 13th minute proved to be unlucky for Mickleover though, when Hedge saved a McGlinchey shot, only for the rebound to hit Butler and it was into the net, 0-1.

Fankwe was trying to be creative in midfield and managed to set Dolan on a run, but the visitors defence had it covered.

There was some positive play from Mickleover down the right and as the ball came into the box, Chettle couldn’t quite connect for a shot on goal.

Doyle-Charles had another shot blocked, but Coalville were looking much the stronger as Mickleover seemed to be lacking ideas, particularly in midfield.

Wilson shot wide for Coalville after 24 minutes and Dolan had another long solo run, which ended with Chettle firing a shot over the bar.

Mickleover skipper Watt was in the firing line with referee after pulling back Chambers, having already been booked earlier.

The resulting free kick stopped hopes of a comeback when after 32 minutes Andi Thanoj put his kick beyond Hedge’s reach into his top left-hand corner. 0-2.

Five minutes later and the fight back started with Marshall charging down the right to get a cross in. The keeper almost collected but it was just out of reach and Dolan fired in from close range 1-2.

Marshall was on another charge within minutes, firing another cross from the right, Dolan was there again too but just failed to connect.

Almost on half time Dales brought it back to 2-2, when he collected from a mix up on the left, outpacing the remaining defender he then cut in to shoot past White.

There were no changes for Mickleover as the second half got under way, and Marshall had an early chance, but his shot was straight at the keeper after a good build up down the left.

Putnam then responded with a wild shot over the bar, before Coalville made it 2-3 after 55 minutes.  Fankwe had lost possession in the middle and Berridge got a telling break, making no mistake has he homed in on goal.

Mickleover made their first change when Warren came on for Fankwe and his silky skills soon became apparent. Dales fired high and wide after 58 minutes and there was as slight chance five minutes later, when Marshall back healed into space in the box, but no one was there.

Butler came up for a corner and headed just wide and then another positive charge from Dolan down the left, found Dales, both could have shot but it was passed to Warren and the chance had gone.

McGlinchey tried a chip over the bar for Coalville after 73 minutes, but it was Mickleover pushing forward in their best period of the game.

Davidson-Miller then came on for Beavon and at the other end Hedge then held a cross from Shaw.

Hedge was in action when he collected a long-range effort from Chambers and with everyone pushing forward, Watt nearly found himself clear on goal after a free kick.

With six minutes left Dolan forced a diving save from White, before Coalville got another break against the run of play. With Shaw out running the remaining defence, he found Chambers unmarked and it was sealed at 2-4.

Three minutes from time the ball fell nicely for Davidson-Miller, but he didn’t get a shot in. Then a scramble following a corner could easily have broken in Mickleover’s favour.

Dolan had another opportunity with virtually a free header on the left, but that came to nought, and it was game over.