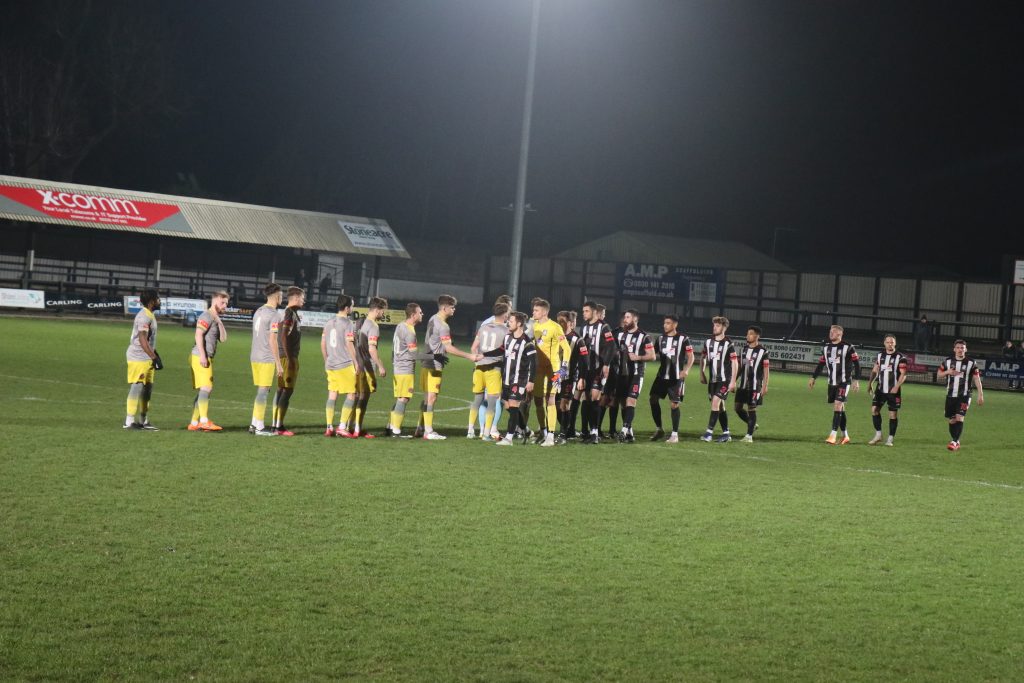 It was the hosts that started on the attack winning the first corner of the game after three minutes.

Hedge was in action a couple of minutes later collecting another Stafford attack with ease, before another ninth minute effort from Cuff went high and wide over the stand roof.

Mickleover had barely passed the halfway in the first 10 minutes, but suddenly sprung to life with Beavon firing his first effort at keeper Hewelt.

Three minutes later Beavon was chasing a long ball forcing Hewelt to intercept, with his clearance over the stadium wall for a corner.

There was a half chance for McDonald when one of the home defenders fell just outside the box, leaving the Mickleover striker to collect the loose ball. But he was tripped, the ball was cleared but no free kick was awarded.

Warren, Milner and Ravenhill began to get the ball out of midfield more in what had become a fairly scrappy game from both sides. 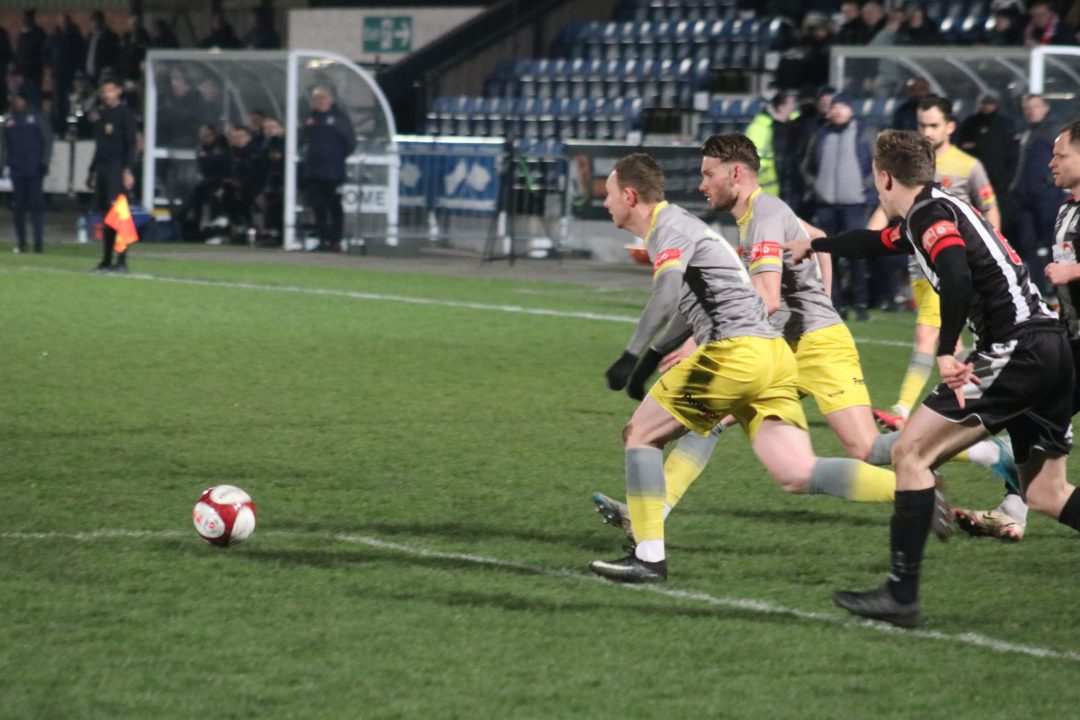 The general push forward brought another chance for McDonald, but his 19th minute effort cleared the bar and was followed two minutes later by a similar Stafford effort.

Where as the hosts were favouring long balls and a chase, Mickleover were trying to play their normal game, using debutant Walker and Dolan on the overlap.

Ravenhill was hacked down and needed treatment, he continued for a few minutes before being replaced by Agustien.

Dales was having a fairly quiet game, but his 29th minute cross from the left found Beavon in the box, he stepped aside for the better positioned McDonald, only to be caught by surprise and failed to connect.

Beavon was then fouled again but Warren’s free kick was blocked, but another free kick soon followed  when Dales was taken down.

For a short while Mickleover were on top but when Butler lost possession after 33 minutes, Stafford had a chance which they failed to maximise.

As Dales runs became more active, he was only stopped in his quest for goal by Ethan Stewart in the 35th minute, but came straight back to earn a corner after almost finding unmarked Milner.

Stafford began to come back with some random wild shooting from outside the box, before Beavon went down the right and crossed for Agustien, whose effort was blocked. 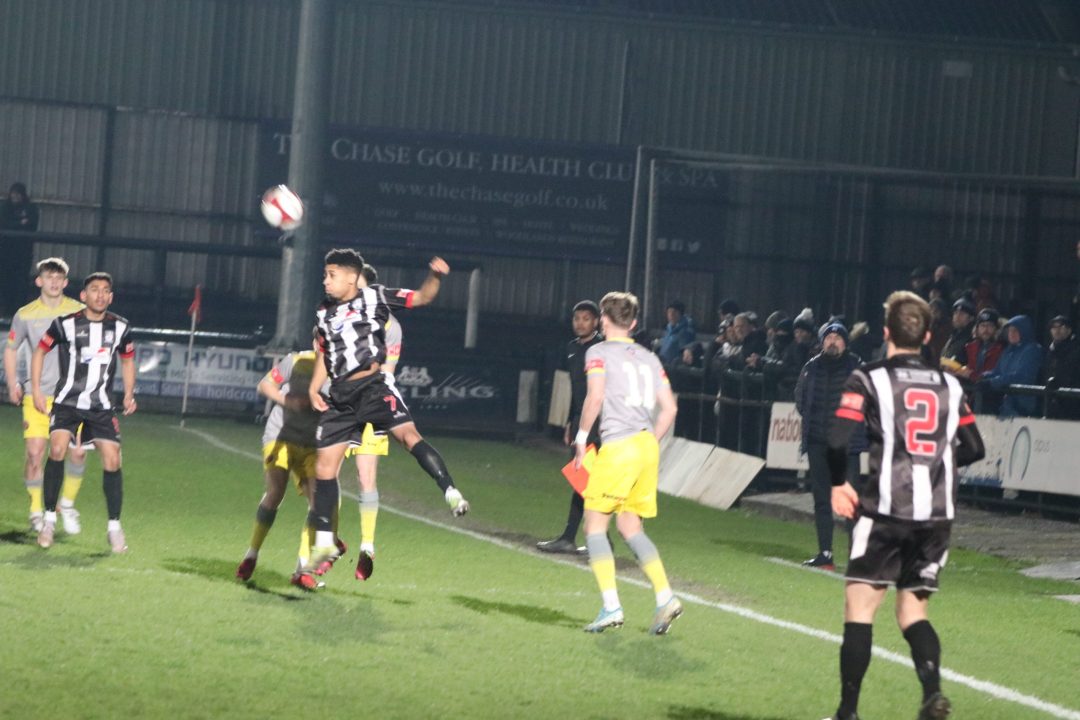 With half time approaching the hosts had a couple of attacks thwarted, earning a late corner which preceded another shot over the bar.

It wasn’t the most memorable first half, with both sides lacking accuracy and with it clear cut chances.

There were no immediate changes for the second half, but only two minutes in Agustien found Milner whose shot was over.

But Stafford seemed to have started the second half with more urgency and accuracy. With Butler failing to clear an attack after 48 minutes, Dolan managed to block the following barrage, but took a knock to his back and needed treatment.

Dales then got a break after another failed Stafford attack. He ran almost the length of the field before his final cross went straight to a defender.

Sports survived a succession of Stafford corners and when Agustien miskicked in front of the Mickleover goal, the hosts failed to capitalise as they missed it too.

But the 13th minute of the second half proved unlucky for Mickleover, when after losing possession again on the halfway line, Joe Cuff charged goalwards down the left, beating Hedge on his far post. 0-1 after 58 minutes.

Kaiman Anderson had another long but random shot shot well off target, but after 66 minutes they collected a loose ball after Dolan was caught out, but the cross passed the goal face and any Stafford support.

Mickleover made a double substitution with Dales and McDonald making way for Wright and Davidson-Miller.

77 minutes and Wright had the ball on the edge of the box. His path was blocked, but a cheeky chip came so close to finding Dolan in the box.

Davidson-Miller had an effort saved by Hewelt a minute later, but then a miskick by the Stafford keeper after another Beavon run almost handed a chance to Milner, but the defence recovered just in time.

Time was running out for the equaliser, and Davidson-Miller tried his luck again with three minutes left as Sports pushed everything forward.

Beavon was virtually through after 88 minutes. His shot was good, but Hewelt made a finger tip save to deny the equaliser.

But with only a minute to go Milner was tripped on the edge of the box and Warren’s free kick found Radcliffe on the left, who rose serenely to head home for 1-1.

Hedge had to make one more save to retain the point and in added time Beavon was almost through again as the final whistle went, 1-1.