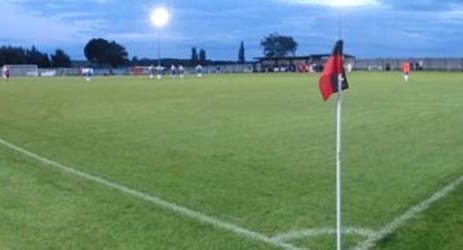 A 1030 pitch inspection got a positive review allowing the game to go ahead despite the inclement weather over the previous couple of days. The pitch was okay but along the bottom touchline, it was rather heavy going.

There was a stiff breeze blowing down the pitch from the Tesco Shelters end which both sides found difficult, added to the pitch being a bit rutted it didn’t help produce a great deal of passing football.

Having said that Mickleover did create a few chances without troubling the goalkeeper, whilst Fin Bowen at the other end had one fairly easy shot to deal with.

The first goal when it came was one of real quality. The ball was played out from the back and then under pressure from Teversal the ball was played back to Fin Bowen whose pass found Groves. The ball was played inside and as Groves continued his run Atwal played him through. The keeper advanced so  Groves calmly slid the ball across the goal to the back post where Smith had the simple task of completing the move from about 33 inches.

After some more pressure the referee awarded Mickleover a penalty which was despatched to the top right-hand corner with aplomb by Atwal. 2-0.

A third goal would have been deserved before halftime but not to be.

After the break, Teversal mounted steady pressure but with  Mann and Anthony standing firm it came to nothing until the centre forward finished off a decent move to make the scoreline a precarious 2-1.

With 30 minutes still to play there were still chances to be had for both sides which were squandered and the game unfortunately finished on a sour note with the Teversal goalscorer incurring the wrath of the referee for excess verbalisation.

A hard-fought win showing the lads growing in stature by dealing with difficult conditions and an energetic Teversal side.

After another enforced sabbatical we are travelling to Arnold on the 19th March before hosting Ashland at the Don Amott Arena on the 22nd.