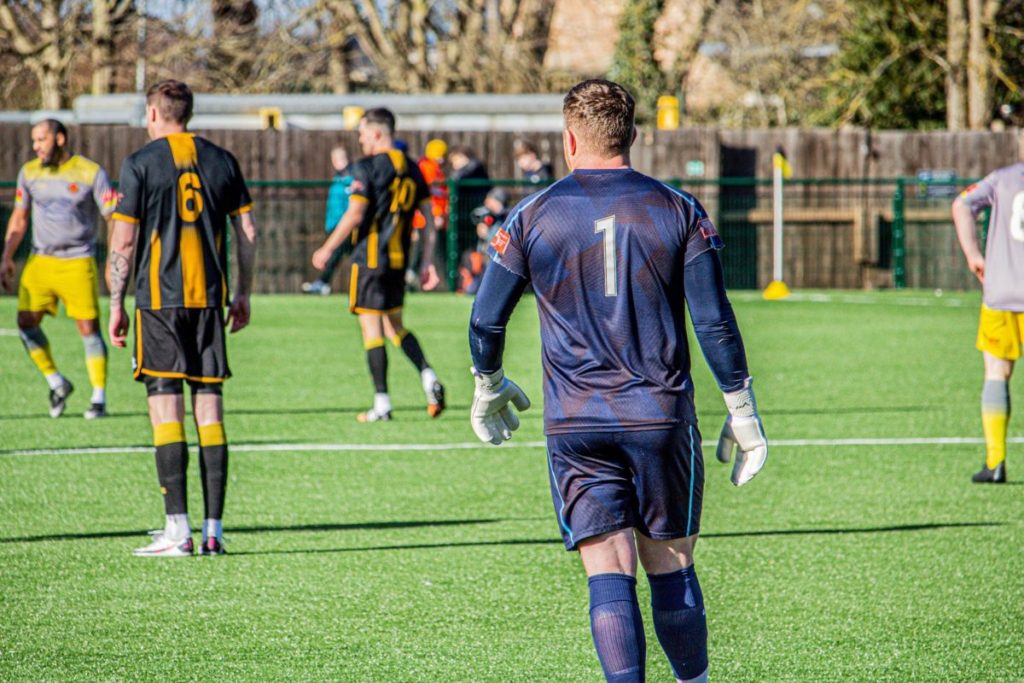 Two goals in four minutes, spanning the half time break ended any hopes Mickleover had of returning home with any points from their trip to Morpeth.

Mickleover were straight into the attack from the kick off, with Dales shooting from long distance after only two minutes, but his effort was easily taken by keeper Lowson.

But the hosts proved to be just as keen with Noble’s effort over the bar on eight minutes and Andrew Johnson putting a curling ball just passed the post a minute later, after Dales had just failed to send Milner on a run.

Dales pace was causing problems for Morpeth captain Jeff Henderson and he was able to send in another shot, after picking up a long clearance from Hedge, earning another corner.

Agustien then fired in an angled shot which was well saved by Lowson and then attempted to send Beavon on a run, only to be flagged offside barely into the Morpeth half.

Mills tried a long shot after 15 minutes just over, before a Dales shot was blocked and Beavon’s attempt at the rebound sent a scuffed shot straight to Lowson.

Mickleover’s efforts goalwards were coming thick and fast, as Wright had a shot 18 minutes in, but once again failed trouble the keeper.

Although Morpeth were managing to progress, their final pass seemed to be missing any obvious target and as Mickleover’s midfield of Agustien, Radcliffe, Wright and Milner took control Dolan began to move further forward and Beavon had another shot just wide.

Johnson led a good attack for the hosts after 21 minutes, but had no support available, but a couple of minutes later Lowson was forced to charge off his line to clear, only to send it straight into Mickleover’s possession, before giving away a free kick.

Agustien’s kick failed to trouble the defence, but was followed by a good run from Ramsey, cutting inside after beating Dolan. The final shot was blocked before the danger was cleared

There was another chance for Dales after 27 minutes, when a build up from Wright to Beavon, found Dales head, but his effort was over the bar again.

It was Dales causing more troubleon the half hour, again outpacing Henderson, before his cross failed to find a Mickleover shirt.

There was a little skirmish between Mills and striker Liam Henderson, in which the latter seemed to fall to the ground twice, neither impressing the referee.

But Morpeth had started to push forward again and won a corner off Mills, which Noble took and was headed clear by Radcliffe.

Johnson had the ball in the net for Morpeth after 37 minutes but was flagged offside and then Noble tried from long range, but failed to trouble Hedge.

With five minutes left of the first half, a lob from Beavon cleared the perimeter wall, but with the whistle almost poised Johnson got the ball with acres of space the right, cut inside and fired a shot into the far corner beyond Hedge’s reach, 0-1 after 44 minutes.

Almost from the restart Donaldson broke again for Morpeth and fired a shot over the bar as he was relatively unchallenged.

Radcliffe tried to respond with a long shot just passed the post, but they went in 0-1 down, which didn’t really reflect the half’s play.

Barely had the second half kicked off and Liam Henderson made it 0-2, with Sports defence wide open again on right, allowing a cut back and shot from close range.

Wright had a shot blocked as Mickleover tried to fight back, but Morpeth were much sharper than in the first half.

After Beavon had another attempt blocked, Ramsey got a break, but his final ball just missed the following strikers, but still earned a corner.

Agustien floated a ball goalwards onto the roof of the net and after 55 minutes Dolan started a move to Dales and Milner, before they back tracked and rebuilt from defence, with Radcliffe trying another long shot.

Just before the hour mark Hedge was tested by a free kick which was just over and then Butler had to clear the lines after another run from Ramsey.

Morpeth had started to look fairly comfortable, but with 63 minutes on the clock, Milner was fouled in the box and a penalty was awarded.

Keeper Lowson was booked for dissent before Wright stepped up to take the kick. The keeper got a hand to the ball but couldn’t stop it from crossing the line, 1-2.

Suddenly the pattern of the game had changed and it was Mickleover pushing for an equaliser.

Wright had a shot pushed over by Lowson after 66 minutes and with Milner in a more attacking role, things looked positive.

The tide soon turned again when Morpeth had a 75th minute free kick. Johnson received the ball and put it across the face of the goal. Hedge got a hand to it but Henderson put it home 1-3.

Mickleover went for a double substitution with seven minutes left, bringing on Davidson-Miller and debutant Moore, for Dales and Beavon, before calls for a Morpeth penalty fell on deaf ears, with Mills clearing.

Atwal came on for Agustien for the final couple of minutes, but it was a disappointing result after some early promise and sees Sports back down to 20th place, with local rivals Matlock Town next up at the Don Amott Arena.