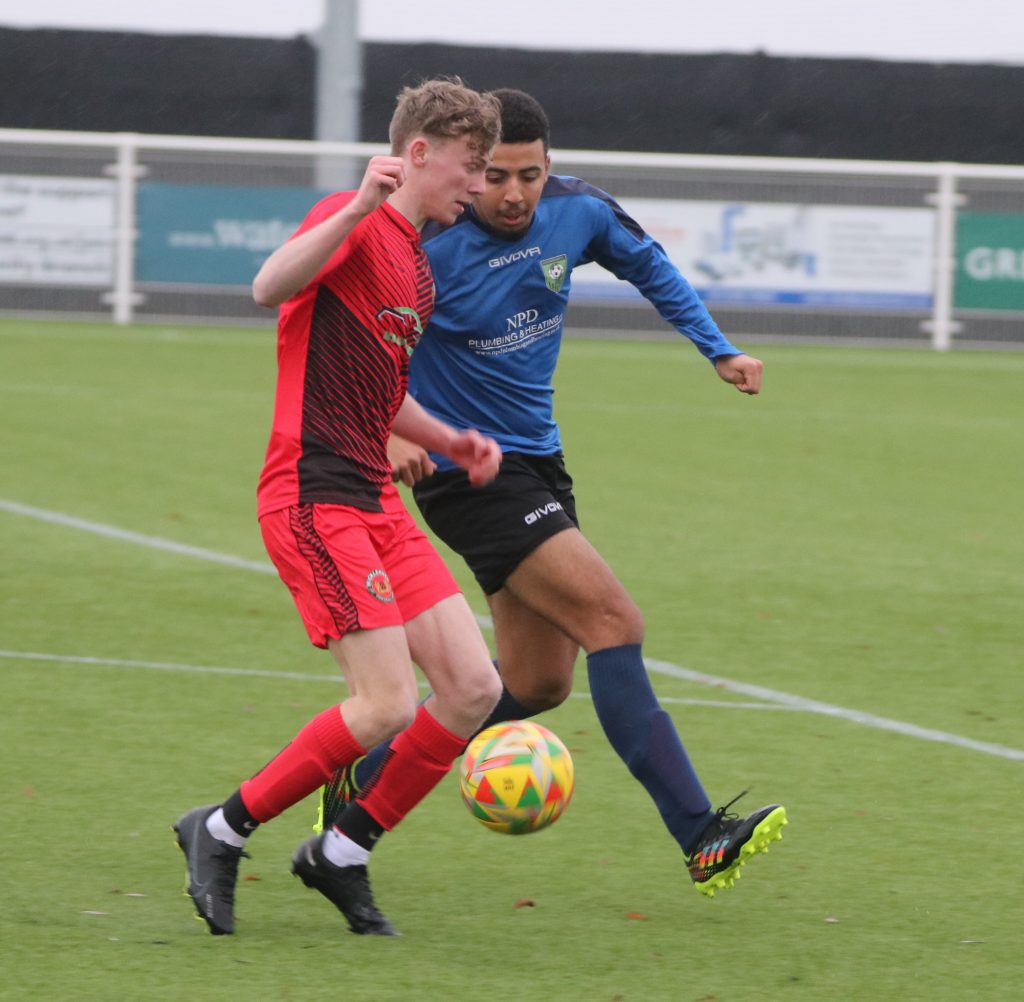 Mickleover Reserves ended 2022 with a home point against a strong free-running Nottingham FC side in the Central Midlands Premier Division South.

Mickleover were first to threaten with a free-kick two minutes in, after Pennington was fouled. But only two minutes later Nottingham’s pacey right winger picked up a midfield interception and shot just wide of Bill’s right hand post.

Parr then went close to opening the scoring, when a defensive mix-up for the visitors saw their keeper stranded as he came out to defend on the Mickleover right, but Parr’s final shot was cleared off the line.

Ferron was having a hard time on the left wing and was in the referee’s book after 17 minutes, for a push in his rival wingers back.

Mickleover had started to edge slightly ahead in a fairly even game and just missed out again after 21 minutes, when Parr fed Ryder on the right, his cross was then met by Mills, whose shot ricocheted off the post.

A minute later it was the visitors number seven again outpacing the defence, before his cross was met by a striker, but his shot was straight at the keeper.

The visitors continued to look dangerous on the breaks, but as the rain became heavier, some of the long balls forward for Mickleover began to outrun their targets, with Brown in particular suffering as he tried to chased ball from Ryder, Parr, Pennington and Atwal.

Ferron managed to complete a run after 35 minutes, cutting inside from the left to shoot just past the left-hand post, but then a Nottingham striker tried to take the ball too far before shooting, enabling Rock to get back and rescue.

Brown was desperately close again on 38 minutes. He managed to put the ball wide to the advancing keepers right, but it was only inches wide too.

It seemed to heading into half-time goalless when Bill made a  good save from a positive strike, but with the whistle poised Ryder crossed again from the right and Mills made no mistake 1-0.

Barely a minute later the visitors number seven again had the legs of Ferron, but managed to turn him too, before firing home the equaliser as we final reached half-time, 1-1.

The second half started with the visitors showing even more confidence and once again the troublesome number seven once again went close, almost from the kick-off, before his fellow striker wasted an opportunity right in front of goal and fired over the bar.

Bonser had managed to push forward more and found Brown who crossed to Mills in the box, but the shot was just over again, but after 51 minutes there was a huge scramble in the Nottingham box, and a number of Mickleover players tried to get a shot in, but all paths were blocked. B

The visitors then went ahead after 54 minutes, with poor defending from a free kick leaving Bill beaten, 1-2.

The Sports keeper had to charge out of his area to intercept just after the hour mark too, but it was still mainly end to end action.

Ryder again made good progress on the right after 77 minutes, playing a positive through ball to send Brown on a run. He took it round the advancing keeper and slotted home for 2-2.

There continued to be half chances for both sides as the clock ran down, and Mickleover subbed Atwal for Cozens. Parr had a shot saved with five minutes left and Nottingham tried a few random shots too, which were either off target or taken by Bill, including a excellent diving save to his right deep into injury time.

A draw was a fair result, in a game that showed plenty of action and was played in good spirits too.