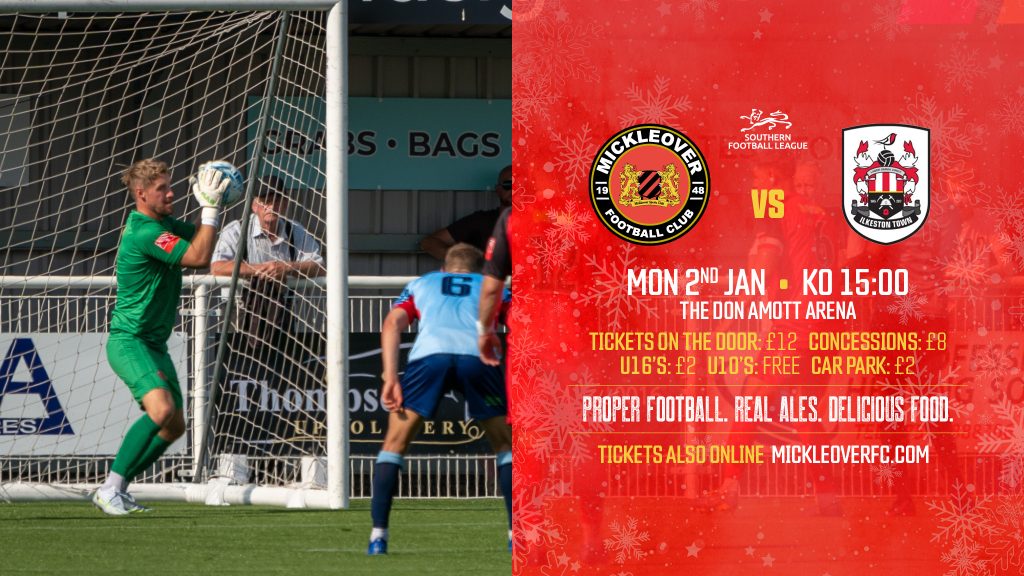 For the first game of 2023 Mickleover we will be hosting local rivals Ilkeston Town. Our visitors are just one point behind us now in seventh place, following their 1-1 draw at home to Basford on Boxing Day.

Five out of the last six games have been at home for Ilkeston, suffering the one defeat 0-2 to Tamworth, having previously had a run of three successive victories.

Their last away game was a 4-1 win at Redditch, having previously lost 0-2 to Nuneaton on November 12th.

Having come into the league on promotion, it was a difficult start to the season, and on our earlier season visit to the Manor Ground we came away 3-2 winners after an Elliott Reeves double and a goal from Rhys Dolan.

Former Rams and more recently Buxton player Jamie Ward is now in charge and has guided them from the edge of relegation to the edge of the play-offs.

There have been a lot of line-up changes with 18 players starting in the last five matches and only two starting them all.

Ollie Battersby currently has the goalkeeper’s shirt, but has been alternating with Saul Deeney. Battersby is currently on loan from Grimsby Town and is a former Sheffield Utd Junior. He played one game for Mickleover back in 2020, playing the whole game with a broken hand. He has also been loaned to Lincoln Utd, Gateshead and Belper Town.

Former Derby County and Burton goalkeeper Saul Deeney came to the club from Coalville in March 2022. He is now 39 years old and a former Republic of Ireland Under 21 International and started out at Notts County, with Hull City and Burton Albion among his former clubs. He was previously loaned to Ilkeston 20 years ago!

Skipper Kieran Fenton is a former England Under 19 International, who started his career with Nottingham Forest. He was loaned to Tamworth before joining Worksop, moving on to join Coalville, before signing for Ilkeston from Quorn in November 2019.

Player manager Jamie Ward is another well- known player, who was signed from Buxton in the summer. The Northern Ireland international has over 400 league appearances under his belt scoring over 100 goals.

Apart from his time at Derby, Burton and Forest, he has played for Sheffield Utd, Charlton, Cardiff, Scunthorpe among other teams.

Midfielder Jack Thomas came from Tamworth in March 2022. He was a Mansfield junior and has played for Hednesford, Boston Utd and Basford. It’s his second spell at the club, having left in July 2021.

Striker Remaye Campbell came from Grantham in July 2021, after a junior career at Notts County and is one of the first-choice players in the squad, with a goal scoring touch.

Declan Thompson is a newer arrival from Sheffield Wednesday. The young right back also had a spell at Stocksbridge, before arriving at the Manor Ground at the start of the season.

Striker Chris O’Grady is another vastly experienced player, having played well over 500 league games and scoring 110 goals. A Leicester City Academy player he joined Ilkeston in May, having been out of the game since leaving Bolton in July 2020.

He’s played for Oldham, Chesterfield, Brighton, Burton, Nottingham Forest, Barnsley, and both Sheffield United and Wednesday to name but a few. He has been at Ilkeston since May and is Campbell’s regular striking partner.

Left back Henri Wilder came from Alfreton a few weeks ago. He started at Brighton before joining Mansfield Town. After a loan at Lewes, he joined Tamworth in 2019, moving to Alfreton three years later.

Defender Fin Delap is currently on loan from Burton Albion and is the son if former Rams and Republic of Ireland International Rory and brother of Stoke City’s Liam.

Striker Lee Tomlin is a very recent arrival, following a short break after departing Doncaster Rovers. He started out at Leicester City, before joining Rushden & Diamonds. After a loan at Brackley he signed for Peterborough Utd and then moved on to Middlesbrough, Bournemouth, Bristol City and Cardiff, with further loans at Nottingham Forest and Peterborough again. He started this year at Walsall and went to Doncaster in October and has also played for England C.

Well known to Mickleover fans is striker Dempsey Arlott-John. A pacey young striker and Leicester City graduate, he joined Sports at the beginning of last season, but was unable to force his way into the starting line-up and moved to Shepshed in December 2021. He moved to Ilkeston in September and is a regular goal scorer.

Right back Joe Wilson was an early season signing, coming from Gainsborough in August. He started out at Reading and has progressed via Fleet, Hayes & Yeading and Staines Town.

Silvio Bello is a right back too, signed a few weeks ago after coming from the Nottingham Forest Academy.

Defender Tom Hilton is back in the first team squad after some time at Kimberley MW, he has also played for Heanor Town.

Midfielder Reco Fyfe rejoined our visitors from Long Eaton in October. He joined them towards the end of 20/21 from Basford and has also played for Gainsborough, Heanor and Carlton.

Tyree Wilson is a young winger or midfielder who came to the Manor Ground in November, following his release from the Rams Academy.

Dan Bradley is another recently arrived midfielder. He was an Aston Villa Junior, before moving to Tamworth. He’s moved on fairly rapidly via Kidderminster, Alfreton, Barnet, Fylde and Nuneaton, before a three-month stay back at Tamworth preceded his March 22 move to Ilkeston.

Third choice keeper is Harvey Woodward who helped out Kimberley MW earlier this season, while newest signing of all Thabang Dube, was on the bench for the first time against Basford, having come from Farsley Celtic. The young striker has also played for Shepshed Dynamo, Newark and Tamworth, having started with Leicester City.

We will be hoping for our biggest attendance of the season, kick off is 3pm at the Don Amott Arena, but be there early.