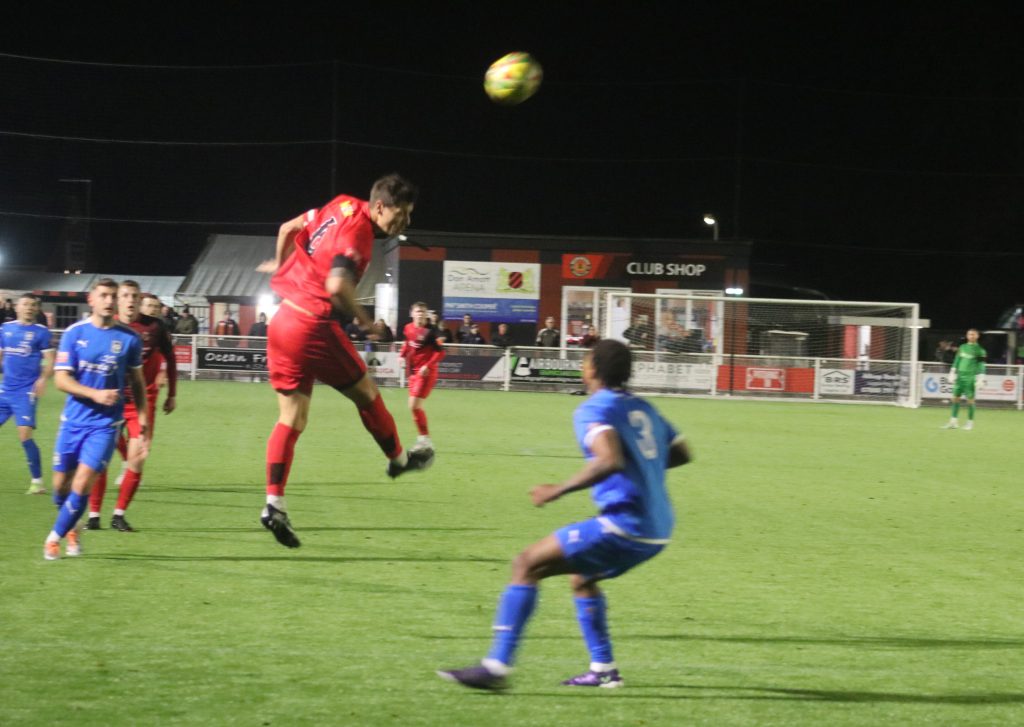 Mickleover went into last nights home game against Stourbridge off the back of five straight wins in the Southern Premier League Central, but thoughts weren’t entirely on the game in hand as the whole of the Mickleover FC family paid tribute to the passing of goalkeeper Finn Bowen.

Captain for the night Ethan Mann led the teams out, before a minutes silence preceded kick off.

It was five minutes into the game when Mickleover had their first shot on goal, with Beavon finding Warren, whose shot was deflected for a corner, from which Greaves shot was saved by keeper Charlie Price.

Greaves was in again three minutes later, after a good build up down the left. His shot was saved and earned another corner, with Watt heading over.

Yeomans and Greaves were linking up well down the right wing, but the amount of possession was fairly even. Mickleover were creating the chances, as Stourbridge relied on the break.

12 minutes in and the visitors had their first real attempt on goal, but when the final cross came in, Mann headed clear.

Reeves and Wilson earned another corner five minutes later, but despite some effective passing, the final ball was just lacking.

Dolan then found himself with a chance to shoot inside the box, but his proximity to the keeper saw it blocked, and another corner.

Stourbridge finally cleared the danger after a couple of minutes of intense attack and had a couple of breaks themselves on goal.

The ball fell nicely for Jason Cowley, but Watt was quick to respond and whipped the ball away again after 24 minutes. Shortly afterwards the deadlock was broken, as Warren had the ball around the half-way line, saw the keeper off his line, and lobbed a perfect shot over the keeper into the welcoming net, 1-0.

All the Sports players then headed to the bench in celebration, waving Bowen’s shirt proudly in another fitting tribute.

Hedge had to make a Lyttle on the half hour, before Cowley headed over again a few minutes later.

But it was still mainly Mickleover on the attack, with Beavon letting fly from long range, but his effort was blocked, before Reece Styche had a shot wide for the visitors.

It was close again after 35 minutes, when Beavon cut in from the right and Warren just missed connecting after he found space. Dolan then raced in from the left only for Joel Kettle to block and then Mann followed suit with a long and positive run, placing his shot just wide of the right-hand post with the keeper rooted.

As the half time whistle approached, a good build up down the right again, saw Warren shoot wide, before Reeves finished the half with a fine shot tipped away by keeper Price.

In the opening minutes of the second half Reeves broke and went close again, but Price was able to save. The game then changed direction with Alex Moore hitting the equaliser directly from a free kick on the Mickleover left. 1-1.

From having the upperhand Mickleover were now on the back foot. Mann cleared a dangerous ball in from the left, before Stourbridge had a succession of corners before the pressure relented.

Warren, Bateman, Wilson and Greaves in midfield found themselves with little space, as the visitors went close again after 56 minutes.

Lyttle hit a free kick straight into the Mickleover wall just after the hour mark and after 69 minutes Yeomans got a shot in well saved by the diving keeper.

It was certainly a game of two halves as Mickleover struggled to make progress. Dales and Osideko came on for Warren and Reeves, but they made little impact.

Beavon almost got Reeves through after 75 minutes, but the ball out paced him and ran to the keeper and in the 90th minute Dales put a ball in from the left, but it was cleared for a corner, which was then headed wide.

So it remained 1-1 and we are still fourth in the table, but now face two away in the next week at Redditch and Alvechurch.