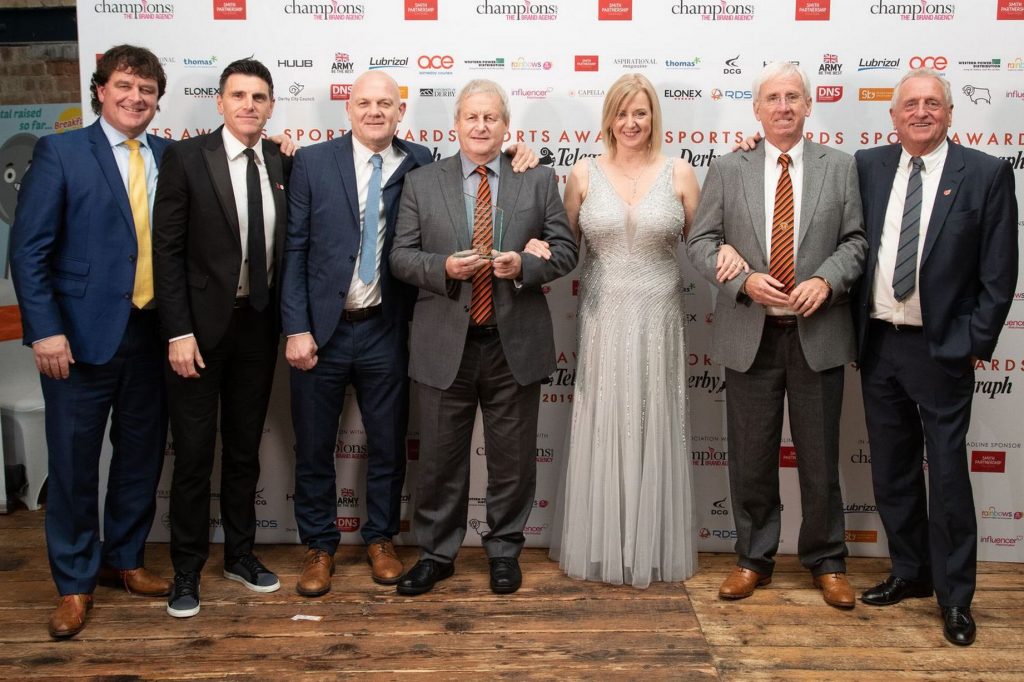 Mickleover Sports Club won ‘Club of the Year’ at the Derby Telegraph Sports Awards 2019 on Wednesday 6th November. The second award we have picked up this season – a great achievement. Congratulations to everyone involved, we have come along way in the last few years, it shows we are more than just a sports club, we are part of the Mickleover Community.

Mickleover Sports embodies the vision of two of Derby’s most prominent names to create the finest community club in the region.

Don Amott, who has been chairman of Derbyshire Cricket Club and board member of Derby County and Burton Albion football clubs oversees all aspects of Mickleover Sports’ growth and prosperity.

His right-hand man is Keith Loring, who was chief executive when Derby County moved into Pride Park and held the same position at Derbyshire County Cricket Club.

Both men have galvanised a club which touches the lives of thousands of people in Derbyshire.

Mickleover Sports is much more than the football team which plays in the Northern Premier League, the third level of the non-league pyramid.

Aside of its two men’s teams and two academy sides, the club has an incredible 31 junior squads as well as a ladies’ team and two girls’ sides.

Mickleover Sports is a long-established name but Don and Keith have given it deeper routes into its local community.

For example, they came up with the concept of Hot August Night – an outdoor family music festival with bars and food outlets – which sold all 4,426 tickets.

Over the past three years, it has raised £23,000 for Our Mickleover, the local community organisation as well as funds for the sports club.

Mickleover Sports hosts a range of events for the community from an ‘inflatables’ day, to fireworks, circus and a sporting dinner.

This means more people than ever have been attracted to a club with which they had no previous affiliation.

It has also opened its arms to other clubs – Derby County Ladies now play at Mickleover.

There are now plans for a 3G pitch which would be available to the whole of the community too.

It has also developed a wonderful network of partnerships in the local area.

This is particularly true of its tie-up with the University of Derby which has seen five international students appear in the Mickleover Sports senior football squads.

John has gained a name for developing some great players over the years, including Morgan Williams currently at Coventry and Andy Dales now at Scunthorpe.

Don and Keith consider their involvement as payback time for all the years of fulfilment they have had from local sport. They have created something really special at Mickleover Sports – a club of which the community can be truly proud.

But its story is far from finished. I suspect the next chapter will make even more heads turn.