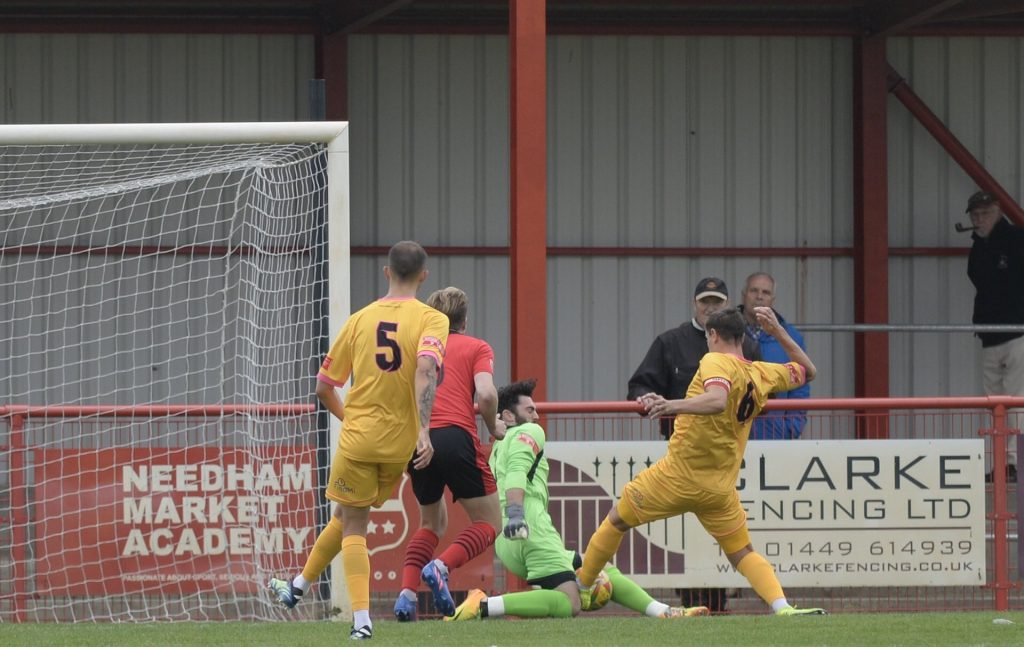 Mickleover’s hopes of a fourth successive Southern Premier League Central win came to end over the weekend, going down 0-2 on their visit to Needham Market.

The hosts opened the scoring after 21 minutes, when Daniel Morphew flicked on a corner, which was collected by Jacob Lay who scored from close range. 0-1.

Six minutes later Needham could have had a second, but having almost sent his initial touch goalwards, Butler cleared the danger, after Lay had sent Jake Dye on the overlap, firing in a low and dangerous cross.

But our hosts were down to 10 men after 34 minutes, when defender Kyle Hammond was sent off after two yellow cards in close succession.

There was little chance of Mickleover taking advantage, as only seven minutes Bateman followed  after a straight red for a dangerous tackle on Noah Collard.

With the half time whistle poised, Mickleover hit the bar, but fortunately for Needham, the rebound was straight into keeper Shorten’s waiting arms and it remained 0-1.

Early into the second half, Patrick Brothers had a shot wide for our hosts and on the hour he went close again with a curling shot just wide again.

But 76 minutes in and Lay scored his second, after Brothers found him in the box. Having beaten the defence he slotted it past the advancing Hedge and it was 0-2.

Despite Sports efforts to fight back, they were not able to add to the score sheet and returned home pointless and for the first time this season goalless too.