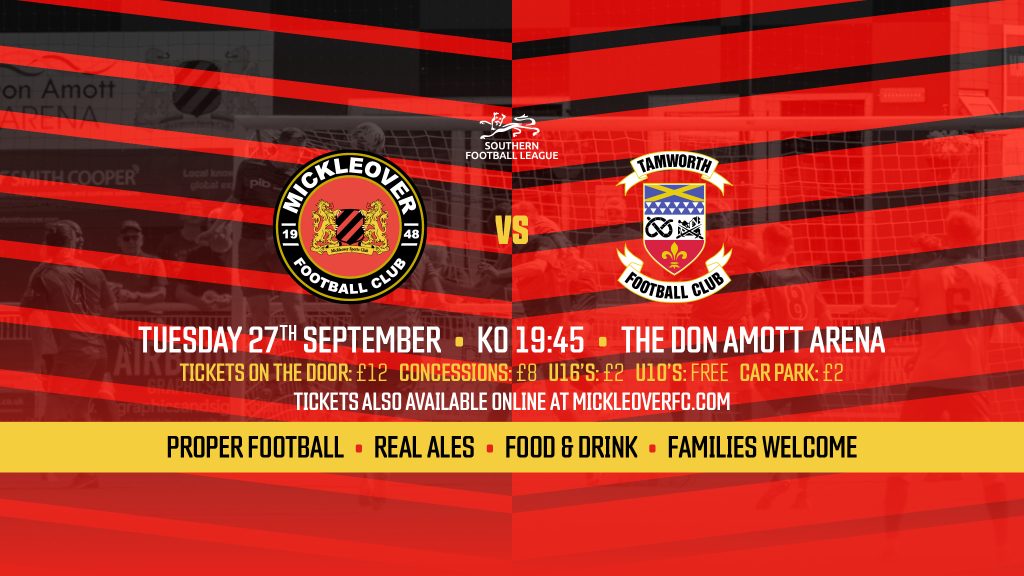 After the disappointing defeat at Needham Market last Saturday, Mickleover will be hoping to bounce straight back for the visit of top of the table Tamworth on Tuesday evening.

Our visitors have won five of their eight games, including an 8-1 victory at Bedford. Their only defeat was 1-4 at home to Coalville Town and last Saturday they beat Kings Langley at home 3-0.

Elliot Reeves’ fire power will be back to Sports squad too for this match, after serving his two-match suspension.

Tamworth Manager Andy Peaks has been in charge since February, having moved from Rusden & Diamonds. He started as a player at Northampton, before playing for Rushden, Raunds, Wealdstone and Stamford. After being assistant manager at Long Buckby and Daventry, his took charge at Northampton Spencer before moving back to Rushden.

Goalkeeper Jas Singh is one of six ever present players this season. He arrived from Telford in July 2018, having started his career at Shrewsbury Town. He has also played for Kidderminster, Solihull Moors and Gloucester City.

Matt Curley is a right back who came from Buxton in July. His career kicked off at Romulus, before moves to Chasetown, Sutton Coldfield, Tamworth and Hednesford preceded 2 ½ years at Buxton.

Midfielder Gift Mussa has spent his whole career in the West Midlands, after starting out at Coventry Utd. After a short spell at Leamington, he spent almost two years at Bromsgrove, before a further year at Nuneaton prior to his arrival at Tamworth in February.

Alex Collard is a centre back and club captain, having arrived from Rushden during the summer. He’s also played for Aylesbury, Chichester City and Kempton Rovers.

Fellow centre back Liam Dolman came through the ranks at Northampton Town, making over 50 appearances for the Cobblers. He was loaned out to Aylesbury Utd and Kettering, before joining Kidderminster on his release. Corby, Banbury and Daventry then preceded eight years at Rushden & Diamonds, signing for Tamworth pre-season.

Striker Dan Creaney is the last of the ever-present players this season, and has been at Tamworth since signing from Coalville in July 2019.  He’s also played for Bedworth, and during his time Coalville was loaned to Basford and Stratford.

Left sided midfielder Kyle Finn came from Halesowen in July. The former Coventry City Junior had previously be loaned to Tamworth, along with Hereford and Rushall, before joining Halesowen on his release in July 2019.

Left back Callum Cockerill-Mollet is a former Republic of Ireland Under 18 and 19 International. He was a Walsall Junior loaned out to Telford and Chasetown, arriving at Tamworth in late 2019 following his release.

Luke Fairlamb is a midfielder signed from St Ives pre-season. After starting out at Corby he had five years in the US with St Peter’s University Peacocks. On his return to the UK he joined Rushden & Diamonds, moving on via Bedford, Sileby, Brackley and Banbury.

Central midfielder Jordan Clement started out at Wolves, joining Romulus after his release in 2016. After a spell at Coleshill he had his first stop at Tamworth in 2018 and was also loaned to Stratford, before moving to Alvechurch and finally Redditch, from where he was signed in August 2021.

Eoin McKeown is a well-travelled striker, who started off at Colchester Utd. After a loan at Maldon & Tiptree he was released and joined Kings Langley. Further moves have taken him to Wingate, Walton Casuals, Loughborough University and latterly Braintree, from where he was signed in February this years. He has made three starts and scored one goal so far this season.

Ty Deacon is a striker signed from Kettering in July. He has made two starts and has also played for Rushden & Diamonds.

Former West Bromwich Albion Junior midfielder George Cater has only started once this season. After joining Kidderminster, he went to Stafford, Hednesford and Chasetown, joining our visitors in July after a return trip to Hednesford.

Centre back James Hurst has had a long and varied career. Capped by England at Under 16, 17, 19 and 20 he reached as high as league one, having started as another West Brom Junior, being loaned to Portsmouth, IBV Vestmannaeyjar in Iceland, Blackpool, Shrewsbury, Chesterfield and Birmingham, before returning to Iceland with Valur Reykjavik in 2013.

He joined Crawley Town after returning to the UK where his changes in clubs took him the length and breadth of the country. After two years at Buxton he arrived at Tamworth in January.

Yet another ex West Brom Junior, midfielder Alex Bradley came from Yeovil in pre-season. He’s an ex Finnish Under 16,17 and 19 International. He left West Brom in 2019 after loans at Havant & Waterloovile, Burton Albion and Lincoln City. His stop at Lincoln became permanent, before he moved to Yeovil in January last year and he made seven appearances in League One.

Striker Alex Jones was signed last November and is another ex West Brom Junior. After a move to Birmingham City he was loaned to Grimsby and Port Vale, before a permanent move to Bradford City. After a loan at Cambridge Utd he joined Patrick Thistle and was at Northampton before joining our visitors. He made his seasonal debut last Saturday.

Ben Hart, Cameron Howkins, AJ George and Keelan Fallows have all been on the bench so far, yet to make a start.

Hart is a right back who came from Burton in July last year, having previously played at Tamworth during one of his loan spells from the Brewers.

Centre back Cameron Howkins was signed from Brocton in December 2019, having started at Kidderminster. He has since had two loan spells at Khalsa, but returned to Tamworth in March.

Midfielder AJ George is an Antigua & Barbuda International who was signed from Rushden in July. A former Oxford Utd Junior, he moved on to Mansfield during which time he had a short loan spell at Mickleover in 2017.

Fallows is currently second choice goalkeeper recently loaned to Quorn. He was a Junior at Coventry and has also been loan to Daventry.