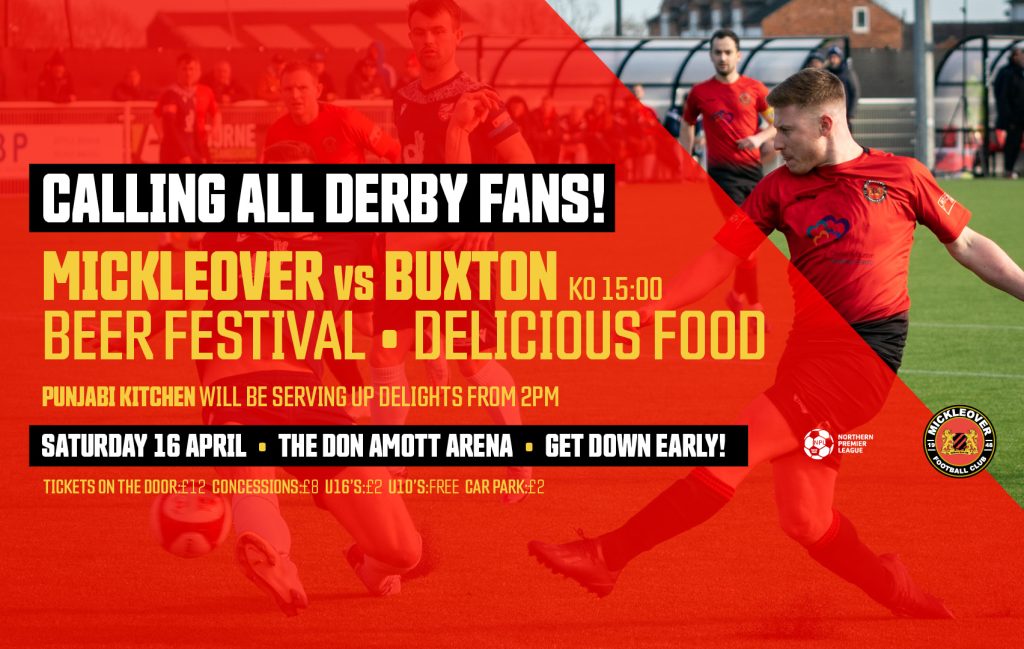 With their Northern Premier League future looking assured, Mickleover go into their penultimate weekend of league action with two games.

On Saturday its top of the table Buxton visiting the Don Amott Arena, before we travel to 20th placed Basford on Easter Monday.

Buxton have only conceded one goal in the last seven games, against Witton on March 8th and have scored 16 to put them two points clear at the top.

Seven of their current line-up have been ever present over the last couple of months, which has seen them look virtually unbeatable.

First choice goalkeeper Theo Richardson is an ex Manchester Utd junior who joined Grantham in August 2018. He soon moved on to Cleethorpes, before going to Kings Lynn a couple of years later. He has been at Buxton since July last year.

Matt Curley signed in February in a ‘swap’ deal with Hednesford Town and made an immediate impact with a goal on debut against Gainsborough Trinity. Primarily as a right-back, he is a versatile player and has played in various positions for Romulus and Sutton Coldfield, before joining Tamworth in 2017 and then Hednesford Town.

Skipper and a powerful defender signed from Barrow last summer, Josh Granite started his career at Woodley Sports and played for Sheffield and Hallam Universities before signing for Mossley. He then joined Trafford, before moving on to Ashton United and then Barrow, where he was made was club captain as they regained their league status in 2020 as winners of the Conference.

Right back Dan Cowan started out at Macclesfield, moving to Stockport after a loan at Chorley. Further stops at Guiseley and Curzon Ashton took him to Chester last summer, from where Buxton signed him in January.

Sean Newton is a left back on loan from York City. He is a well-travelled player having started out at Chester, with loans at Southport and Droylsden before joining Barrow. He has played at Telford, Stockport, Lincoln and Wrexham and has been at York for five years.

Former Wales under 21 international Chris Dawson was a Leeds United Academy product, making a number of first team appearances, before joining Rotherham United in 2016. He went on loan to Viking FK in Norway, but following serious injury he signed for Scarborough, helping them win promotion to the Northern Premier League before spending the 2018/19 season at Bradford Park Avenue. He was then loaned to Grantham Town, before returning to Scarborough and was one of three players to make the move from ‘Borough to Buxton in July 2020.

Ben Turner is a centre back from the Coventry Academy. After loans at Peterborough and Oldham, he moved on to Cardiff. Further moves took him to Burton, Mansfield and Notts County before joining Buxton at the start of this season.

Defender Nathan Fox played his youth football at both Notts County and Derby County. He has also played for Corby, Rugby Town, Coalville, Sutton Coldfield, Redditch, Hednesford and Kings Lynn. He came to Buxton last summer after a year at Alfreton.

Ryan Taylor has just come back from injury. He is a right back signed from Colne in January, after having time out in his career. A former England Under 21 International, he started at Tranmere, but has made over 500 senior appearances with Wigan, Newcastle, Hull City and Port Vale, plus spells in India with ATK and at Fleetwood.

Young midfielder signed September last year, Warren Clarke was a Sheffield Wednesday youth product, signing pro with the Owls in 2017, where he stayed for two seasons.

Tom Elliot is another midfielder signed from Hednesford Town in early December 2019. He started at Worksop Town before signing for Nuneatonin 2016, moving to Darlington where he made over 40 appearances for ‘The Quakers’ before signing for Hednesford in the summer of 2019. He was the first signing made by Gary Hayward when he joined the Bucks as manager.

Winger Lindon Miekle was picked up by Eastwood Town as a youngster from Vernon Colts. He then spent three years with Mansfield Town, before moving to York City, Macclesfield, Alfreton, Barrow, Southport, Kettering and Tamworth, from where he came to Buxton last summer.

Mackenzie Heaney is a midfielder on loan from York City. He started as a Newcastle Junior and has played for Benfield, West Auckland, Whitby and Grindavik in Iceland before signing for York last July. He has been capped as a Junior International by both England and Scotland.

Striker Diego Girolamo is a former Italian Under 18s, Under 19s and Under 20s international and Sheffield United junior who came to Buxton in July 2018.

After several first team matches for the Blades, his career at Bramall Lane was hindered by an injury picked up on Under 18 International, which ruled him out for nine months in 2013.

He was loaned to York City before returning to Sheffield where he scored his first goal for the Blades in a FA Cup tie against Preston North End. Two further loans at York and Northampton Town preceded a move to Bristol City in 2016.

He was loaned again to Cheltenham in January 2017, scoring a hat-trick in the EFL Trophy against Leicester City Under 23’s. Then loaned to Chesterfield and Macclesfield Town, where his prolific goal scoring became the highlight of his game and he is one of the top NPL goalscorers.

Ash Chambers is another experienced striker wo came through the Leicester City Academy. He had loans at Wycombe and Grimsby, before joining York in 2011.

After moves to Dagenham & Redbridge and Cambridge Utd he returned to Grimsby, before spells at Nuneaton, Kidderminster and Brackley preceded his arrival at Buxton last summer. He has also been capped by England at Under 16,17,18, 19 levels.

Jason Gilchrist is another experienced striker and former Manchester City and Burnley Youth player. He had loans at Droylsden, Accrington and Chester before joining FC United in 2016.

He then played at Southport and Stockport before joining South Shields in 2019. He came to Buxton from York City last December.

He joined them at the start of the season after training with Mickleover. Starting out at Aston Villa, he played for Stockport, Torquay and Chesterfield before making his name at Sheffield Utd.

He arrived at Derby initially on loan in February 2011 and stayed for four and a half years before joining Forest. He was loaned out to Burton, Cardiff and Charlton before being released in 2019, from where he came to Buxton via Scunthorpe and Solihull Moors.

Ryan Hardy and Johnny Saltmer are both recent loan signings. Hardy is an England C International midfielder from Chester, who started in the Manchester City Academy. He has played at Halifax, Fylde, Walsall, Telford and Altrincham too.

Goalkeeper Saltmer is from Bradford Park Avenue. A former Hull City junior who has played at Barrow and Darlington too.

OUR FINAL away game of the season is the trip to Basford on Easter Monday. Our hosts have struggled since New Year and haven’t scored a goal in the last four games.

Goalkeeper Kieran Preston is a Scottish Under 19 International who has been at Basford since December 2019 and is a former Bristol Rovers Junior.

Owen Betts is a young defender who started with Notts County. He had been at Basford for two seasons and had brief loans at Worksop and Spalding.

Lewis Carr came from Grantham back in 2016. He is a defender with experience at Stamford and Quorn as well as a spell at Cambridge Utd.

Well-travelled defender Dom Roma has spent the last five years between Basford and Scarborough, having originally joined our hosts in 2017.

Having started at Sheffield Utd, he played for Boston Utd, Tamworth, Hinckley, Alfreton, Harrogate and Gainsborough. He also had a spell as Gainsborough’s player manager.

Left back Ryan Wilson is the son of former Rams player Kevin. He started out at Ilkeston and after a move to Gateshead, played for a number of clubs in the East Midlands region, notably Alfreton, Coalville and Matlock. He came to Basford in May 2019 after spell at Telford.

Callum Frogson had progressed from the Basford Youth Team and is now regular starter in our hosts defence.

Centre back Brad Gascoigne was a Birmingham City junior, but since his release in 2012 has travelled widely through the non-league world. Having played for 17 clubs over his career he came to Basford in 2019 from Barwell.

Declan Dunn is a former Notts County junior. The young Centre Back also had a spell on loan at Grantham before joining Basford last season.

He returned to England with Buxton in 2012, and has also played for Shaw Lane and Gainsborough before signing for Basford in March 2017.

Defender Callum Chettle is the son of former manager and Forest defender Steve. He had football league experience with Peterborough, after starting out at Ilkeston and Nuneaton.

Signed from Quorn in January Liam Hearn is in his second spell at Basford. Another much travelled player who started at Hucknall, before moving onto Eastwood, Chasetown, Quorn, Alfreton, Grimsby, Mansfield, Lincoln, Barrow, Harrogate, Ilkeston and Alfreton, from where he joined Basford in ion July 2017.

He was loaned to Tamworth and then returned to Hucknall in March 2020, returning to Basford after his second spell at Quorn. He is also part of the coaching staff.

Courey Grantham is a midfielder signed from Heanor Town in 2015, he has also played for Ilkeston and Loughborough Dynamo and had a loan spell at Hednesford.

Lewis Rourke is another young striker and product of Basford’s youth scheme, along with keeper Gianni Musson.

Midfielder Lirak Hasani is a midfielder on loan from Doncaster. He has also been loaned out to Gateshead and Matlock over the last 18 months.

Jordan Helliwell is another loanee from Barnsley, a centre back or midfielder he has had loans at Stalybridge and Esbjerg in Denmark too. He is joined fellow Barnsley loanee midfielder Harrison Nejman.

Tyreace Palmer had been out on loan at Melton since singing last May, but the young striker is now back as part of the first team squad.

Charlie Marzano was also signed from Ilkeston on deadline day but is yet to make his debut.