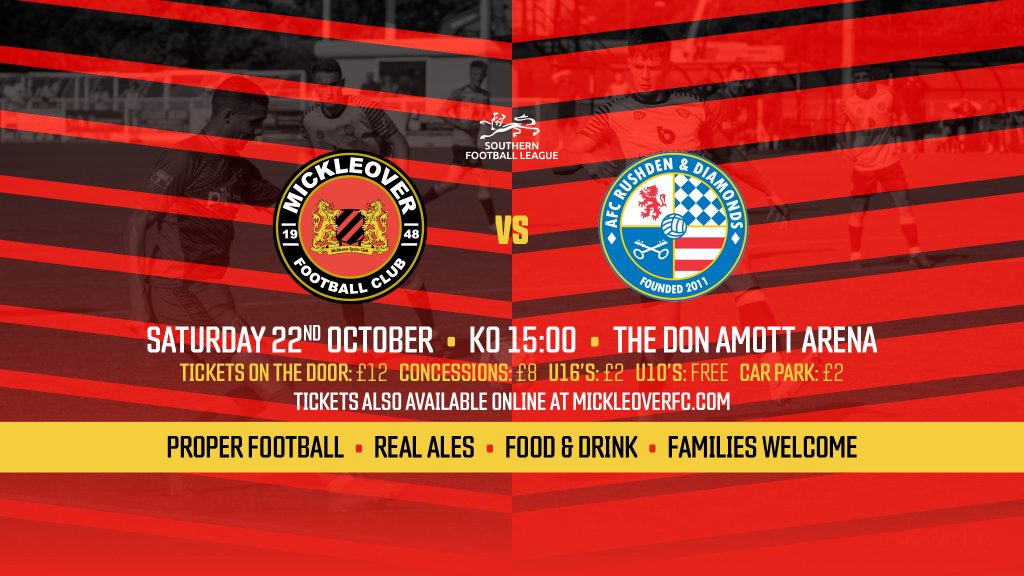 This Saturday at the Don Amott Arena Mickleover face Rushden & Diamonds, currently 21st in the table.

Joe Bateman should be back from suspension and it will be a first chance for home supports to see our four new signings.

A change of manager to Richard Maxwell in the last week may prompt a change in form for Rushden, but with wins at home to Nuneaton and away at Cadwell , plus two draws they have only amassed eight points so far.

In last weeks home game against Redditch went down 0-2, but in their last two away games they have failed to score and had 12 scored against, 0-5 at Hednesford and 0-7 at Coalville.

Most of their squad are relatively new singings and currently includes five loanees.

Keeper Dean Snedker was a Northampton Town Junior, who moved onto Brackley after an initial loan. Kidderminster, Nuneaton, Kettering, Cambridge City and St Albans were his next ports of call, before a year at Hemel preceded his move to Rushden in August 2021. He was also an England Under 19 International.

Centre back Ryan Hughes started at Northampton too and after a loan at St Neots, he came to Rushden on loan too for three months until January 2020. Further loans at Banbury and Corby followed, before a permanent move to our visitors in August 2020.

Hamilton Bunga is a centre back who came from Yaxley a couple of weeks ago. He started at Kingstonian, and is well travelled via Staines, Arlesey, Thurrock, Royston, Norwood, Bedfont Sports, Leiston, Basildon, Three Bridges, Hemel and Marlow, before a three-week stay at Yaxley.

Central Midfielder Nathan Hicks was a pre-season signing. He was at Kettering, Histon and Leamington, before a six month stay at Alfreton. Moving back to Leamington, he then played for Nuneaton, Kettering and Biggleswade, before his first spell at Rushden  in July 2018. Two years later he went to St Ives, from where he returned this summer.

Midfielder Luis Pinto-Leite started his career in Portuguese Junior football, before a stay at Bloomfield College in New Jersey. He signed for Rushden in July, through a Scholarship programme with Moulton College.

Courtney Lashley is a left back who arrived at Rushden in July from Northampton Town.

Norwegian Centre back Matthew Fossen was another July arrival. A former Bradford City Junior, he played for Halifax before returning to Norway with SK Herd. CD Bupolsa in Spain was his next stop, before Nybersgund in Norway. He then had six months at Linkoping City in Sweden before arriving at Rushden.

Miguel Ngwa is an 18 year old midfielder on a five month loan from Northampton. Similarly Morgan Worsfold-Gregg is also a midfielder and loaned from Lincoln City, again for five months.

Centre Forward Jack Connor is the third loanee, like Ngwa he has come from Northampton too.

Conor Tee arrived from South Shields in August. Another midfielder who, started at Leicester City, before moving on to Brackley, prior to spending last season with South Shields.

Jesse Akubuine is a midfielder too, who has spent much of his career in Scotland. Initially at Queen of the South, he played for Dalbeattie Star on loan and Open Goal Broomhill, before a permanent move to Cumbernauld. He has been at Rushden since July 2019.

Striker Jenson Cooper was a summer signing from Shrewsbury Town’s Academy. Midfielder Fraser Corden has only recently broken into the first team, having graduated through the clubs own youth scheme.

Striker Charlie Black was signed last month from UD Poblense in Spain. A former Luton Town Junior, he has played for Dunstable. Arlesey and Biggleswade too and has played in Finland and the US.

Jordan Hines is another striker to join the club during September. He started out with Bradford City and Sheffield Utd, before moving on to Halifax, Harrogate, Dereham Town, Thackley and Knaresborough.

Right back Nehemiah Agemoh-Davies was signed in August from Cambridge City, he is another ex Northampton player, who’s played for Stratford and St Ives.

Both striker Dylan Surace and goalkeeper have both come through the clubs youth scheme and joined the first team squad this season, along with centre back Dante Grey.

Attacking midfielder Tyreese Sutherland is another fairly recent arrival, having played for London Tigers and Dorking.

Kartell Dawkins is a young striker and the fourth loanee from Leicester City and finally Neo Richard-Noel has recently arrived from Kettering as s fifth loanee for a month, he’s a former Cambridge Utd striker.