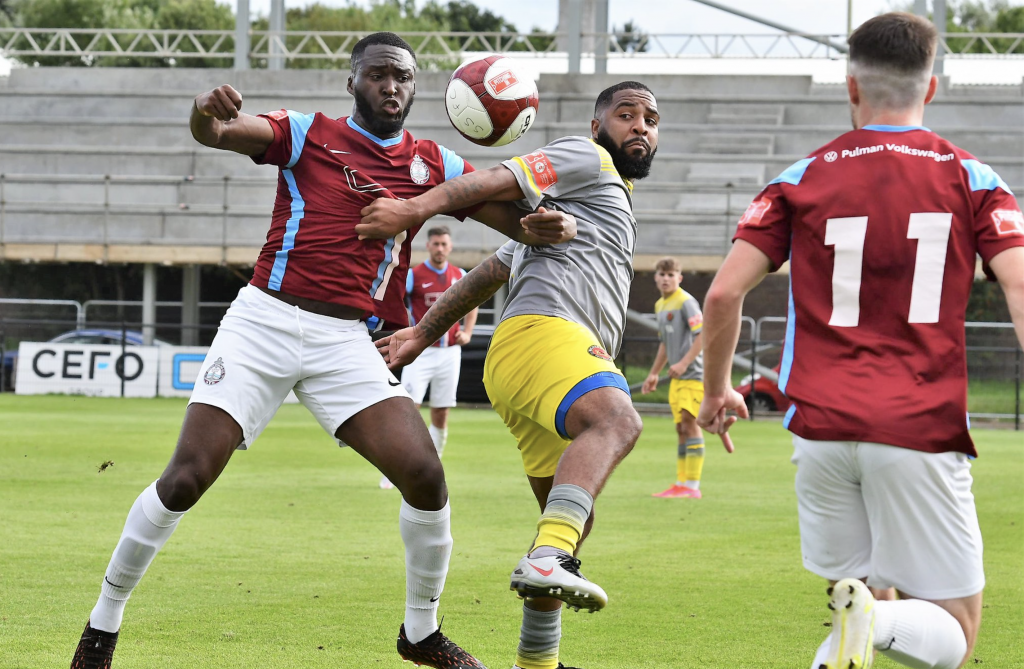 It was always going to be tough visiting South Shields for the first game of the new NPL season, but for 33 minutes Mickleover held off the hosts challenge.

Callum Hawkins was under attack in the Mickleover goal from the word go, pulling off a save from a 20 yard strike from Darius Osei.

Only three minutes later he was in action again, collecting a Nathan Lowe free kick. It wasn’t one-way traffic however, but skipper Mason Warren found himself on the end of a foul by Blair Adams, which earned the South Shields defender a yellow card.

The hosts had a positive attack down the right wing 12 minutes in, but the final ball was too long. Three minutes later Phil Watt joined Adams in the book, after bringing down Osei in full flight.

Rob Briggs took the free kick for South Shields, which Hawkins had covered as it went just over the bar.

As the first half hour was completed however, Mickleover were forced to make a change with Kemy Agustien coming on for Warren.

The hosts were on the on the attack again though and just after Adams had a shot blocked, he collected the ball again from the left and sent a scorching shot out of Hawkins reach into the top corner after 34 mins, 0-1.

There was a chance for Mickleover to bounce back, when a mix up in the hosts defence left Dec Bacon with a one on one on Myles Boney in the South Shields goal. His initial effort was saved, but he collected the ball again and had his shot tipped over.

Briggs shot just past the post after 40 mins and Hawkins had to pull off another save, diving to his right to keep out a 15 yard free kick from Lowe.

Into injury time for the first half it could so easily have been level again, as Stuart Beavon’s header went close after collecting a cross from the right.

Only three minutes into the second half it was 0-2 though, when debutant Ntumba Massanka met an Adams cross. Six minutes later it was South Shields third and Massanka’s second, after Osei’s initial shot was blocked, then fell kindly for the striker to hit the roof of the net 0-3.

The hosts had a penalty appeal turned down after 61 mins and Hawkins saved well again from a Briggs header seven minutes later.

In the closing minutes Bobby Battisson was booked for a trip and on Conor Tee and in the final seconds Sports saw their last attempt skim the crossbar.